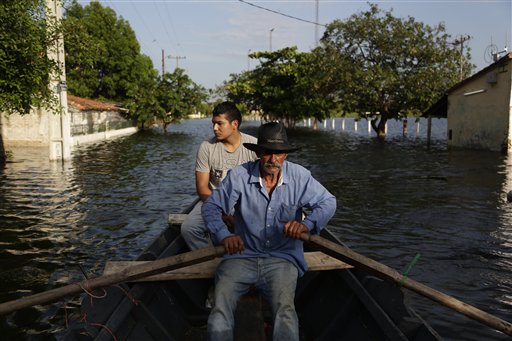 Victor Ferreira, who is displaced by flooding, rows his boat through the streets of his Jukyty neighborhood in Asuncion, Paraguay, Wednesday, Dec. 23, 2015. The Paraguay River is at its highest level since 1984 and threatening the poor districts that surround the capital, forcing about 100,000 people to shelters. (AP Photo/Jorge Saenz)

BUENOS AIRES, Argentina (AP) — Widespread floods have forced nearly 140,000 people from their homes in Paraguay, Argentina, Uruguay and Brazil following days of torrential rains that drenched a region where the countries border each other.

Paraguay is the hardest hit with at least 100,000 evacuating according to the National Emergency Department.

Argentina’s state-run news agency Telam reports that 20,000 people suffered the same fate in that nation, while Uruguay’s National Emergency System says some 9,000 were displaced by rivers that overflowed their banks.

The civil defense department in the southern Brazilian state of Rio Grande do Sul says at least 7,000 people had to leave their homes.