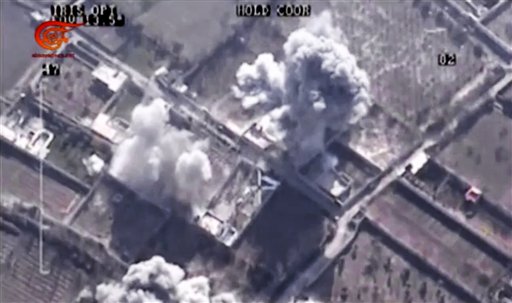 This image made from video made available on Saturday, Dec. 26, 2015, by Al-Mayadeen, government-controlled Syrian Television, which has been verified and is consistent with other AP reporting shows, drone footage allegedly showing Syrian army airstrikes targeting Zahran Allouch, the head of the Army of Islam group near Damascus, Syria. Militant groups in Syria on Saturday mourned the death of a powerful rebel commander who was killed in an airstrike near Damascus  a high profile assassination that may shift the balance of power in rebel-held suburbs of the Syrian capital. Allouch, was killed Friday, Dec. 25 in an airstrike that targeted the group's headquarters during a meeting. (Al-Mayadeen via AP video)

BEIRUT (AP) — The assassination of a top Syrian rebel commander who led one of the most powerful groups battling President Bashar Assad’s forces has dealt a significant setback to the opposition that could reshuffle the lineup of key players on the ground ahead of the planned peace talks in Geneva next month.

On Saturday, the Army of Islam and allied militant groups in Syria mourned the killing of Zahran Alloush, while government supporters and the Islamic State group cheered his death — a reflection of his role in fighting both sides in the Syrian civil war.

Allouch was killed in airstrikes that targeted the group’s headquarters during a meeting on Friday. He was instantly killed along with a number of senior commanders of his Army of Islam group and those of the ultraconservative Ahrar al-Sham and the Faylaq al-Rahman groups.

The Syrian army claimed responsibility for the airstrike that killed Allouch, although many among the opposition blamed Russia, which has been bombing IS targets and other insurgent groups since late September.

Allouch was a controversial figure in the war and an authoritative rebel leader who commanded thousands of fighters on the doorstep of Damascus, the seat of Assad’s power. His death may have contributed — at least partially — to a delay in an agreed-on pullout of thousands of militants and their families from neighborhoods on the southern edge of Damascus.

The pullout, supposed to start on Saturday, was to involve mainly militants from the Islamic State group who earlier this year overran the Yarmouk area, which is home to a Palestinian refugee camp and has been hotly contested and fought-over in the war, and two adjacent neighborhoods.

A Palestinian official in Damascus, Anwar Abdulhadi, told The Associated Press that the withdrawal is being delayed for “logistical reasons.” But Lebanon’s Hezbollah-run TV station Al Manar said that Allouch was a key figure in arranging the rare deal, and that his assassination has delayed its implementation. The report could not be immediately confirmed by the AP.

Allouch’s killing — a month before peace talks are scheduled to begin between the Syrian government and opposition rebel groups — is a blow to insurgents fighting to topple Assad and a boost to government forces who have been bolstered by the Russian military intervention in Syria.

The Army of Islam took part earlier this month in an opposition meeting held in Saudi Arabia during which it agreed to take part in political talks seeking to end the five-year-old conflict scheduled for late January in Geneva. The Syrian government describes the group as “terrorists” and has said it will not negotiate with such factions.

The U.N. envoy for Syria, Staffan de Mistura, said Saturday that he has set a Jan. 25 target date for the talks in Geneva and said developments on the ground “should not be allowed to derail it.”

Anas al-Abdeh, a senior member of the main Western- backed opposition group, the Syrian National Coalition, said the assassination “makes a mockery of all talk of a political settlement” and undermines the “negotiations before they begin.”

Several opposition groups also mourned Allouch’s death and accused the government and its allies of trying to eliminate rival groups ahead of the talks. Several rebel leaders have been killed since Russia’s aerial campaign started on Sept. 30 in support of ally Assad, although Moscow has insisted that it is concentrating its attacks on Islamic State.

“Rebel groups should realize they are facing a war of extermination by (Russian President Vladimir) Putin’s regime,” said Labib Nahhas, a senior member of the militant rebel Ahrar al-Sham group.

Abu Hassan al-Muhajer, another senior member of Ahrar al-Sham, wrote on Twitter that the “next stage will witness the liquidation of those leaders who began the uprising” against Assad. Other insurgents, including the al-Qaida branch in Syria, the Nusra Front, also lamented the killing.

The Army of Islam swiftly appointed Essam al-Buwaydhani, a field commander known as Abu Hammam, as Allouch’s successor, and posted a video on the Internet late Friday saying Allouch’s killing “will only increase our fight” against Assad’s government and the Islamic State.

However, Aron Lund, a Syria expert, said the death of Allouch, who led the Army of Islam since it was founded around four years ago, could amount to “a decapitation strike” for the group.

“Add to that the fact that the Islam Army’s dominance has created so much resentment among other factions over the years, and the situation seems very unstable,” Lund wrote in an analysis for the popular Syria Comment blog.

A former Islamist prisoner who was released in a general amnesty after the uprising against Assad began in March 2011, Allouch, who is in his mid-40s, joined the armed opposition and formed the Army of Islam — which soon became one of the most organized rebel factions in Syria, based in the Damascus suburb known as Eastern Ghouta.

He reflected the difficulties in identifying moderate rebels from extremists and other militants in Syria. He was widely known to be supported by Saudi Arabia and Turkey but also fought pitched battles against rival Islamic State group near Damascus, with many crediting his group for keeping IS from making further advances toward the Syrian capital.

But critics accused him of sectarian politics and brutal tactics similar to that of the Islamic State group.

He is blamed by other opposition groups for the December 2013 disappearance of four prominent activists, including human rights activist and lawyer Razan Zaytouni. He has denied holding them, although they were abducted from an area under the control of the Army of Islam.

Government supporters also celebrated his death, blaming his group for regularly shelling residential areas in Damascus. The state-run SANA news agency said nine civilians were killed and 18 were wounded later Saturday by mortar shells fired by the Army of Islam on districts in and around Damascus.

After nightfall, the Army of Islam claimed on its Twitter account that it has attacked a checkpoint near Damascus, killing 28 Syrian troops. The AP could not immediately confirm the claim. The group also posted a video message by its new leader, showing him with a long beard and in a uniform, pledging to continue on the same path as Allouch.

Earlier this year, after government airstrikes on the suburbs of Damascus killed dozens, Allouch’s fighters forced some Alawites whom his group was holding into cages that were then displayed in public areas and markets, using them as human shields to try to prevent further airstrikes. Alawites are a Shiite offshoot to which Assad’s family also belongs.

The large metal cages with men and women inside were then put on pick-up trucks that drove around Damascus suburbs.

Though delayed, the agreed-on evacuation of insurgents and their families from several neighborhoods of southern Damascus could further bolster Assad’s hold over the capital — if it goes through.

The pullout, which was supposed to start on Saturday, was to involve mainly Islamic State militants who were holed up near the capital.

Alloush’s death leaves so much up in the air, Lund wrote, especially in the Damascus suburbs of Ghouta.

“If it leads to instability and infighting among the rebels, or weakens command and control in the Ghouta, we could start to see a shift in the balance of power in the Syrian capital over the coming months,” he said.