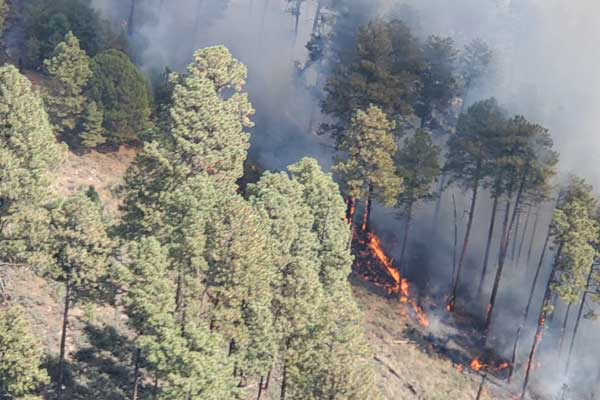 Smoke from the Cow Canyon fire in the Blue Primitive Area of the Apache-Sitgreaves National Forest is making its way into the Gila Valley, creating hazing conditions. - Contributed Photo/ASNF

THATCHER — Graham County is experiencing smokey conditions as a result of a wildfire near the New Mexico border.

Meteorologists from National Weather Service in Tucson said winds are carrying the smoke into the Gila Valley from the Cow Canyon fire, located in a remote location of the Blue Primitive Area of the Apache-Sitgreaves National Forest.

The wildfire, which started from a lightning strike Aug. 18, has burned about 9,000 acres and is at 18-percent containment.

A total of 13 firefighting personnel have been assigned to the blaze; however, due to the lack of precipitation the area has received — and a forecast without any rain in the near future — full containment is not expected until Oct. 31 at the earliest.