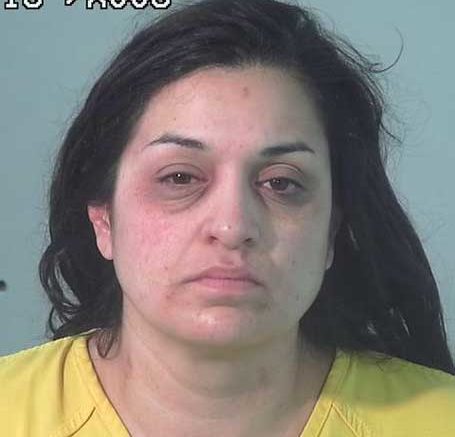 Contributed Photo/Courtesy GCSO: Trina Roybal was booked into jail on drug charges after drawing police attention by driving at night without her headlights activated.

SAFFORD – A small-time heroin and methamphetamine dealer was apprehended late Sunday night after she was seen driving down U.S. Highway 70 without her headlights activated.

According to a Safford Police report, an officer was at 20th Avenue and U.S. Highway 70 at about 10:34 p.m. when he saw a tan car eastbound without its headlights lit. The car turned south on 20th Avenue and then into the Walmart at 755 S. 20th Ave.

After turning into the Walmart, the car’s headlights turned on and it continued into the parking lot. At that point, the officer initiated a traffic stop and contacted the driver, Trina Marie Roybal, 39, of Safford.

Roybal appeared to be under the influence of some substance, according to the report, and freely admitted to ingesting methamphetamine earlier in the day.

County Dispatch then alerted that Roybal had a warrant for her arrest on a petition to revoke probation stemming from a possession of methamphetamine for sale charge and she was placed under arrest. Roybal was previously released from prison after serving a 3.5-year sentence regarding the drug sale charge. She was released in April 2016 and had her first probation revocation petition issued Feb. 22, 2017.

While being taken into custody, the officer noticed a small plastic baggie on the driver’s seat that appeared to contain heroin. Roybal admitted it was the narcotic drug and said it weighed 1.5 grams. She allegedly said the heroin was in her jacket pocket and fell out onto the seat. A further search of the car yielded a spoon with apparent burned drug residue and a cut straw.

After initially denying dealing, Roybal allegedly admitted to selling meth to support her own drug habit. Her confession was backed up by text messages discovered on her cell phone.

The drugs, paraphernalia and cell phone were seized as evidence and Roybal was booked into the Graham County Jail on her warrant. A subsequent new petition to revoke her probation was then filed the next day.