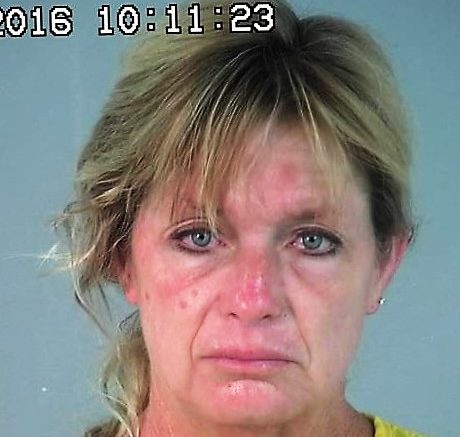 Contributed Photo/Courtesy GCSO: A traffic stop for a moving violation resulted in the arrest of an alleged meth dealer for drug charges.

GRAHAM COUNTY – An admitted meth dealer was sent to jail July 14 after being stopped for failing to initiate her turn signal in a timely manner while operating a motor vehicle.

Cynthia Louise Borns (also known as Cutter Sollers), 55, of Graham County, was arrested and booked into the Graham County Jail on charges of possession of a dangerous drug and possession of drug paraphernalia. A charge of DUI-drugs is pending the results of a test of her urine sample by the Arizona Department of Public Safety’s lab in Tucson.

According to a Safford Police report, Borns was northbound on U.S. Highway 191 in a blue Dodge truck when she turned right onto E. Swift Trail Lane without first initializing a turn signal at the legally required 100-foot minimum distance from the turn. The officer noted the turn signal did come on just before Borns made her turn.

After giving Borns a written warning for the moving violation, the officer, who previously received information Borns was involved with the drug trade, asked if there was anything illegal in the truck. Borns denied having any drugs or weapons and gave permission to search the vehicle, according to the police report.

During the search, the officer located a glass methamphetamine pipe with drug residue and several small seals with residue inside Borns’ purse. After initially denying the items were hers, Borns allegedly admitted to smoking meth earlier that day and that she used the pipe in question. After being warned of the repercussions of taking drugs into the jail, she also produced a small quantity of meth she had hidden in her bra.

Borns allegedly admitted to the officer that she deals meth to get by. The officer said she had been pretty lucky not to have been apprehended for such a long time and Borns allegedly agreed with his statement.

After inventorying the drugs and paraphernalia, Borns was booked into the jail without incident.