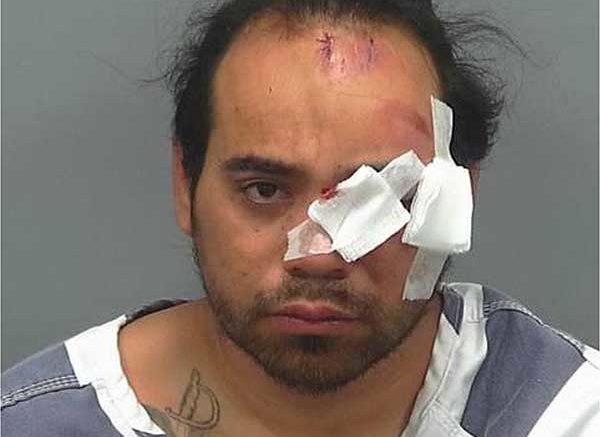 What should have been a simple case of shoplifting escalated into aggravated assault when a man refused to cooperate with Police on Sunday morning.

Richard Rodriquez had allegedly been caught on camera taking a bottle of Tequila Rose from the liquor isle at Walmart and consuming it in the store as he stood in the computer isle. The responding officers reported that Rodriguez appeared intoxicated and smelled of alcohol. One of the officers asked Rodriguez to surrender the bottle of alcohol he had concealed in his pants. Rodriguez was non-cooperative and stated that he had to log out of the computer first. After being asked repeatedly, Rodriguez removed the concealed bottle and handed it to one of the officers.

Rodriguez began throwing up his arms and told the officers to let him close his account. One of the officers told him that he was about to handcuff him, to which Rodriguez reportedly replied, “If you want to (expletive deleted) get into it, we can get into it.”

Rodriguez reportedly tensed up and braced himself against the computer display shelving as the officers attempted to handcuff him behind his back. Three officers were forced to wrestle him to the floor in an effort to subdue him and cuff him. Rodriguez continued to struggle, and punched one of the officers in the jaw and grabbed his neck, pulling down on the collar of the officer’s body armor. He tried grabbing the officer’s taser, then went for his firearm.

The officers finally succeeded in rolling the suspect over on his side and placed the cuffs on his wrists. Rodriguez continued to be belligerent and non-compliant as the officers tried to constrain him. He was bleeding from his mouth and spitting blood at the them. A fourth officer arrived on the scene and used his taser on Rodriguez but it seemed to have little effect. Police finally resorted to carrying him toward the front of the store, but as they approached the clothing section, Rodriguez began screaming that he couldn’t breath and bit one of the officers on the leg, which caused the officer to lose his grip on the suspect. This resulted in Rodriguez being dropped and hitting his head on the concrete floor.

Rodriguez was now bleeding from his left eyebrow. He said he wanted to stand and walk out like a man, but when the officers stood him up, he tried biting another officer, who deflected his advance, sending Rodriguez to the floor again, causing him to hit his head a second time on the floor.

The officers finally resorted to carrying the suspect out of the store where they kept him until an ambulance came to transport him to Mount Graham Regional Medical Center where he was treated and released.

Rodriguez was trespassed from the store, arrested and booked into the Graham County Jail on charges of theft, aggravated assault, resisting arrest and disorderly conduct.