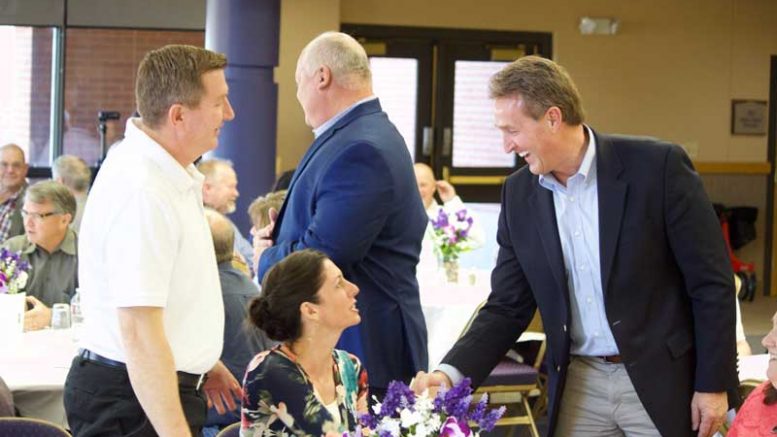 THATCHER – It was a who’s who of local government leaders at the Graham County Republican Party’s annual Lincoln Day Lunch at Eastern Arizona College on Monday, and featured speaker Senator Jeff Flake didn’t pull any punches. 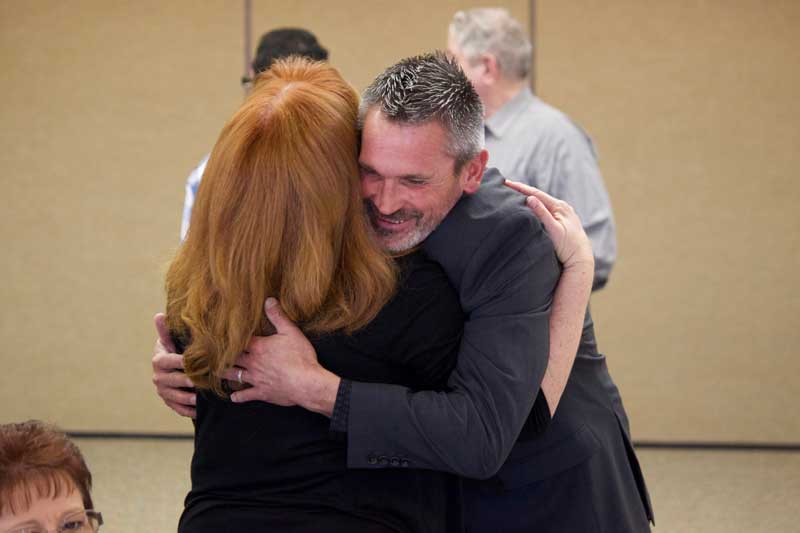 Flake was the featured spoke for about 30 minutes on a variety of topics, including President Donald Trump’s cabinet and Supreme Court pics, reversing legislation made in the last months of former President Barack Obama’s administration, Arizona water rights, lowering the quota of Mexican Gray Wolves, bipartisanship, the necessity of freedom of the press, the Russian election scandal and the infamous border wall. 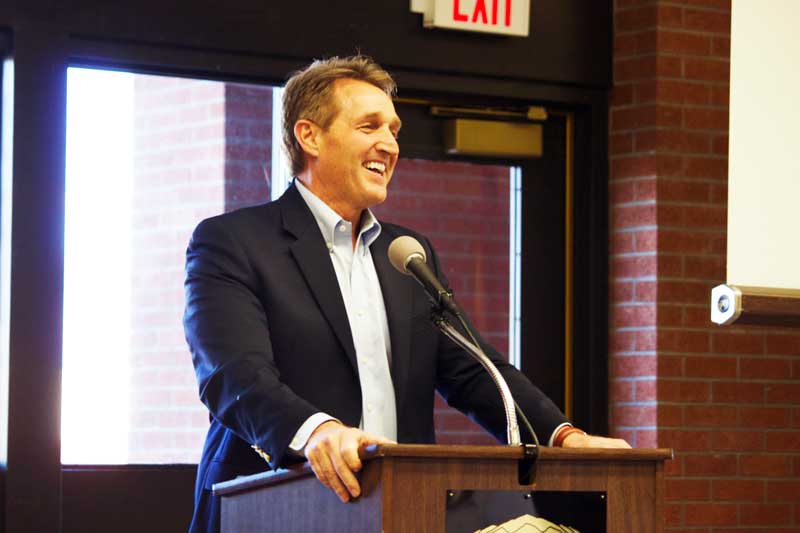 Jon Johnson Photo/Gila Valley Central: Senator Jeff Flake regales the crowd with some of his stories.

“Nowadays we don’t get a lot of opportunities to have that face-to-face contact with our elected representatives, so we’re grateful he came,” Alexander said. 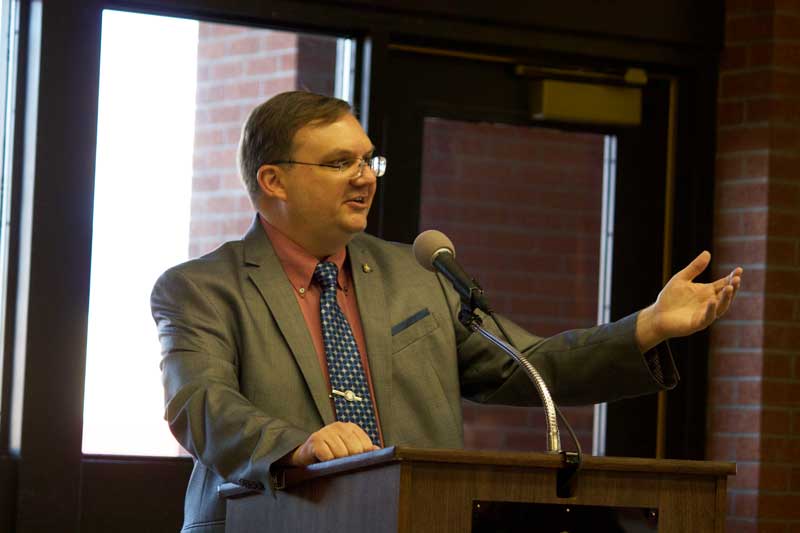 “Without you, we couldn’t be getting quality Republicans elected in our county and statewide,” Rhodes said. 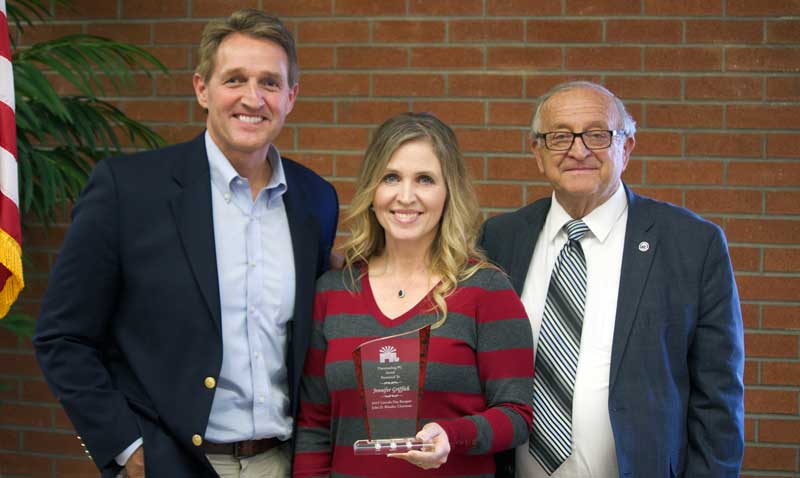 Flake regaled the crowd with quips of not being recognized on the same flight as Senator John McCain, “That’s my lot in life. I’m the other senator from Arizona,” and segued from a story about intentionally being stranded on a deserted island with New Mexico Democratic Senator Martin Heinrich to address his new position on the water subcommittee of the Natural Resources Committee and how Arizona is preparing to handle water shortages in the Colorado River Basin due to drought. “Stephen Colbert ran a clip of us out there surviving and said ‘Jeff Flake and Martin Heinrich proved once and for all Republicans and Democrats can get along when death is the only option.’ For what it’s worth, that has been proved.”

Flake also spoke about his legislation proposing to split the U.S. Court of Appeals for the Ninth Circuit and create a 12th circuit court to likely include alike states akin to Arizona that have a large swath of land owned by federal, state, or reservations, including

“That would make a community of interest and would certainly be more relevant to have that as a new 12th circuit,” Flake said. 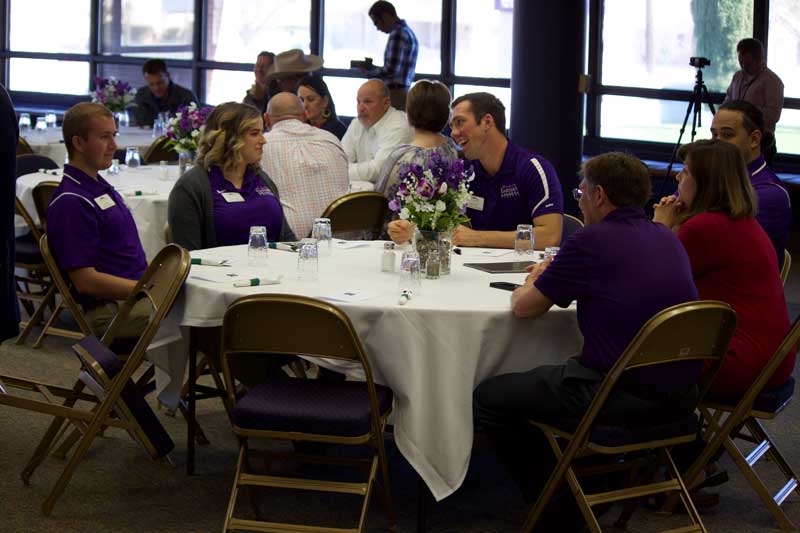 After his talk, Flake took some hard questions from the audience members. While he earlier expressed his pleasure at having a Republican president and praised Trump’s cabinet choices and Supreme Court nomination, he said he would not back a special prosecutor or special committee to look into President Trump’s ties to Russia or the election hacking scandal only because the intelligence committee was already doing so.

“Believe me, anybody who has listened to the classified briefing about what the Russians did during the election would support an investigation,” Flake said.

Flake also joined McCain in asserting the utmost necessity of the freedom of the press, which is counter to Trump’s recent comments on the press being the “enemy of the American people.” The phrase brought some journalists to compare Trump’s words to those of former Russian leaders Vladimir Lenin and Joseph Stalin, to whom journalists and intellectuals who didn’t share their point of view were among the most hated enemies. Former China dictator Mao Zedong also denounced anyone who criticized his policies and commands as “enemies of the people.”

“(The press) is completely vital (to democracy),” Flake said. “I agree with Senator McCain. You have to have a free press. That’s one of the best institutions to make sure that democracy holds.”

Flake also described the proposed border wall as being a variety of different border measures, including vehicle barriers in some places, fencing in others and manned posts, but that it will not be a solid wall throughout America’s southern border with Mexico.

“Walls are needed in some places, they aren’t in others,” Flake said. “A fence is adequate in some places or a vehicle barrier or simple surveillance, so the wall will look quite a bit different than a 2,500-mile single, big cement wall.”