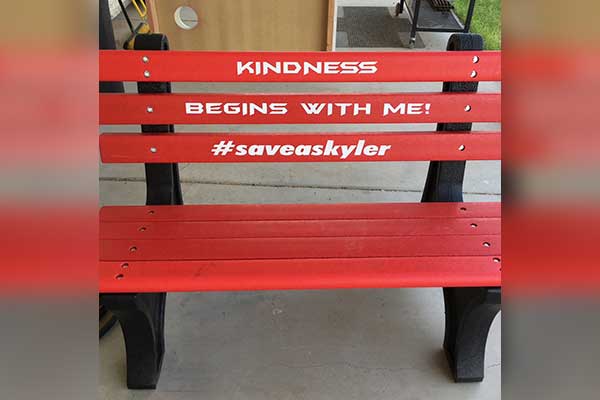 SAFFORD – A bright red bench with “Kindness Begins with Me” was dedicated at the Safford Boys & Girls Club Thursday afternoon. Funds to create the bench were raised by the Gila Valley Leadership Class 13 and the bench was donated to the boys & girls club. Patty Wren made a brief presentation and explained the purpose of the Save-A-Skylar campaign.

The room was dotted with people wearing red shirts that either said, “Kindness begins with me,” or “Just stop it.” Wren began her presentation by explaining that the campaign has changed its focus.

Wren told the group that focusing on what actually happened makes it easier for adults to react to the situation appropriately.

“We’ve shifted our whole focus of Save-A-Skyler to be more of a kindness campaign,” Wren said. “The bench is called the kindness bench now, and we’re giving it to you because we really think it’s important that you have a daily reminder to be kind to others.”

Wren explained that there are three primary reasons to sit on the bench:

If you need a friend

Wren told the kids that if they need a friend and sit on the bench, somebody might come sit by them and be their friend.

If you are a friend

“There might be somebody afraid to sit on the bench. And if they see you sitting there, they’ll think, ‘somebody needs a friend, or they want to be a friend. And they’ll go sit with them.”

If you do something kind for someone

“If you get here after school and you did something so awesome for somebody today. Sit on the bench and tell everyone. There’s nothing wrong with sharing some good news is there?”

Wren went on to explain the troubles her son had while in school that served as the catalyst for the Save-A-Skylar campaign.

“Skylar had a rough time at school,” she said. “Kids would pick on him a lot. They would kick him, trip him, punch him, call him names; it was an everyday occurrence. We started Save A Skylar because we thought it was important to change the direction for all the kids that might be feeling hurt, sad and alone, and feeling like nobody cares.”

She encouraged the kids to care for one another.

To close the dedication ceremony, the group sang happy birthday to Skylar

The bench will be placed outside in the playground. 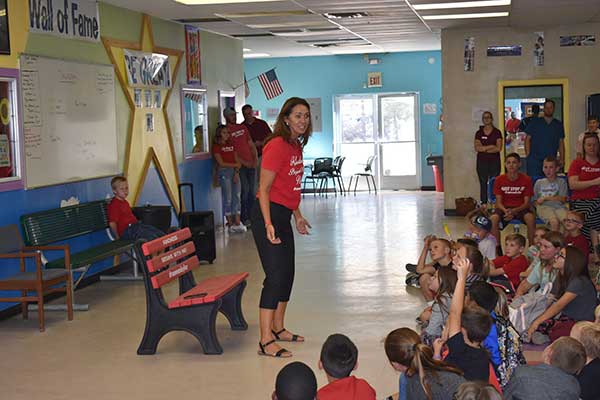