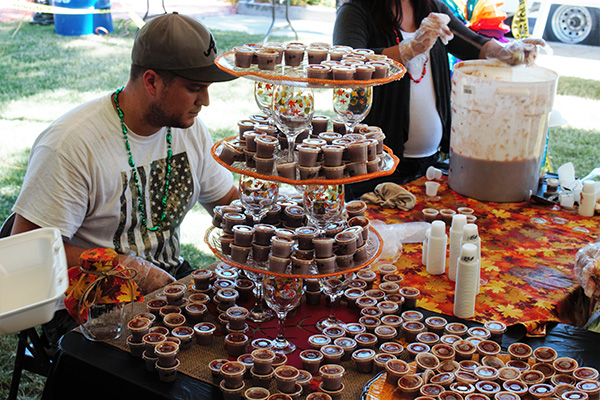 SAFFORD – Thousands of people descended upon Downtown Safford on Friday and Saturday for the 10th annual SalsaFest celebration.

People packed the venue to peruse the various vendors set up along Main Street, take in the classic car show, enjoy some kettle corn and let their children bounce to their hearts’ content.

The beer garden by the Graham County Chamber of Commerce was a popular addition in its new spot as music wafted from one venue to the next all the way down Main Street. Chamber Director Patrick O’Donnell helped man the garden.

“The music is really helping,” O’Donnell said. “So people will keep coming by to get their thirst quenched. 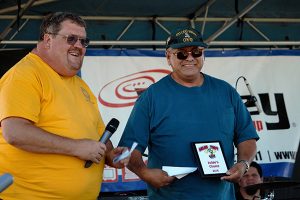 Then there was the salsa, and oh how the condiment flowed. Numerous teams competed in the salsa challenge, but the judges’ blind taste test somehow narrowed it down to three winners.

Jesse Baca, of Sahuarita, took home honors and a $500 check as the Judges’ Choice this year with his original home-spun salsa. Baca told Gila Valley Central that he has been making his salsa for friends and family for about 15 years, but, after seeing an article in a magazine about SalsaFest, his wife convinced him to enter the contest.

“I try to not make it real spicy,” Baca said. “I give it some flavor and thickness to its texture so it’s not watery.

“Everybody wants me to give it up, but I’m not,” Sainz said. 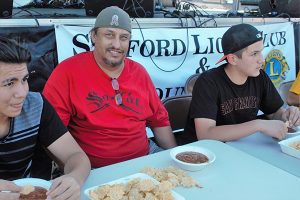 Jon Johnson Photo/Gila Valley Central: Raime Loya gets ready to blow away the competition in the salsa eating contest.

In the salsa eating competition, Raime Loya came back to put everybody to shame, finishing first by a landslide. However, the eight-time jalapeno eating champion settled for second place in that competition this year as Pedro Ogas gobbled up eight jalapenos to tie Loya. Afterward, Loya decided to not attempt to break the tie and conceded to Ogas.

“I’ve done this before,” Ogas said. “This was a rubber match. I had to prove a point.”

The SalsaFest is presented annually by the Safford Lions Club and its cadre of volunteers and sponsors.