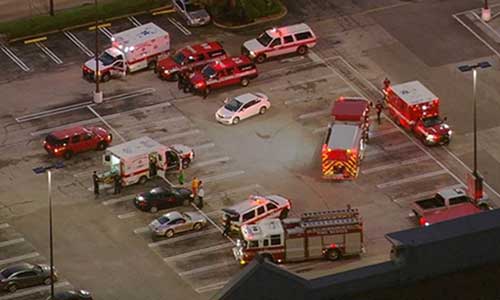 A disgruntled Houston lawyer on a shooting rampage wounded nine people Monday before he was fatally shot by police officers responding to the chaotic scene, police said.

Acting Police Chief Martha Montalvo said one victim was critically wounded and five others required hospitalization after the man opened fire at passing cars near the West University area of southwest Houston.

Police tweeted they were on the scene of an “active shooter incident” north of West University, then tweeted that a suspect “has been shot by our officers.” Later they tweeted that the shooter had died.

Montalvo said officers responded to 911 calls of a shooter in the neighborhood and quickly became the suspect’s target. Officers returned fire. The suspect, who she did not name, was a neighborhood resident and an attorney who was having problems at his law firm, Montalvo said.

She said police found numerous weapons at the scene. The suspect’s Porsche was being scrutinized by a bomb-squad robot, and she said the man’s apartment also would be thoroughly searched. Residents of a local condominium building were asked to shelter in place for several hours while the investigation was active.

There were no reports of other gunmen, Montalvo said.

Several ambulances and other emergency vehicles responded to the Randalls grocery store shopping center shortly at about 6:30 a.m. local time. Bellaire, West University and Houston emergency responders worked together to take the victims to area hospitals.

Eduardo Andrade, 42, told the Houston Chronicle he inadvertently drove his Audi A3 into the middle of the active shooter scene but was not wounded.

“I covered myself, accelerated and tried to get out of there. I did not know if someone was following me or trying to shoot me,” he said. “It’s so random, think of it, if I was driving a little faster or a little slower, the bullet would have had a different trajectory.”

Antwon Wilson, 30, told the Associated Press he also found himself driving into the shooting scene after dropping off his girlfriend at work. He fled to safety but could “literally hear the gunfire flying.”

“Please join me in keeping the victims of the shooting in Houston this morning in your thoughts and prayers,” Gov. Greg Abbott tweeted.