“We have a long way to go,” Tigers head coach Tylene Miller said. “Sometimes it’s just enough to get by. We’ll keep improving.”

Since being eliminated by Fredonia in the first round of the 2007 state meet, with San Simon ending as state champion in five sets over Mogollon, the Tigers have finished no lower than the quarterfinalists during the previous nine seasons. 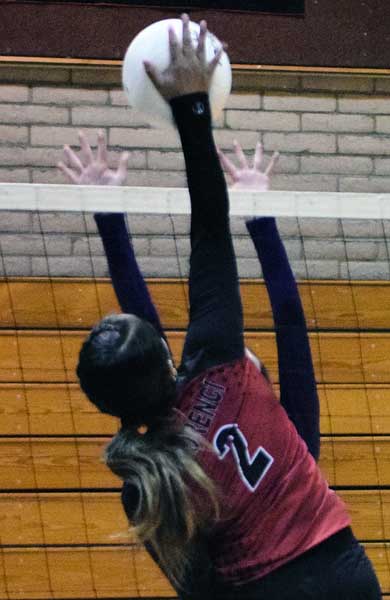 Photo By Raymundo Frasquillo: Diminutive Morenci senior Destiny Apodaca (No. 2) leaps up in the air to spike the ball against a Benson defender during round-robin pool play. She was one of two Wildcats selected to the all-tourney team of the all-day 16th Morenci Invitational volleyball tourney Sept. 2.

Saint David edged second seed Benson in two sets, 25-23 and 27-25 during the semifinal, and ousted sixth seed New Mexico Lordsburg by identical 25-13 set scores during the first round of bracket play.

Morenci upset top seed New Mexico Bayard Cobre in two sets, 25-21 and 25-22, during the other semifinal, and came from behind to eliminate fourth seed Miami in three sets, dropping the first 19-25 and taking the next two 25-23 and 15-12, to advance to the championship match.

Selected to the honor team of the 16th Morenci Invitational meet, by vote of participating head coaches, were Jaylin Richardson and Kourtney Trejo of Saint David, Destiny Apodaca and Alexis Gregory of Morenci, Emily Darwin and Emmarae Wilson of Benson, Amaya Jacquez and Liza Ortiz of Cobre, Jayden Allinson and Anna Meredith of Miami, and Gabby Artiaga and Makenzie Evans of Lordsburg.

The Cobre Indians and the Benson Bobcats both posted 4-1 records, with the Indians getting the top seed via a 30-27 head-to-head win over the Bobcats. Saint David went 3-2, Miami and Morenci both 2-3, and Lordsburg 0-5.

A first-time lineup was on the court together for the scrimmage with the visiting New Mexico Silver High Fighting Colts a week earlier.

“We just have to tweak a little here and there,” second-year head coach Rhyanna Mennen said following the scrimmage.

The program has been improved considerably with the addition of an off-season fundamentals camp, attended by 16 of the current 28 members listed on three teams.

The Wildcats (5-5 overall, 1-1 for seeding) visit Miami Tuesday (Sept. 5) for varsity, junior varsity, and freshmen matches. The next home match is with Benson Sept. 12.