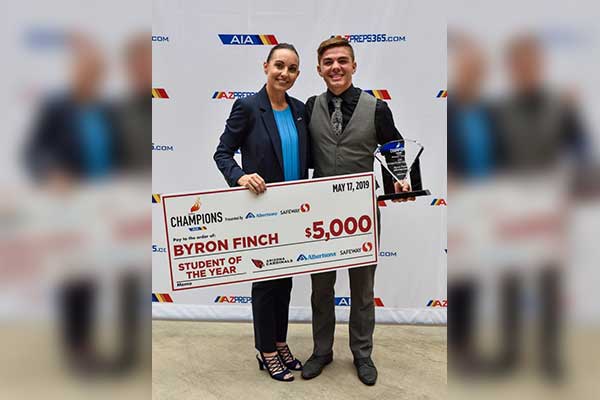 Byron McKade Finch, or just McKade to those that know him, knew he had been nominated for an award at the annual Arizona Interscholastic Association’s Champions Luncheon. He and his family made the trip to State Farm Stadium last Friday for the festivities. The 1A-3A scholar athlete category had come and gone without a mention of Finch. “I was happy being nominated, I didn’t see any other trophies sitting on the table. I thought it was over,” said Finch in a phone conversation earlier this week.

Little did he know that his named would be called just seconds later as the Male Student Athlete of the Year. The most prestigious award handed out at the ceremony. Finch then had to compose himself and accept his award and $5000 check from the Arizona Cardinals and Safeway.

The AIA website lists the following qualifications for being nominated for this award: Positive model for others. High levels of integrity. Must be a graduating senior with a cumulative GPA with no less than 3.75 on a 4.00 scale unweighted. Must be a varsity participant for at least two years. Good record of citizenship.

Finch embodies every one of those qualities according to Safford Athletic Director Toni Corona, who nominated Finch for the award. “I’ve been waiting for two years to nominate McKade for this award,” said Corona. “He’s a stellar young man and well deserving of this award.”

As you can see from the nomination letter, Finch has had a very accomplished career at Safford High:

Throughout his career at Safford High School, Byron (McKade) Finch has been an exemplary person on and off the field of competition. In athletics, McKade is one of the handful of athletes in statewide history to have earned and won the Division III State Wrestling Title four years in a row! He has been awarded the “Mile High Outstanding” Wrestler Award and earned the “Dan Penrod Inspirational” Award in 2019. Being a four time State Title holder is rare and Bryon definitely gave it all his heart. Byron is also a four year letterman in State Track & Field; who took home 4th place in pole vault.

McKade has maintained a 3.85 GPA throughout his high school career as well as served on the National Honor Society, FBLA, Boy Scouts of America, American Red Cross, Leo’s Club International, Safford High School Band, Safford Choir, and accumulated countless hours of community service. No matter the environment or activity, McKade always demonstrates the utmost integrity and leadership through his own hard work, dedication, and sportsmanship. He leads by example! He regards the principles and values taught through his participation in athletics as the most valuable lessons learned in his life.

Outside of the school setting, McKade is an active member of his community, working with a variety of organizations volunteering at the local Boys’ and Girls’ Club, Special Olympics, organizing fundraising events, and facilitating service projects. His enthusiasm and greatness extend into the classroom as well. Always striving to go the extra mile, McKade successfully completed higher level courses at the local college to challenge himself by expanding his knowledge and skills, improve his GPA, and get a head start on his future college endeavors. McKade is an honorable, educated and respected young man — he is the epitome of perseverance and honor!

When asked about his best accomplishment, some might be surprised by Finch’s answer. It wasn’t being a 4-time state wrestling champion but instead being named Drum Major of the marching band this year.

Finch hasn’t decided on where he will go to college yet but he does know he will be studying Pre-Med. He’d like to wrestle or pole vault at whichever college he attends but says that he won’t let an athletic scholarship stand in his way to attend the college of his choice.