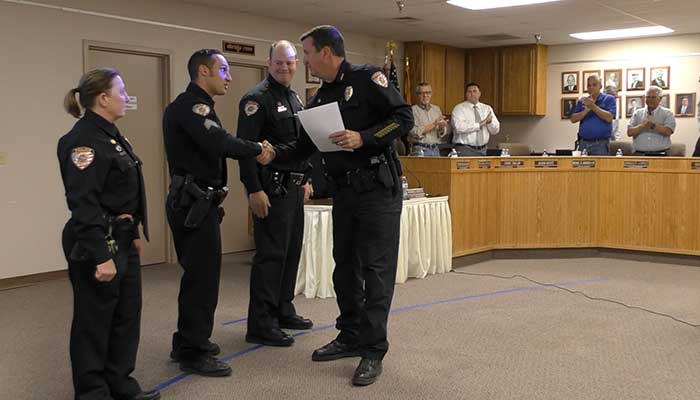 Safford – Three Safford Police officers were presented to the city council in recognition for their prompt actions that saved the life of a 1-month-old infant.

Mayor Jason Kouts began the presentation by commenting on the quality of the Safford police officers. “We’re right up there with the top dogs,” Kouts said. “Chief, I appreciate you, and I appreciate your men and women. Thank you!”

Police Chief, Joe Brugman, made the presentation. Here is a transcript of his comments:

Mayor, thank you very much and I completely agree with you. I’ve had the opportunity to work around parts of the state and visit virtually every agency in the state and I would take these men and women over anyone.

On January 25, at approximately 11:10 a.m., Safford officers were dispatched to a home in our community in reference to a young child who was almost one year old that was not breathing. Officers Tyler Cluff, Sherri O’Neal, and Sergeant Randy Loya quickly arrived; so quickly, in fact that the one was there approximately one minute after the call was put out. The officers quickly began administering resuscitation efforts. Assessing the situation, they realized that that the ambulance wasn’t there yet and was not going to be there for some time.

Our officers recognized the fact that the child was in immediate need of special care and made the decision – the proper decision – to transport the child to the hospital immediately. While officer Cluff drove, Sergeant Loya handled necessary communications, and Sherri O’Neal continued to provide CPR throughout the transport on the way to the hospital. I imagine this transport was done expeditiously. We’ll just leave at that, right? And it needed to be. The baby was delivered to the emergency room staff.

Today I had an opportunity to speak to the child’s mother, Julie Brown. She was unable to be here today. She’s in Phoenix with her young child, Breilyn. The child is doing well as far as from the injuries. It’s expected that the child would have passed away if the officers hadn’t taken the actions they did. At least the child would have suffered severe brain damage from lack of oxygen. Although Ms. Brown was unable to be here, she asked that I pass on her appreciation to all the officers and the entire staff of the police department.

It’s clear that the actions of these three saved this child’s life. Officers Cluff, O’Neal and Sergeant Loya will each be presented with a lifesaving medal and ribbon for their actions, which they’ll be receiving at a later date. I’d like to present them to you and the citizens of Safford in recognition of their great effort, and great work.

You can read the story Here: