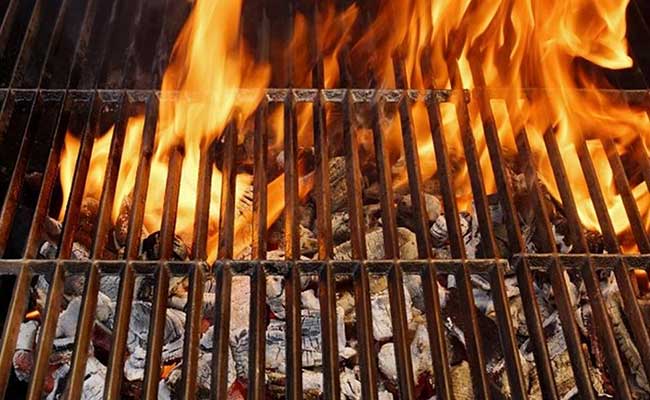 Safford police were dispatched to Walmart last week to investigate the theft of an expensive bar-b-que grill from the Garden Department. The responding officer met with an asset protection manager who showed the officer a series of still photographs of a white or Hispanic male entering the store through the Front entrance about 7:30 PM. The suspect was wearing a blue Cowboy’s hat low on his head, which hid his face. However, a large tattoo on his right shoulder ranging from the top of his shoulder to his elbow was clearly visible.

Surveillance footage showed the man pushing the grill in a cart to an employee only exit located near the Tire and Lube Center. The suspect loaded the grill into an older two-toned Ford truck, which met him outside the exit. Once the grill was loaded into the truck, it drove away with the alleged thief.

An officer drove to the gas station while speaking with the asset protection manager on the phone. When he arrived, he observed the white sedan waiting to exit onto 8th Avenue. The officer observed that a woman was driving and that the male passenger had the same tattoo and hat seen in the surveillance photos.

The vehicle turned north on 8th Avenue and the officer conducted a traffic stop. When the officer approached the vehicle, he observed that both occupants were known through prior contact. The passenger, identified as Randy Morales, was asked to exit the vehicle. The officer showed him one of the still photos provided by Walmart on the night the grill was stolen and asked if he was the man in the photo. According to the police report, Morales paused for about a minute, then finally admitted that it was him. He told the officer that he had just had a baby with the woman driving the car and wanted to make everything right.

The officer asked the woman driving the car if she knew anything about the recent thefts. The replied that she did not know anything about them and assured the officer that no stolen items would be found in her car or at her home. She further stated that she had just had a baby 5 days prior and didn’t know about any thefts. She was released and allowed to leave.

The officer took Morales to the area of Glenn Meadows park where he had told the officer he sold the grill. Morales told the officer the name of the man who bought the grill but wasn’t sure which house he lived in. Police made contact with the man by phone who said he was not home but promised to contact authorities when he arrived home.

Morales was transported to the Safford Police station where he was questioned further about the theft.  He apparently told police that he was high on meth on the night the grill was stolen and his recollection of the events was not very clear. He told police that he entered Walmart that night to make some money and have somewhere to stay that night. He claimed that he did not have a plan when he picked up the grill and found the employee exit by coincidence while walking through the store. He said that he made a call in the store and told the person driving the Ford truck where to pick him up. After he took the grill, he allegedly had a friend make calls to find out who wanted to buy a grill. He said that he and the driver took the grill to a residence and sold it for $250.00. After receiving the money, he reportedly paid somebody to allow him to stay at their house.

The Walmart asset protection manager had told authorities that he believed Morales was also involved in the thefts of two televisions in late July. Morales admitted that he had stolen them but was having a hard time remembering the exact events because he was high on meth. He said that he walked out the front entrance with the televisions and left them with a friend who was supposed to split $200 with him for each of the stolen televisions but he had not received payment yet. He refused to tell authorities who helped him with the theft out of fear of reprisal.