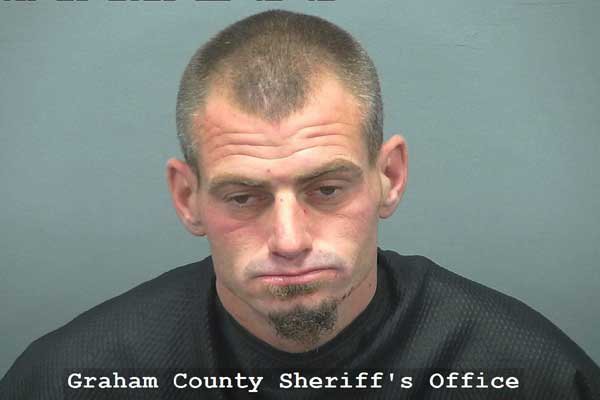 The first occurred when the victim claimed her ex-boyfriend was stealing things from her storage unit. Safford officers made contact with Travis Carter, who explained he was taking his items from storage.

However, Carter tried to hide a bag from the officers’ view, first claiming the bag only held tools. After giving permission for the officers to search, the bag was found to hold a small plastic bag with a controlled substance, a used hypodermic needle and cut straws with burnt ends.

A search after being taken into custody found two more needles and a pipe in Carter’s pockets.

He was booked into Graham County Jail on charges of possession of a narcotic drug and possession of drug paraphernalia. The County Attorney’s Office is reviewing the case for possible charges involving the storage unit.

In the other incident officers encountered Tevin Aranda, who appeared to be trying to avoid contact with the police by hiding in a canal by Safford High School.

A records check found an outstanding warrant and, after a search, a syringe and spoon were found in his pockets. Aranda reportedly admitted the “rig” was used for heroin.

He was taken into custody on the warrant and the County Attorney’s Office is reviewing the case for possible charges of possession of drug paraphernalia.