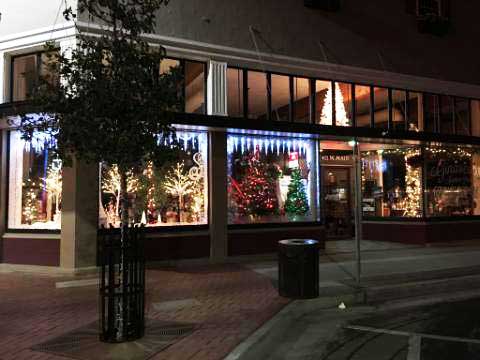 SAFFORD – Christmas decorations and a fair share of imagination and talent turned the Safford Main Street windows into imaginative works of art.

On Wednesday, the winners of the Safford Main Street window decorating contest were announced. Voting for the “Fan Favorite” window ended and was tallied, and the judges visited each of the contestant windows to decide on the best. There were several winning categories consisting of fan favorite, large/retail and small/service. To choose the fan favorite, the votes were tallied by counting Facebook “Likes.”

Ginaveve’s Market Place won the Retail/Large Window category. The main theme of Ginaveve’s window incorporated a winter wonderland and jolly little elves. Owner Jenny Howard said she designed and created the window decoration herself. Howard told Gila Valley Central that she didn’t have a background in art besides being a sketch artist and craft enthusiast, but that her window had been quite successful from a sales viewpoint. Out of the 14 elves that had been placed on the main rotating tree in the center window, only two remained. 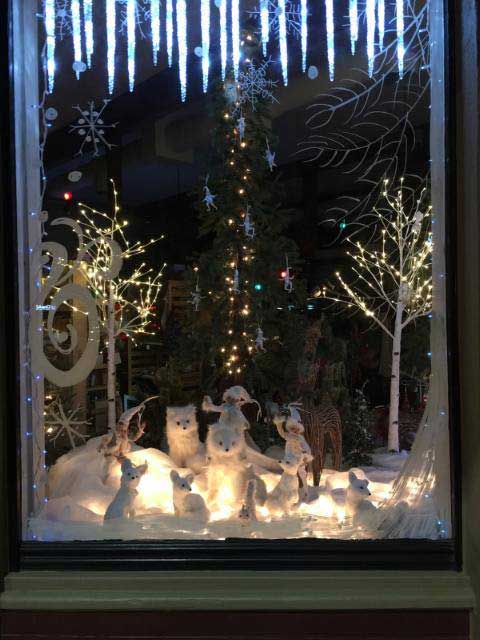 Contributed Photo/Courtesy Jenny Howard: Howard told Gila Valley Central that she drew the inspiration for the winter wonderland from her home sickness for the snowy state of Idaho.

“Kids love elves, and I just wanted to do something that when they walked by during the day or at night they would just stop, and it would mesmerize them,” Howard said.

When asked about her inspirational source, Howard said she grew up in Idaho and she missed the winters of snow and skating. She also credited the implementation of the elves to be one of the children’s favorites.

Decorating her windows every year, Howard already has plans for next year’s decoration.

“It will be a little warmer,” she said. 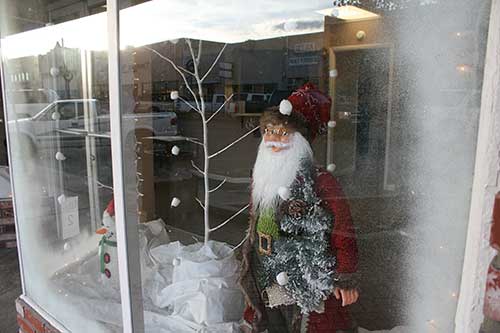 Brooke Curley Photo/Gila Valley Central: Santa looks out of the window from his winter wonderland of the Souder Miller and Associates, winner of the small window category.

The Service Small window category prize was given to the Souder Miller and Associates. The window was decorated by Denita Marble. Marble told Gila Valley Central that she wanted to incorporate the snowy wonderland theme as much as possible. Aside from Santa and reindeer, cotton balls on fishing line create the illusion of falling snow while real tree limbs provide a feeling of the forest.

“I have decorated windows for the company (before),” Marble said. “I think it’s a festive thing to do for a Downtown. I enjoy doing art.”

Marble said she appreciated realistic touches when it came to décor, and that’s what people associate certain feelings of warmth and familiarity with.

“It’s warm and inviting,” she said. “I try to think of what would draw people and I go from there. And I got the cotton ball off of Pinterest. I try to do things that are inviting for people.” 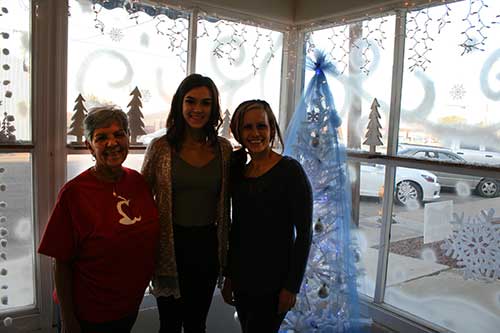 The winner of the Fan Favorite category was the Kinder Prep Academy. The Kinder Prep window had a “Frozen” theme, complete with snowflake cutouts and a white tree with blue lace. Although many windows are pleasing to look into, because of the tree silhouettes and swirling snow designs, the academy window was pleasing to look through from behind. Loretta Desaulniers, the owner of the preschool business, told Gila Valley central that the kids were ecstatic when they learned that their window had won.

“We stuck with the white theme,” Desaulniers said.  “And the kids did the cotton balls and strung it with fishing line. It was an art project for one of the days, and that was one of their contributions.”