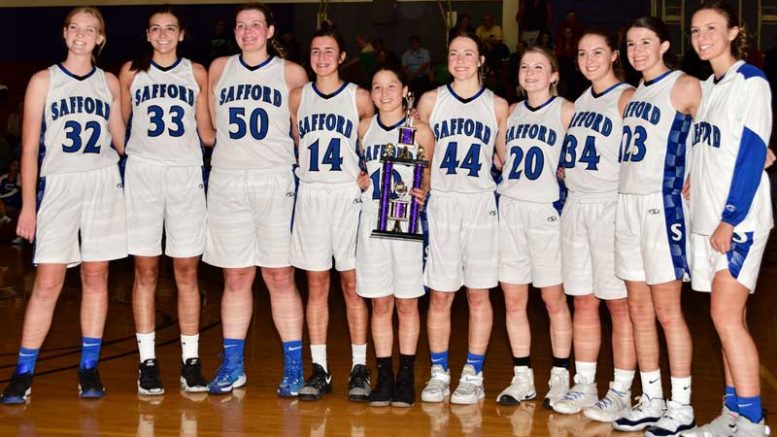 Photo By Raymundo Frasquillo: Safford hoisted the first-place trophy for the girls 42nd annual Eastern Arizona Holiday Tourney on Dec. 16 for the fourth time in a row. The Bulldogs topped Duncan 60-10 in round one Dec. 14, Pima 71-53 in the semifinals Dec. 15, and Thatcher 72-48 in the final. Members of the Robert Abalos-coached team are, from left, Rachel Fox, Aneesa Molina, Madison Mullins, Deon Abalos, Anna Montez, Jessica Bright-Schade, Brinley Kempton, Cambry Cluff, Mia Carter, and Jessica Maxwell.

THATCHER – The Robert Abalos-coached Safford Bulldogs outlasted the Thatcher Eagles, 72-48, in Guitteau Gymnasium on Dec. 16. The pairing was the title game of the 3-day 42nd Eastern Arizona Holiday Tourney and marked the fourth straight title for Safford. 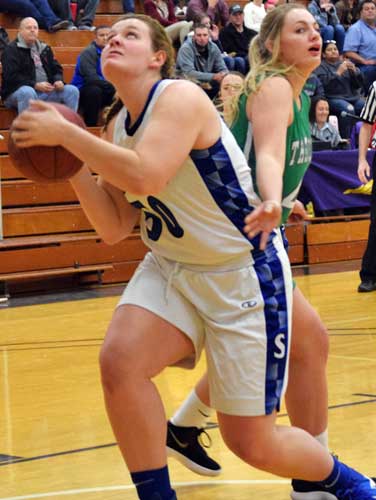 Photo By Raymundo Frasquillo: Safford 6’2″ senior forward Madison Mullins caught passes, turned, and took high percentage shots against Thatcher on Dec. 16. The Bulldogs topped the Eagles, 72-48, for the title. Mullins had 12 points and was selected to the all-tourney team.

Advancing in the consolation round were Cliff and Willcox, with wins of 52-8 over Duncan and 47-40 over Morenci, respectively.

“We have a big front court and our guards got them the ball,” Abalos said. “We stuck to our game plan.”

The result was high-percentage shot attempts and putbacks on rebounded missed shots.

Safford controlled the opening tip, reeled off three straight inside scores and a guard’s penetrating shot for an 8-0 advantage with 2:30 elapsed, and never trailed the entire game. Senior forwards, 6’2″ Madison Mullins and 6′ Aneesa Molina, accounted for the initial three baskets. Molina finished with a game-high 27 points and Mullins had 12. Junior three-year guard Deon Abalos put in the first two of her 16 points. 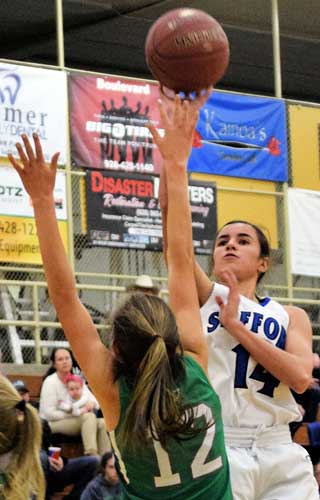 Photo By Raymundo Frasquillo: Safford 5’8″ junior guard Deon Abalos goes up for a shot attempt over Thatcher senior Corinne Bryce. Abalos, a three-time all-tourney selectee and co-MVP, and Bryce both scored 16 points during the championship. Bryce was also selected to the all-tourney team.

Thatcher scored its initial basket 20 seconds later, got within four, 9-13, over the next 2:02, but still trailed by eight, 13-21, heading into the second period.

The Apaches jumped out to a 6-0 advantage in the opening 2:17, but the Roughriders went on a 14-10 spree, scoring their last field goal with six seconds left, for a 2-point, 16-14, deficit heading into the second period. 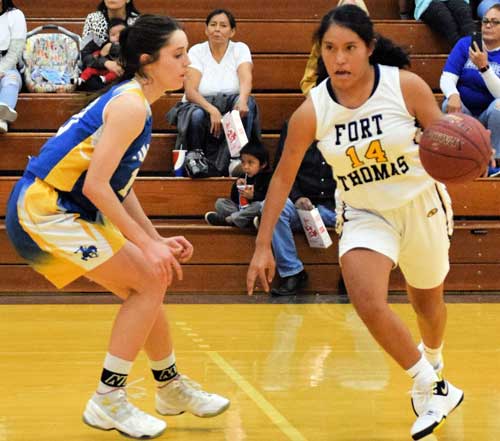 However, a second period Fort Thomas defensive scheme held Pima scoreless while fast break opportunities for uncontested layups off turnovers abounded for the Apaches en route to a 10-0 outing and a 26-14 halftime advantage.

Fort Thomas led 39-27 heading into the final eight minutes and maintained a double-digit advantage throughout the period. 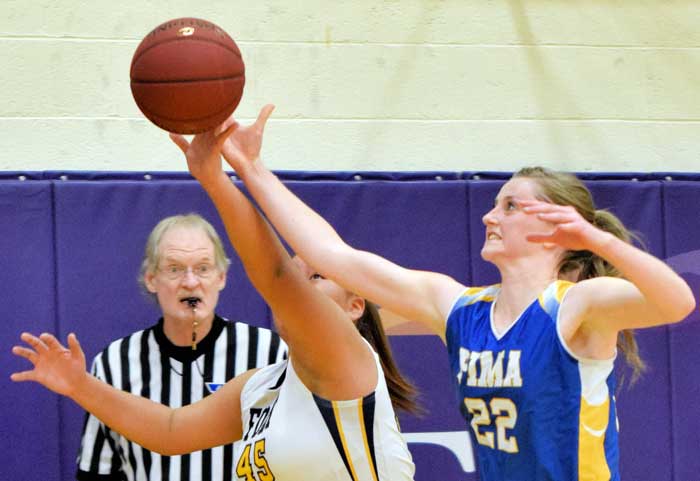 Willcox scored the initial two points 28 seconds into the game, but Cliff scored 11 unanswered points before the visiting Cowgirls added a second basket with 48 seconds left in the opening period. 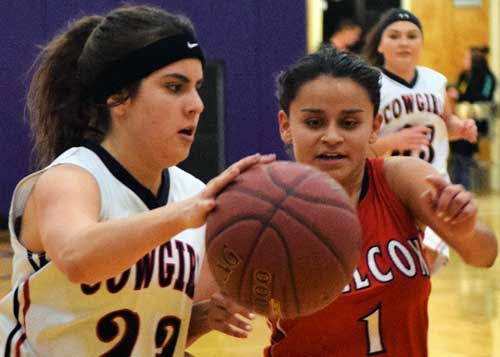 The relentless defensive pressure and up-tempo pace by the white-clad Cowgirls’ led to a 13-4 advantage to start the second period and a 13-point, 28-15, halftime margin.

Willcox scored the second period’s first basket to pare the deficit to seven, 6-13, but did not add a second basket until Cliff had a 16-point, 22-6, lead.

The Land of Enchantment Cowgirls had an 11-10 third-period outing for a 39-25 advantage to start the final period. Continued pressure and a pace maintained by reserves coupled with a 19-9 effort yielded the large margin. 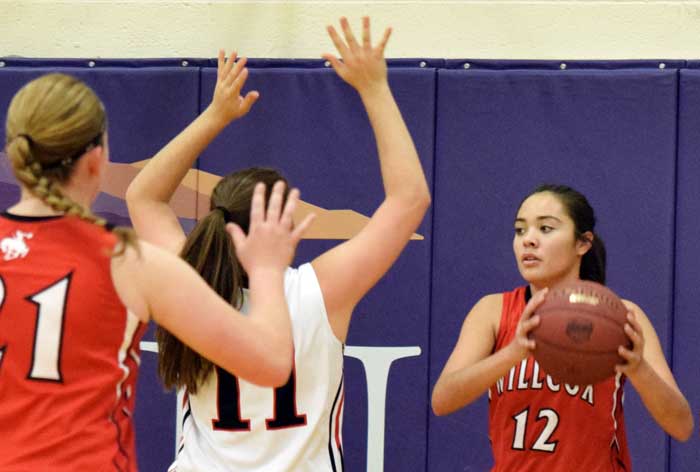 Photo By Raymundo Frasquillo: Willcox senior Danielle Barba looks for an open teammate to inbound the ball. Barba was selected to the all-tourney team a second time. 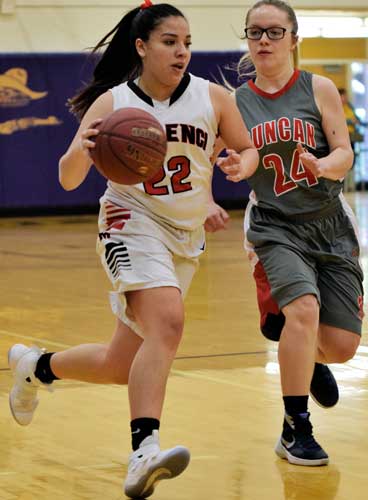 Although Duncan scored the games’ initial two points by senior Keeley Wagley, it would be the Wildkats’ sole lead of the game. Morenci countered with 1-2 free throws by senior Alex Chee and took the lead for good on senior Heather Lee’s field goal with 1:54 elapsed in the game.

Duncan senior Payton Damron got the Wildkats within two, 4-6, with 3:53 left in the opening period and it would prove to be the closest Morenci allowed during the rest of the game. The Wildcats scored 18 unanswered points for a 24-4 advantage before Duncan scored again, with 3:36 left in the second period. Morenci ended the first half with a 7-1 effort to lead 31-7.

The Greenlee County showdown in Graham County had both teams scoring 13 second-half points, but the white-clad Morenci Wildcats outscored the gray-clad Duncan Wildkats by 24 points, 31-7, in the first half to finish seventh. 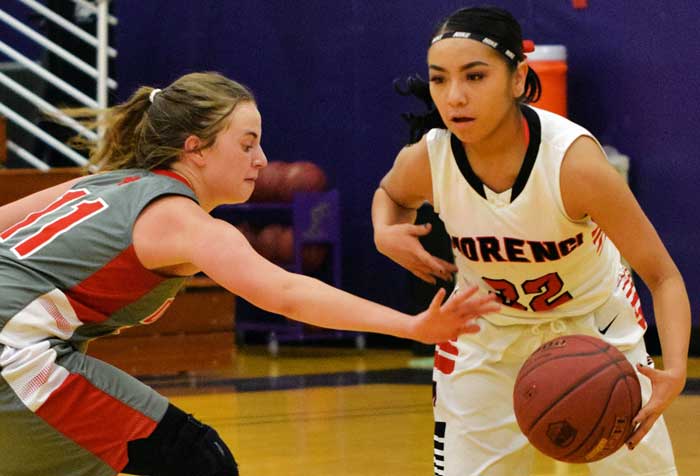 Photo By Raymundo Frasquillo: Duncan senior Keeley Wagley attempts a steal from Morenci senior Janeene Lang. Wagley totaled three points and was named to the all-tourney team while Lang had one point.

Bulldogs senior Aneesa Molina and junior Deon Abalos were tabbed co-most valuable players, the third duo in meet history. DeDawn Lovett and Lisa Reed of Duncan as well as Shila Lines and Vicky DeMuth of Thatcher were so honored in 1995 and 1997, respectively.

It was the top-seeded Bulldogs’ 24th tourney finale appearance, the 15th title, the fourth in a row, and the sixth win in 11 championship pairings with the Eagles. Safford won three straight from 1983-85 (8th-10th). 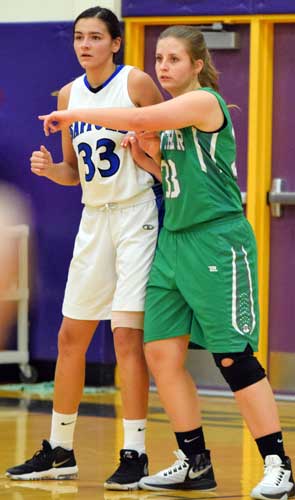 Photo By Raymundo Frasquillo: Bulldogs 6′ senior forward Aneesa Molina is defended by Thatcher senior Alyson Wakefield as she awaits a pass. All-tourney team selectee Molina had a game-high 27 points and Wakefield one.

Thatcher is 12-9 in title games but 0-5 in its most recent five qualifiers. The teams have both participated in the each of the previous 41 meets with Safford posting an 89-35 overall record and Thatcher 86-39. The Bulldogs played only two games in the 1998 meet because the seventh-place game was not held.

Beginning as a 4-team, 2-day meet with two games each day during the nation’s 1976 bicentennial year, the ensuing 41 tourneys included eight teams with four games in three days. Morenci defeated Clifton 55-42 for the title after the Wildcats topped Thatcher 56-11 and the Trojans downed Safford 29-15 on the first day. Safford ended third with a 33-21 win over Thatcher. 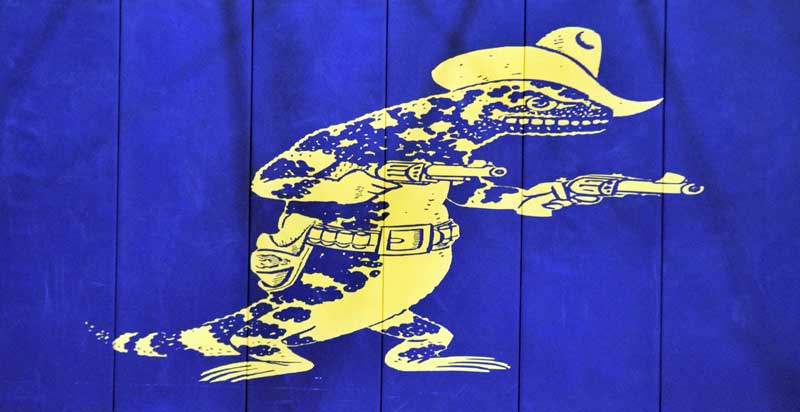