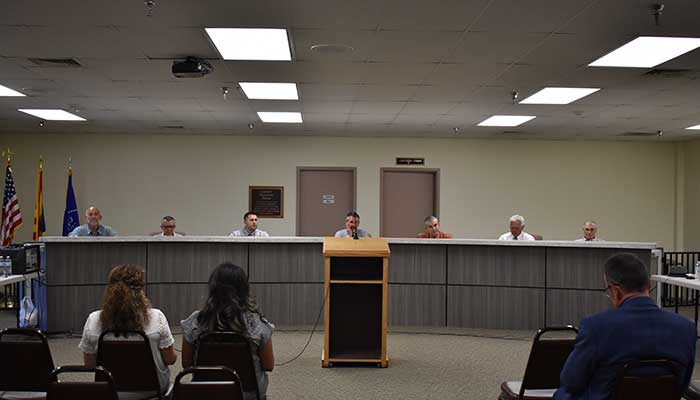 The council meeting started with a public hearing regarding the budget and tax levy for the City of Safford Fiscal Year 2018-2019. The proposed tax levy would set the primary property tax rate at $0.5135. That would amount to a property tax levy of $51.35 on home valued at $100,000. There were no comments from the public. The council will convene a regular meeting to adopt the tax levy on Monday, June 25, 2018 at 6:00 PM.

The city and county staffs have sought to find ways to jointly share similar services in order to avoid duplication and unnecessary expenses. The two contracts are examples of this cooperative effort, which reduces the overall cost to the residents of the city and county.

The council also approved funding to send a group of Safford High School students to the annual Arizona League of Cities and Towns Annual Conference Youth Program in August. City Manager, Horatio Skeete said the cost last year was approximately $500 – 600. The council approved the measure and indicated they would like the students to report to the council after the trip.

The council heard a presentation by Mark Reader of Stifel, Nicolaus & Company, who outlined a proposed debt structure for current and future debt incurred in the water division. The financing plan Reader proposed would provide funding for water infrastructure improvements. The budget for the upcoming fiscal year calls for $4.8 million of capital improvement and replacement and $20 million over the next five years. The council authorized city staff to apply for a loan through the Water Infrastructure and Finance Authority, not to exceed $5 million.

Other resolutions passed include:

The council also approved an agreement between the City of Safford and the Town of Pima for the service of fire trucks for a three year term, effective July 1, 2018 to June 30, 2021. The proposed intergovernmental agreement will allow the City of Safford to provide labor, equipment and materials to service and repair the Town of Pima’s fire trucks. Pima will pay the hourly rate for labor and the cost of parts.

The council also approved a three year agreement with Inframark for the sampling of wells and awarded the construction contract for the Church Street Water Main Upgrade Project to CNB Excavating of Dewey, Arizona.