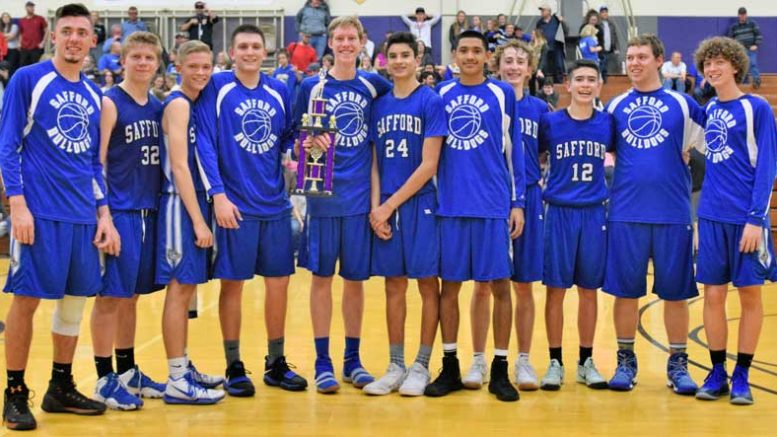 THATCHER – Third-seeded Safford had its say in the outcome of the three-day 55th annual Eastern Arizona Holiday Tourney in Guitteau Gymnasium on Dec. 20. The Bulldogs turned a 14-13 opening period edge into a 58-50 win over top seed Pima and the meet title. 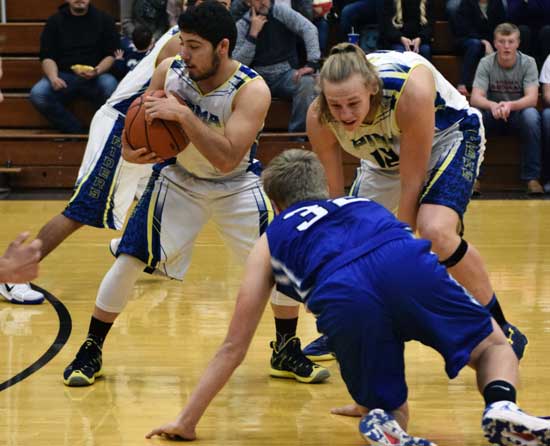 Advancing in the consolation round were Morenci and Duncan with wins of 67-35 over Willcox and 72-42 over St. David, respectively.

Points were matched within the opening two minutes for a 4-4 tie. Pima added six, two each by junior forward Dawson Pruszynski, senior guard Trey Thompson, and Pruszynski for a 10-4 advantage over the ensuing 2:53. 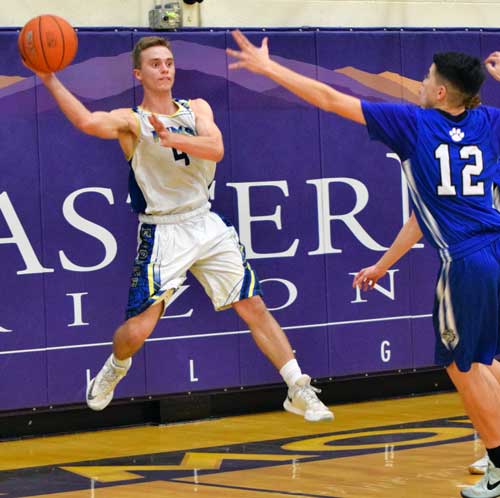 Photo By Raymundo Frasquillo: Pima senior Andrew Taylor (4) leaps up to make a pass over Safford junior Dominic Gutierrez (12) on Dec. 20. The Bulldogs turned a 14-13 opening period edge into a 58-50 win and the tourney title. Neither guard scored. Taylor was selected to the all-tourney team.

Safford went on a 7-0 run with junior forward Drew Cochran’s 3-pointer, sophomore forward Collin Thompson’s 2-2 free throws, and junior guard Andrew Smith’s field goal to get the Bulldogs’ initial lead of the game, 11-10, with 2:09 left in the period.

The teams traded 3-pointers, by Trey Thompson 28 seconds later and by Smith 22 seconds after that, giving the visiting Bulldogs a 14-13 edge after eight minutes.

Pima senior guard Frank Gutierrez drilled a 3-pointer to tie the score at 16-16 with 49 seconds elapsed in the second period. The third tie of the game was broken by a Thompson field goal 1:34 later and the Bulldogs would not relinquish the lead during the remainder of the game. 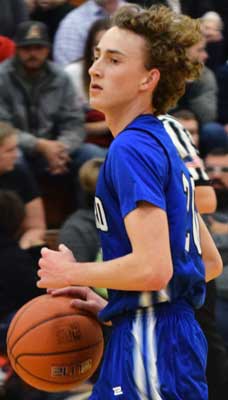 Photo By Raymundo Frasquillo: Safford junior guard Andrew Smith looks over the defense before deciding on how to attack it. He was selected all-tourney

The Roughriders got within two, 24-26, on Trey Thompson’s field goal with 4:53 left in the third period, but no closer.

Pima senior guard Manny Rivera pared the deficit to single digits 58 seconds later, 48-59, but the Roughriders ran out of time.

The Apaches doubled their third-period output, 26-13, over the Eagles to lead by 15, 51-36, heading into the final eight minutes of play. Spurts of speed, coupled with spacing and court-length passes on fast-break lay-ups resulting from rebounded Thatcher missed shots led to the large margin. Fort Thomas had a 24-23 halftime edge after leading 15-9 following the opening period. 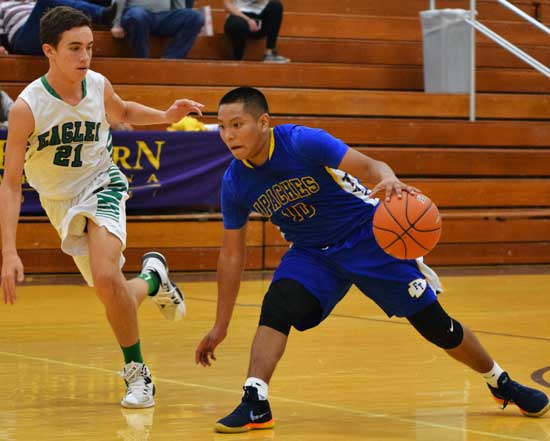 Photo By Raymundo Frasquillo: Fort Thomas sophomore guard Malachi Rogers (10) uses a jab-step and head fake to move Thatcher freshman Michael Greer (21) away from where he wanted to go. Rogers had 16 points, Greer five, in the third place game. Rogers was selected to the all-tourney team.

Thatcher mustered 21 fourth period points but needed another 12 to tie. 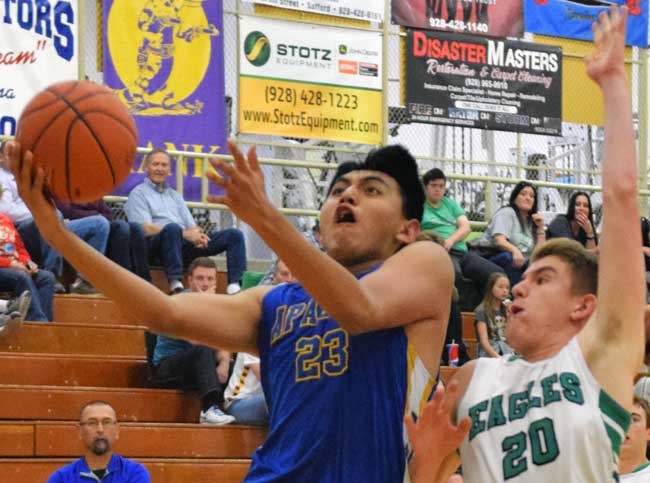 Photo By Raymundo Frasquillo: Fort Thomas senior Kobe Talgo gets past Thatcher junior Trace Goodman for a layup. The Apaches had a 26-13 third-period outing en route to finishing in third place. Talgo was named to the all-tourney team.

Two of the game’s three ties were in the 10-10 opening period showdown of Greenlee County teams in Graham County. The 3-point, 27-24, Morenci halftime margin was doubled by the start of the final eight minutes, and both teams added 11 fourth period points. 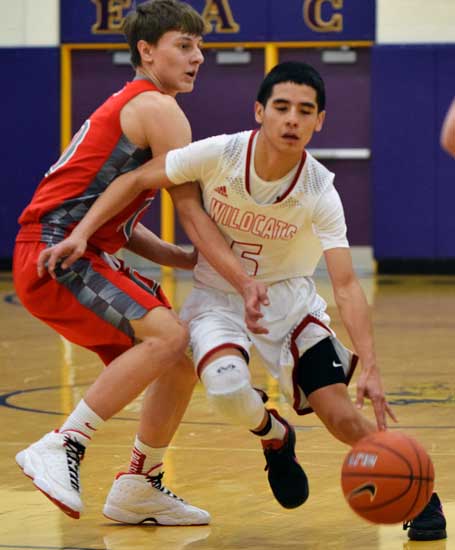 Photo By Raymundo Frasquillo: Morenci junior guard Jordan Leonard gets around Duncan junior guard Michael Lennon during the fifth-place game. Leonard tied two single meet game scoring records, the fourth player to get seven 3-pointers and the 21st to end with 28 points, and was selected to the all-tourney team. Lennon had six points.

Duncan senior forward Joseph Malinaro dialed long distance resulting in a 33-33 tie, the games’ last one, with 2:06 left in the third period. Morenci junior guard Jordan Leonard countered with a 3-pointer of his own 1:04 later plus his and-one play gave the white-clad Wildcats the lead for good. Leonard finished with a game-high 28 points on 10 field goals (two 3-pointers) plus 6-10 free throws.

Morenci sophomore forward Dominik Waters added a 3-pointer 10 seconds into the final period and freshman guard Diego Mendoza a field goal 23 seconds after that, putting the Wildcats ahead by 11 points, 44-33, within the initial minute of the fourth period.

Duncan went on an 11-6 spurt during the final 4:21, but it would not be enough as the red-clad Wildkats needed six more points to tie. 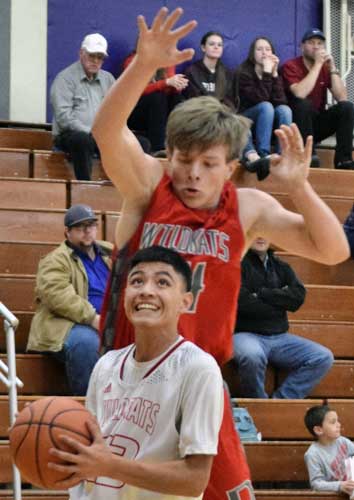 The Cochise County showdown in Graham County seemed to favor the Cowboys, with leads of 12-10 after the opening period and 26-18 at halftime.

St. David outscored Willcox 11-7 in the third period, but the Cowboys still led 33-26 heading into the final eight minutes of play. Thirteen points were added by both teams in the fourth period. 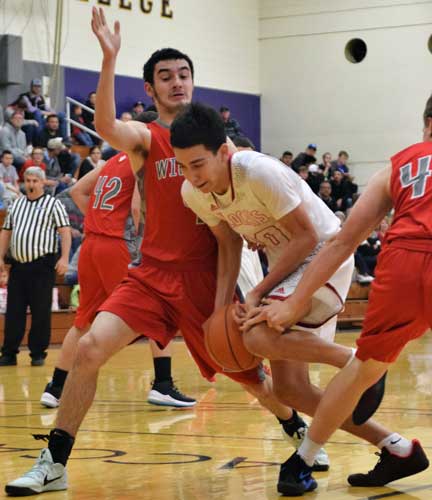 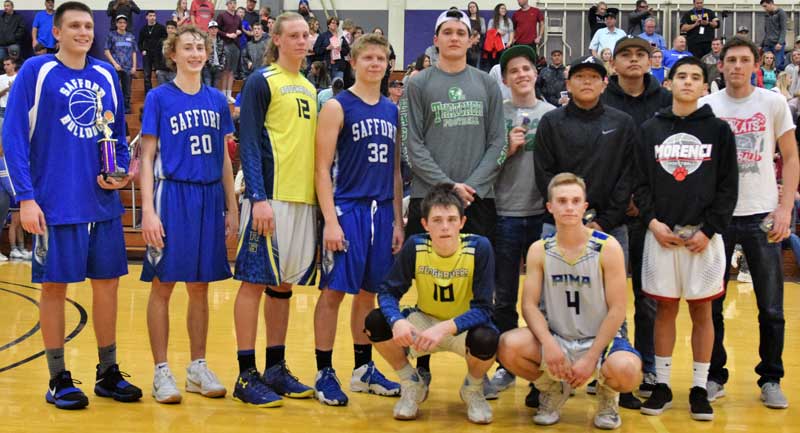 Photo By Raymundo Frasquillo: Selected to the 14-member 55th EA Holiday all-tourney team were, front, from left, Trey Thompson and Andrew Taylor of Pima; back, from left, Drew Cochran and Andrew Smith of Safford, Dawson Pruszynski of Pima, Collin Thompson of Safford, Cole Motes and Matt Palmer of Thatcher, Malachi Rogers and Kobe Talgo of Fort Thomas, Jordan Leonard of Morenci, and Braden Basteen of Duncan. Not pictured James Mayberry of St. David and Kade Norris of Willcox.

Talgo and Pruszynski were also on the 2016 all-tourney team.

It was the third-seeded Bulldogs’ 20th tourney championship game appearance, the ninth title, and the second win in three championship pairings with the Roughriders. Safford won two in a row twice, in 1984-85 (9th-10th) and in 2003-04 (41st-42nd).

It was the third straight year with the same eight teams. Pima is 8-1; Safford 7-2; Fort Thomas, Morenci, and Thatcher 5-4 apiece; and Duncan, St. David, and Willcox each 2-7 in the same three-year span. 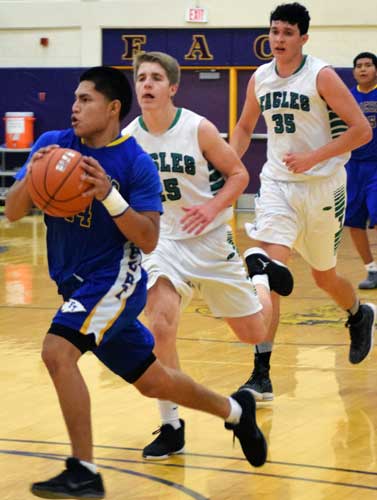 Photo By Raymundo Frasquillo: Fort Thomas sophomore Skylar Kindelay (14) looks to pass the ball as he steps into the top of the key with a pair of Eagles, juniors Matthew Palmer (25) and Cole Motes (35), on his heels. Kindelay netted 19 points, and both Eagles 15 during the third place game. Motes and Palmer were both selected to the all-tourney team.

Beginning as a six-team, two-day meet with two games on the first day and five on the second day, the ensuing 54 tourneys included eight teams with four games each in three days, unless a last-minute cancelation occurred, and one team ended with three wins, three 2-1, three 1-2, and one 0-3. Sierra Vista Buena topped Duncan 87-63 for the title, Clifton edged Fort Thomas 68-66 for third place, and Thatcher slipped past Pima 50-46 in overtime for fifth place.

Frank Campos, of Superior, has scored the single game most points, 47, during a 70-72 loss to Kearny Ray in the game 3 first round of the 4th meet and three others have scored 42 or more points.

The 28 points scored by Morenci’s Jordan Leonard in the fifth-place game with Duncan tied 20 other individual efforts for the same amount, the first by Clifton’s Karl Shade during a 68-66 third place win in the first meet and the last by Duncan’s Jason Attaway during a 65-73 semifinal loss to Thatcher in the 34th meet.

Thatcher’s Carson Goodman holds the single game most 3-pointers scored, eight in a game 2 first round 58-37 win over Fort Thomas in the 52nd meet.