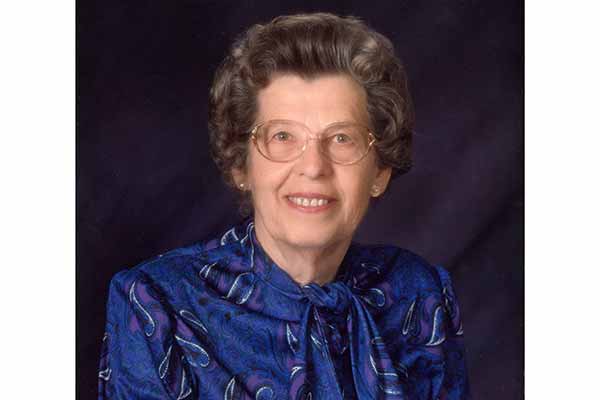 Ruth Helen Jansen Powell, a long-time resident of Safford, entered into rest early Friday morning, February 9, 2018, at the Mount Graham Regional Medical Center, surrounded in love by her family. She was 96.

Her 96 years were distinguished by her service to her community through 36 years of teaching, and over 50 years of volunteer work. Her teaching career included 4.5 years in Chicago Illinois, continuing for 2 years in Solomonville, and 30 years in the Safford school system. Ruth was a faithful volunteer for the Safford school system, the Mount Graham Regional Medical Center, and the First United Methodist Church, often taking a leadership role in which ever organization she volunteered.

Ruth received many awards for her service, among them an honorary life-time membership from AAUW, commendation for 56 years membership in American Legion Auxiliary, a charter inductee to Lake View High School’s Wall of Fame (established in 1873), Pride and Spirit of Safford, 158th Regimental Combat Unit (Bushmasters), Mount Graham Regional Medical Center Auxiliary Volunteer of the Year, and a commendation in 1999 from Arizona Governor Jane Dull for service to the State’s children.

In 2002 she was honored as the namesake of Safford’s most recently constructed school: the Ruth Powell School. It houses kindergarten through sixth grades.

Ruth was also a lifelong Chicago Cubs fan, declaring after the Cubbies had won the World Series in 2016 that “I have now seen it all, I can die now!”

Ruth is preceded in death by: her husband, Melvin, in 1999; her parents, William J. Jansen and Anna Hausske; and her sister, Eileen Jansen Hogshead.

Funeral services for Mrs. Powell will be conducted Saturday afternoon, February 17, 2018, at 1:00 p.m., at the First United Methodist Church in Safford. Concluding services will follow in the Safford Cemetery.