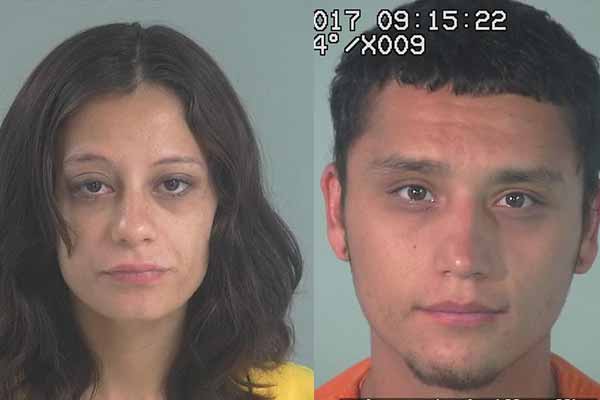 SAFFORD –  A man and woman were arrested and booked Sunday for possession of a narcotic drug and drug paraphernalia after being recognized by a police officer who stopped and asked to talk to them.

When an officer came in contact with Robert Benavidez and Lisa Maennche, heading northbound on 8th Ave., he noticed a faint odor of burnt marijuana coming from Robert’s person. The officer asked Robert if he could search him, and Robert agreed. After emptying his pockets, he had removed what was identified as a marijuana pipe. The pipe had an odor of marijuana with residue and a burnt green substance in the bowl.  The officer asked Robert if he had a valid medical marijuana card, to which he replied that he did not, but that his cousin does and that he was only holding the pipe for him.

Robert was placed in handcuffs and read his rights which he stated he understood. The officer asked him if the substance was heroin and he said yes. As the officer continued to search the back pack, he recovered a spoon with burn marks and residue consistent with drug usage, and one used hypodermic needle. A cut piece of tin foil without residue and without burn marks, which are items known to be drug paraphernalia, were also found. Robert was placed into the back seat of another officer’s patrol vehicle.

The second officer had read Lisa her rights, which she understood, and was asked if she had been using drugs. At first she denied using them but later admitted to relapsing back to heroin and being an intravenous drug user. Lisa said it had been three weeks since she had used heroin but the officer observed fresh injection marks to both of her arms. She was placed into handcuffs and into the back seat of the patrol vehicle.  Lisa and Robert were placed under arrest for possession of drug paraphernalia and possession of a narcotic drug.