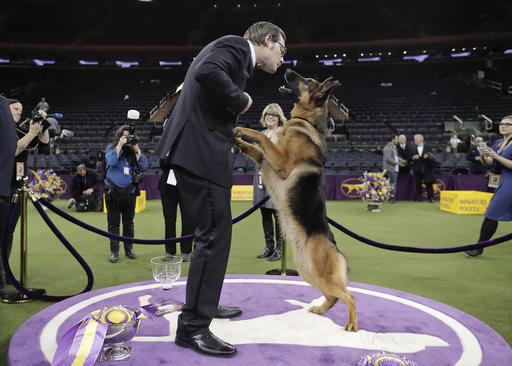 NEW YORK (AP) — Quite a rally for Rumor — a commanding comeback for German shepherds, too.

Rumor was crowned America’s top dog Tuesday night when, a year after a near miss on the very same green carpet, she came out of retirement to win best in show at the Westminster Kennel Club.

Cheered loudly all around the ring by a packed crowd at Madison Square Garden, she’s just the second German shepherd champion at the event that began in 1877.

In a year that’s seen lots of late, startling twists in sports — think Patriots, Cubs and Cavaliers — Rumor pulled something of a shocker. She’d been at home in Wisconsin for months, a house pet headed toward having puppies, when she suddenly jumped back into the show ring in January.

Boyles is a fan of the Packers and star quarterback Aaron Rodgers. Seeing a pet go from the couch to this top prize, heck, that’s a dog world Hail Mary.

The 5-year-old Rumor beat out a Norwegian elkhound, a Pekingese, a miniature poodle, an Irish setter, a boxer and a Norwich terrier in the final ring. The Irish setter called Adrian finished second. 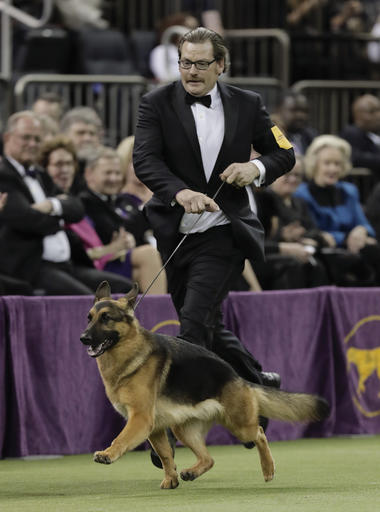 “The German shepherd standard talks about quality and nobility,” judge Thomas Bradley III said. “When you recognize it, it hits you at home, and that’s what it really is. She is just magnificent.”

Rumor is named for the hit song “Rumor Has It” by Adele, a champion herself after sweeping the major categories at the Grammy Awards on Sunday.

This was the 104th career win for Rumor, and earlier in the day, Boyles said that this would definitely, for real, be her last major show.

“She’s going to be relaxing for a while,” Boyles said after the win, but ultimately, there are “puppies in her future.”

Clearly the crowd favorite, Rumor came out flying into the best-of-seven final ring to fans whistling and calling her name.

Rumor raised up for a well-deserved treat right after the win. Moments later, as Boyles did post-show interviews, Rumor spotted him and ran toward the man who guided her to victory.

Rumor joined the fittingly named Manhattan in 1987 as the only German shepherds to go best in show at the Garden.

There were nearly 2,800 dogs entered in the 141st Westminster canine competition, spread across the 202 eligible breeds and varieties.

The moment any German shepherd steps into the ring at the Garden, the crowd goes crazy.

Some say it’s because rooting for a German shepherd is the same as putting on an NYPD or FDNY hat, standing up for a dog that stood tall at a time of the city’s greatest need.

While German shepherds hadn’t won a lot here, many of them were on the green carpet of the center ring in 2002 when Westminster honored search and rescue dogs for their tireless work at the World Trade Center and Pentagon following the Sept. 11 terrorist attacks. The solemn tribute is considered by many the most cherished memory ever at Westminster.

“They’re loyal, dependable dogs that you can count on,” Boyles said.

Rumor nearly won Westminster last year. She came to town as the nation’s No. 1 show dog with more than 100 overall ribbons but was beaten in a surprise by a German shorthaired pointer named CJ.

In fact, when the judge began to announce his champion pick with “German sh…,” Boyles took a step forward, anticipating the prize.

“I was thinking,” Boyles said.

That was supposed to be Rumor’s last show, and she was set to head home with Boyles to Edgerton, Wisconsin, to be a house pet and have puppies. She didn’t conceive and late in the year, Boyles thought twice about Rumor’s retirement.

“She liked to show and was in good shape, so we thought, why not?” he said.

Rumor went back on the circuit in January for 10 shows. She won the herding group Monday night at the Garden, beating top show favorite Preston the puli.

She topped that with the ultimate win at America’s most prestigious dog show, rewarding the faith German shepherd fans always show in them.

“It’s a recognizable dog, people have liked them for a long, long time,” WKC President Sean McCarthy said earlier. “I think it goes back to Rin Tin Tin.”