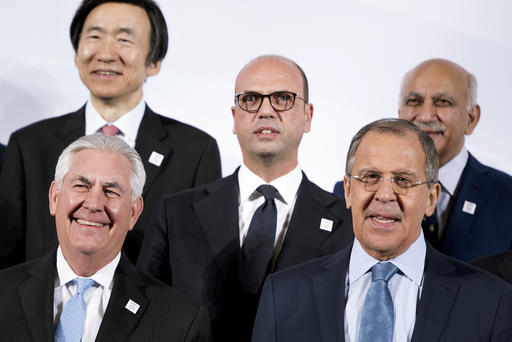 BONN, Germany (AP) — Envoys from leading global powers called Thursday for greater cooperation to tackle current conflicts and prevent future crises, pushing back against the isolationist tendencies that some diplomats fear could flourish with the new U.S. administration.

Speaking after a meeting of top diplomats from the 20 largest industrialized and emerging economies, Germany’s foreign minister said no single country could solve issues such as climate change, terrorism and mass migration alone.

“It can only be done with cooperation and openness, not by withdrawing into one’s national shell or circling the wagons,” Foreign Minister Sigmar Gabriel told reporters in Bonn, Germany.

Gabriel said all delegations that spoke Thursday backed a call from U.N. Secretary-General Antonio Guterres to support multilateral diplomacy. He declined to say whether the U.S. delegation spoke.

Gabriel, who is hosting two days of talks among the so-called Group of 20, also rebuffed demands for Germany to sharply hike its defense budget. Europe’s economic powerhouse does more for security than many other nations by supporting refugees and investing in international development, he argued.

The Trump administration is leaning heavily on its allies in Europe to raise their defense budget to NATO’s target of 2 percent of GDP, a move that would cost Germany up to 25 billion euros ($27 billion) more each year.

Gabriel said the U.S. was right to ask allies to share more of the defense burden. But he noted that Germany had taken in vast numbers of Syrians, Iraqis and Afghans fleeing conflicts in their home countries in recent years, resulting in costs of “30 to 40 billion (euros) last year for almost a million refugees, who by the way are the product of misguided military interventions around the world.”

Officially, the talks in Bonn were focused on the 17 so-called sustainable development goals that the international community agreed to aim for by 2030. Recognizing and preventing future crises, as well as support for Africa, were also on the agenda.

In practice, the meeting was an opportunity for many foreign ministers, including those of Saudi Arabia, Britain and Russia, to hold their first face-to-face talks with recently confirmed U.S. Secretary of State Rex Tillerson.

Diplomats acknowledged that governments back home are thirsting to learn what President Donald Trump’s stated goal of putting “America first” will mean in practice, and what kind of grasp the new administration in Washington has of foreign policy.

France’s foreign minister, Jean-Marc Ayrault, said he left a meeting with Tillerson “preoccupied” by the U.S. stance on the Mideast conflict. Ayrault said Tillerson suggested there might be another solution besides two separate states for Israelis and Palestinians — long the international consensus.

On the nuclear deal with Iran, Ayrault told reporters he felt “a point of divergence” after Tillerson said the U.S. would review the agreement “from scratch.”

With trans-Atlantic ties in doubt, some in Europe are casting their eyes elsewhere in search of allies. Gabriel indicated that Germany was keen to improve its sometimes tense relations with Russia and China.

Still, Gabriel echoed the U.S. stance on Ukraine by insisting that Moscow lean on pro-Russia separatists in eastern Ukraine to pull back their heavy weapons from the front line.

The foreign ministers of Russia, Ukraine, France and Germany plan to discuss the conflict in eastern Ukraine at length Saturday at the Munich Security Conference.

Tillerson and Gabriel were scheduled to meet later Thursday, after a banquet dinner that diplomats said was expected to see a “frank and open” discussion about current world crises.

Outside the venue, campaigners from the environmental group Greenpeace unfurled banners with the words “Planet Earth First” from a boat on the Rhine River and a nearby high-rise to protest against climate change.