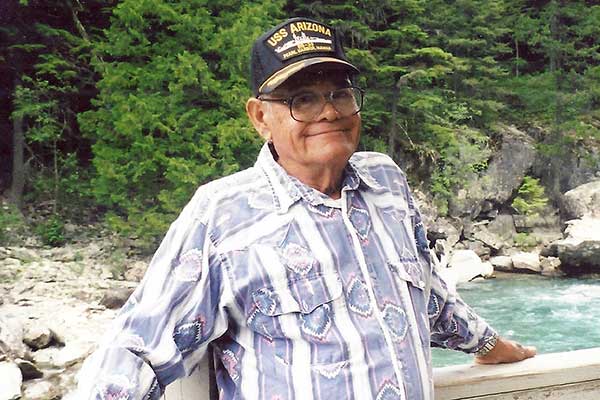 Rodolfo T. Lopez, of York Valley, passed into eternity on May 28, 2019 in Tucson at the Veteran’s Hospital at the age of 88.  He was born December 1, 1930 in Clifton, AZ to Julian & Manuela Trillo Lopez with siblings Carmen, Marie, Ermenia, Manuel, Cecilia, Julian, Dora, Edward and Joe.

He attended schools in Clifton until he entered the United States Army in 1948.  Rodolfo was honorably discharged in 1952, holding the rank of Corporal. He married his first wife Guadelupe and together they had 6 children. He began working for the Phelps Dodge Mine where he spent many years working as a haul truck driver and supporting his family before retiring. After years of Guadelupes’ passing, he married Joanie in 1995 in Duncan, AZ.  The couple joined their families together making a total of 13 children; Richard, Paul, Rebecca, Robert, Mary Helen, Elaine, John, Jeff, Bill, Teresa, Angie, Richie and Debra.

Rodolfo loved the outdoors, gardening and camping and truly loved all grand/great babies.  He was known for his stories but was also a very reserved person, keeping to himself most of the time. Rodolfo loved animals and had many pets over the years.  He was very devoted to his Catholic religion by being a CCD teacher and Crusistas.

A viewing will be held on Tuesday, June 4, 2019 at 9:00, followed by the Recitation of the Rosary at 10:00 and the Mass of Christian Burial at 11:00 a.m. being held at the St. Mary’s Parish in Duncan, AZ.  Interment will be in the Duncan Cemetery following services.