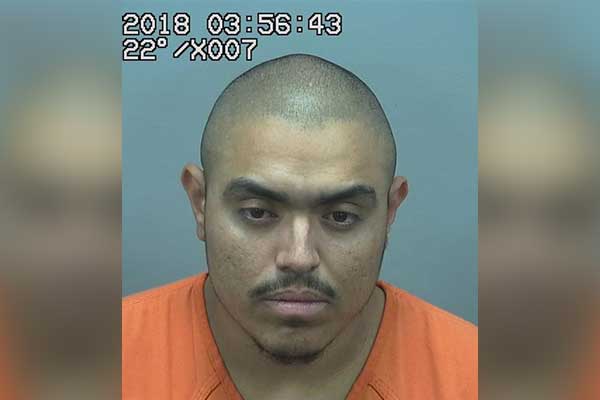 Safford – A man pulled over for failing to dim his lights ended up in jail on a weapons charge and for driving on a suspended license.

On Tuesday morning, just before 1:00 AM a Safford police officer conducted a routine traffic stop involving a driver who failed to dim his lights for oncoming traffic. The officer noted that all four front headlights were activated as well as two after market lights which were mounted on a push bumper. When the officer told the driver of the vehicle, Ruben Regalado, the reason for the stop, he apologized and deactivated the bright lights. The officer noted there was a female passenger in the car.

The officer obtained Regalado’s license, ran a check for wants/warrants and driving status, and found that Regalado had a non-extraditable warrant for his arrest out of Eloy, and that his license had been suspended. The officer also learned that Regalado had recent police involvement and had been charged with resisting arrest.

The officer approached Regalado’s vehicle and advised him that his license had been suspended. Regalado asked why, and the officer asked him if he had had a prior DUI offense. Regalado responded that he was not aware of any but did admit to having police contact ‘the other day.’

The officer had Regalado exit the vehicle and conducted a pat search for weapons before handcuffing him. The officer advised him that he was being detained for driving on a suspended license. He asked Regalado the name of the female passenger but he refused to answer. Regalado did, however, say that the vehicle belonged to his father. Regalado was secured in the police cruiser while the officer continued his investigation.

During the inventory, the officer noticed that the door instrument panels had heavy tool marks on them and appeared to have been removed excessively. The officer pulled up on the passenger side door panel which came up easily. The officer noted that there appeared to be fresh fingerprints inside the panel. The driver’s side instrument panel also came off easily and had fingerprints inside. The officer also noted that the stereo appeared to an aftermarket brand and also had heavy tool marks. The stereo had been installed in the original molding but the top molding was missing. The officer also found a hand sized portion of a plastic baggie which was melted on one side.

Because of the suspicious items in the vehicle and the heavy tool marks, the officer looked under the hood for further aftermarket stereo components to add to the inventory list. The officer noticed fresh fingerprints on the air filter cover. When he opened the filter compartment he found a semi-automatic pistol wrapped in a white cotton glove. Another hand sized plastic baggie was found in the engine compartment, however this baggie had a white residue on it.

After the discovery of the handgun, the female passenger was advised of her rights and questioned about the gun. She denied any knowledge of it, nor any knowledge of any kind of drugs or paraphernalia. After a search of her person in which no illegal items were found, she was released from the scene and left on foot.

Regalado refused to speak to officers and became silent. He didn’t even answer if he understood his rights when they were read to him.

While waiting for the tow truck to arrive the officer requested dispatch to conduct a criminal history search on Regalado. The search revealed that Regalado had been to prison and was a prohibited possessor of firearms.

Regalado was transported to the Graham County Jail and booked on weapons misconduct and driving on a suspended license.