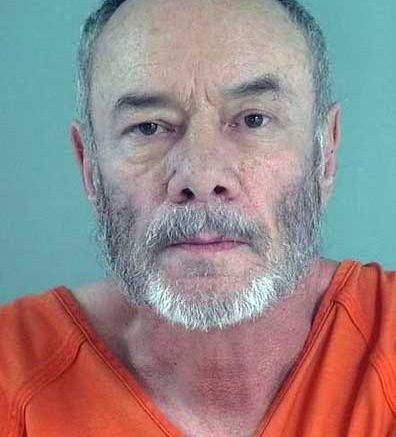 Contributed Photo/Courtesy GCSO: Serial exhibitionist Jerry Roesberry was booked into the jail on a charge of indecent exposure. He was busted three times in 2015 for the same thing.

SAFFORD – After making it through 2016 without any incidents, serial exhibitionist Jerry Roesberry, 61, is apparently back at it again, having been charged with indecent exposure.

Roesberry was arrested and booked into the Graham County Jail April 20 after an employee at the White Elephant Thrift Shop at 507 S. 5th Ave. complained that she witnessed Roesberry pleasuring himself in the store.

Roesberry has a long history with indecent exposure and was convicted of the crime in 2002 and 2010. During 2015, Roesberry went on a spree where he was arrested three times in six months for indecent exposure, including exposing and pleasuring himself at Candy’s Ice Cream Shop at 428 Main St. in April, 2016; exposing himself in the candy and shaving cream aisles of Dollar General at 740 W. Roper Lake Rd. south of Safford in July 2016 and exposing himself in October 2016 to a 17-year-old victim, who reportedly said she saw Roesberry on his porch wearing only a white T-shirt fondle himself while she got into her car and left.

Officers were dispatched to the White Elephant Thrift Shop at about 12:01 p.m. regarding the latest incident. Upon arrival, the clerk described Roesberry and said he had frequented the shop for the last three years and that his presence “creeps her out” because he would just stand behind the clothes racks and stare at her.

Officers caught up to Roesberry at the Giant Gas station at 8th Street and 8th Avenue and questioned about what happened at the store.

Roesberry initially told a tale of the clerk coming on to him in a sexual way and then alluded to having a sexual problem and that he was having trouble getting help for it. Although he admitted to having a problem, he denied exposing himself to the clerk.

Roesberry was then arrested and booked into the jail for felony indecent exposure and his car was towed from the gas station by Nutcracker Towing.

According to Arizona Revised Statute 13-1402, indecent exposure to a person who is 15 or older is a Class-1 misdemeanor, except if a defendant has two or more prior convictions for the same violation, then it is a Class-6 felony. A person who is convicted of a felony indecent exposure violation and who has two or more historical prior felony convictions of the same violation can be sentenced to a mitigated term of six years in prison, with the presumptive sentence being 10 years and the aggravated sentence 15 years.