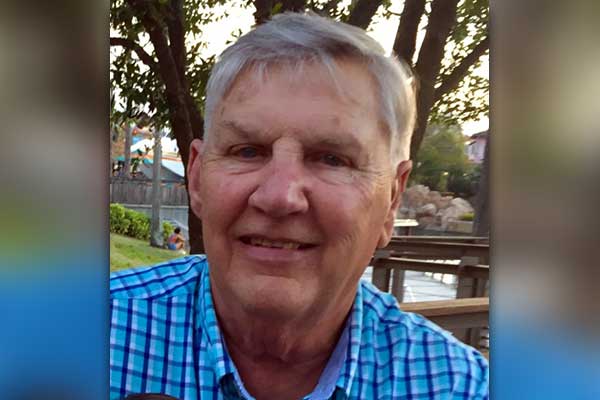 After graduating high school, he served his country in the U.S. Army and was honorably discharged then went on to attend New Mexico State University where he earned his Bachelor’s degree and began working as an Insurance Agent.  He always wanted to be an Astronaut, but he was too tall.

Tom was a devoted Catholic and member of the St. Rose of Lima Catholic Church. He was also a member of the Knights of Columbus. Tom married Dr. Susan Jones in Safford on July 29, 2000,  bringing their families together with children and step-children; Veronica Renteria Dorrell, Nick Renteria, Andrew Tharp, and Thomas Tharp.

He loved his family, going to church, the Gila Valley Clinic, watching sporting events, especially EAC, and enjoyed cooking and barbequing.  Tom always cooked enough for an army. He also loved making popcorn balls for the Festival of Tree. Tom would feed all the animals in the neighborhood, would give the shirt off his back and would help anyone in need.

Tom’s favorite saying were; “Sometimes you have to do things in life you don’t want to do”, “What’s going on”, and “How’s your food, can I try some?”.  He recently wrote a note to his wife Susan that said, “Always move forward”. He was so loving, caring, and forgiving.

He was preceded in death by his parents Dr. Leslie & Alice Hamm and his sister Leslie Maddox.

Private family services will be on Monday, April 13, 2020, at 1:00 p.m.  Services will be webcast on Facebook Live, at McDougal’s Caldwell Funeral Chapel Facebook page, like the page and watch it live or recorded later.

Families suggest donations be made in Tom’s name to St. Vincent De Paul, or Our Neighbors Pantry.