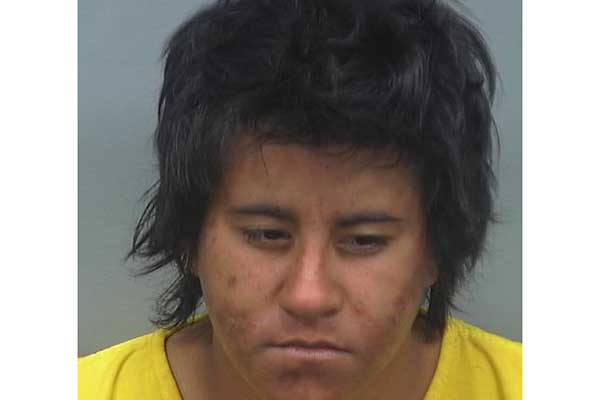 SAFFORD – On Wednesday, February 21st, Safford police officers responded quickly to the area of Chase Bank in response to a reported robbery. As an officer was headed to the scene, they were informed that a male, wearing a white t-shirt and baseball hat on a bike came by and took a women’s bank bag as she was headed to Chase Bank. A second witness said they had followed the person and was on Central Ave just south of the railroad tracks. The suspect appeared to be a native American male wearing a blue ski mask. The reporting party said they lost the suspect after they crossed the tracks.

Investigators searched up and down the streets and learned that the suspect had ditched the bike by the railroad tracks on Central Ave. The officer saw a Hispanic male wearing a light-colored shirt walking south on Central Ave. When the officer called to the man, he ran into a residence. After officers were able to get the man to come outside, the second witness came to identify and said that he was not the person involved in the robbery.

The officers continued the search, also learning that the white shirt and hat had been ditched with the bike. An officer went to speak with the victim who stated that she was standing on the corner of Central Ave. and Main St. waiting to cross the street. She said she had a bank bag in her right hand and was headed to Chase Bank to make a deposit. She said she saw a friend across the street and lifted her hand with the bank bag to waive. When she did, a person on a bike rode past her, grabbing the bank bag out of her hand. She said the person was riding eastbound until reaching 3rd Avenue and then turned south on 3rd Avenue. She started walking toward that direction and saw the person riding through the Thriftee parking lot and then lost sight of them.  As the officer was speaking with the victim, they were informed that a second officer was speaking with Tonya Reed on the corner of 2nd Avenue and 15th Street. The second officer noticed that Reed appeared to be dirty and had mud on her shoes and shorts. The officer asked her where she was coming from and she told him from she was coming from where she works.  The police report noted that from prior police contact, Reed is known to dress like a male. The officer asked the victim if she would be willing to drive with them to see if Reed was the suspect, and the victim said she would.

When the victim saw Reed wearing a black tank top and long baggie shorts, she said that the build appeared to be the same and she was 80% sure that she was the suspect, however, they were not dressed the same. When the officer asked the victim to picture Reed in a white shirt and hat, she then told the officer she was 100% sure that it was the suspect. The victim was given a ride back to her work.

After the first officer had finished speaking with the 2nd witness, they heard over the radio that the bank bag had been found in the canal on 3rd Avenue.  The total amount of cash and checks stolen from the bank bag was $1128.98. The bank bag had contained $97 in cash. Investigators acquired video of the area around Thriftee and identified Reed riding the bicycle they found by the canal and wearing the hat, clothing and sunglasses that were ditched with the bike.

Reed was handcuffed and advised she was under arrest. Officers asked her to cooperate and help them recover the property she took. Reed reportedly told investigators that she didn’t know what they were talking about and said, “I plead the fifth.” Officers searched Reed and found $97 in her back pocket – the same amount of money that was reportedly in the bank bag. Reed claimed the money was hers from a job she has sweeping after hours for which she gets paid $10 per day.

She was transported to the Safford Police Station where she was interviewd by investigators. During the interview, Reed apparently acknowledged that she had gone to Thriftee to redeem a lottery ticket she thought she had won. She was upset when she found out the ticket wasn’t a winner. According to the police report she admitted to riding the bike and wearing the clothing witnesses saw the robbery suspect wearing. She reportedly admitted that she took the bank bag, then hid under a bridge over the canal. She took the money out of the bag and left everything by the canal where investigators found it. After her interview, Reed was booked into the county jail.