Photo By Raymundo Frasquillo: Clifton resident Jesleena Casill gets a ride for the event as she serves as the Hill Climb Queen.

CLIFTON – It was the sound of raw power from beginning to end, from the starting line to the finish line at the 2017 Clifton Hill Climb held Sept. 30 and Oct. 1. 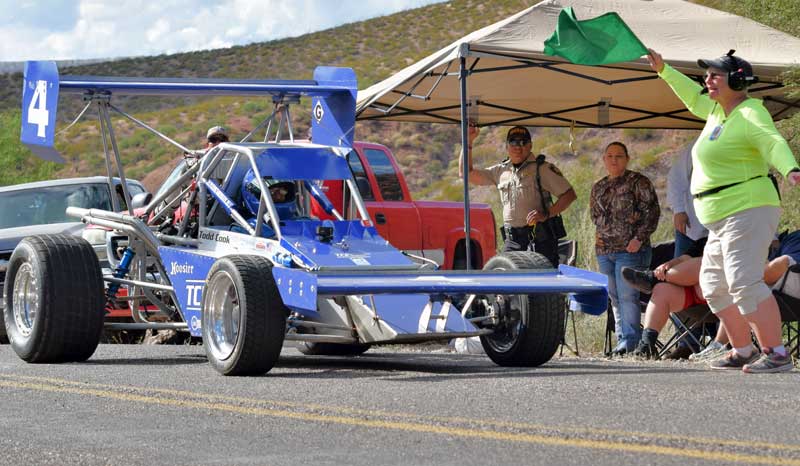 The sound was not the kind that makes people cover their ears. In fact, as racers revved up their engines at the starting line spectators sitting in bleachers most often leaned forward in excitement or anticipation when drivers revved up their cars. 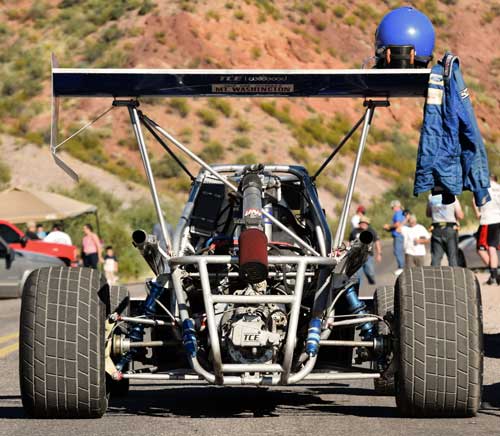 Photo By Raymundo Frasquillo: A driver leaves his equipment on his car as he allows a cool down before racing again.

Some spectators said they felt a rush of adrenaline when the green flag was waved as the go-ahead signal for each car that takes off with a mighty roar.

The sound of the powerful engines echoed through narrow Ward’s Canyon Road as drivers negotiated the many hairpin turns. Fortunately there no crashes, although one car did have to be brought down on a flatbed tow truck.

Because of the road’s narrowness, only one car at a time raced.  A total of 21 cars registered for the event. Most of the action occurred on Saturday, which weather wise proved to be a quite pleasant day for the drivers, their crews, and spectators. Then again, it was still a challenge for drivers who wore thick insulated fire resistant clothing along with heavy helmets. 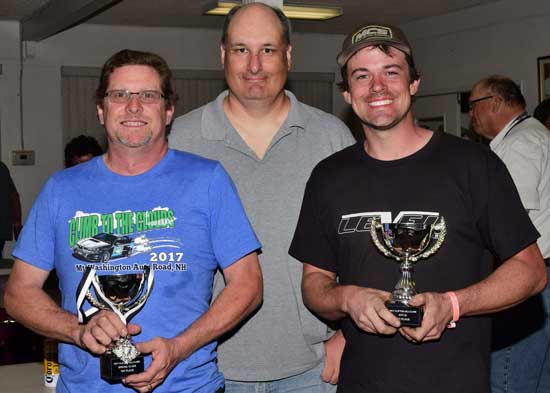 The event was the Esther Tavison Memorial Hill Climb. It honored the late Hill Climb enthusiast who in the past two Hill Climbs devoted a great deal of time and energy to organizing the event. Her father, Julio Tavison attended the Sunday night awards dinner. He is a highly respected member of the Clifton community having served on the Clifton Town Council and was involved in many positive efforts for the betterment of the town. The dinner was held at the Sacred Heart Parish Center. A dinner was held Friday night at the Blue Door Sanctuary and on Saturday night at the Post 28 Amercian Legion Hall. 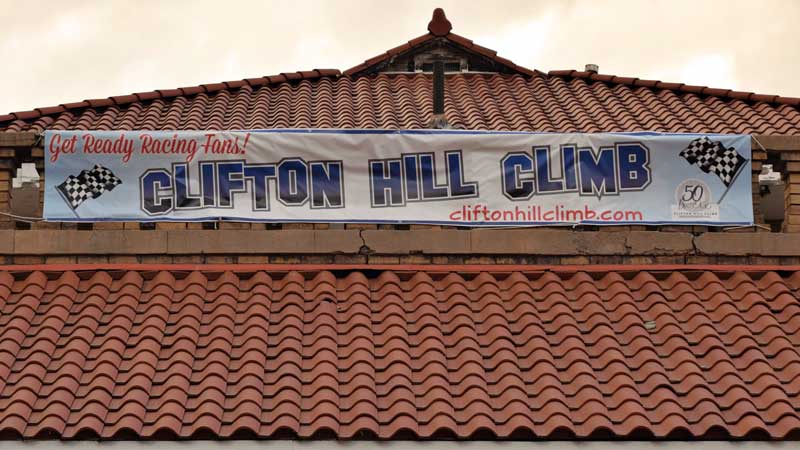 Locals were treated to a close-up view of many race cars during and immediately after a parade on historic Chase Creek Street Saturday night. Several parents guided their small children to the cars parked on the Chase Creek parking lot.

“That was really neat,” Clifton Town Manager Ian McGaughey said. “Not only for the kids but also their parents to be able to see and actually touch those powerful machines.You might say that for many of the youngsters it may have been the thrill of a lifetime. Something they’ll never forget.” He noted that racers were very welcoming to children and adults as they explained functions and certain aspects of their cars, such as spoilers on the rear end of the vehicles.

Photo By Raymundo Frasquillo: Glendale driver Rocco Bocchicchio nears the finish line during one of his runs up Ward Canyon.

All cars ran on Saturday. Some made the cut to qualify for Sunday’s final round. There was talk among some of the drivers and their crews about how to clip off a few seconds more on their respective runs up the hill.Some racers were able to do so and wore big smiles as they returned to the finish line, stopped, took off their helmets and emerged from their cars. Yes, many of them would be racing in Sunday’s final round. 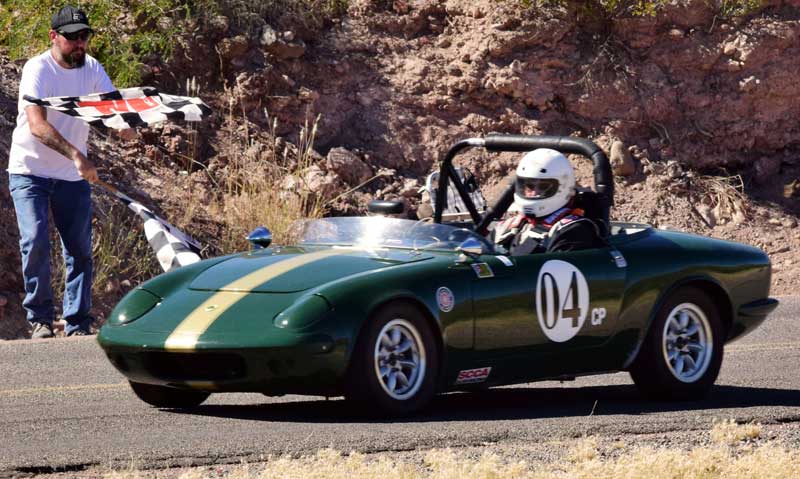 Photo By Raymundo Frasquillo: Car No. 4 was first in the Vintage Class.

It was not to be for Spencer Steele of Denver, Colo., in his bright yellow Wells Coyote, which developed a mechanical problem that could not be overcome. Earlier, crew member Ed Smith pointed the number 43 on the Coyote. He said Steele was 43 years old when he started racing and his wish is that the number would bring him luck. Steele’s was one of many interesting personal stories of racers and the backgrounds of their respective cars.

Photo By Raymundo Frasquillo: Car No. 8 was first in the Rally Class.

When there were breaks in the action racers and their crews for whom it was their first time running in the Hill Climb commented on the beauty of the setting. To the immediate left of the starting line is a tall wall of red rock. The distant hills and peaks of the Petahaya Mountains looked almost surreal with their different colors, from red to green where creosote bushes and mesquite trees grow to the purple- and blue-colored Petahayas off in the distance. The big, white puffy clouds that floated overhead during most of the day often affected changes in the color of the scenery.

Photo By Raymundo Frasquillo: The former site of the Clifton Public Library was used as the hill climb pit area.

It was the third and final year of the Hill Climb being sanctioned by the Sports Car Club of America’s Arizona chapter. The SCCA had agreed to sanction the Hill Climb for three years.Whether there will be a fourth year remains to be seen. One important factor will undoubtedly be sponsorship. That is something that SCCA Regional Director Chris Page said is already being considered. 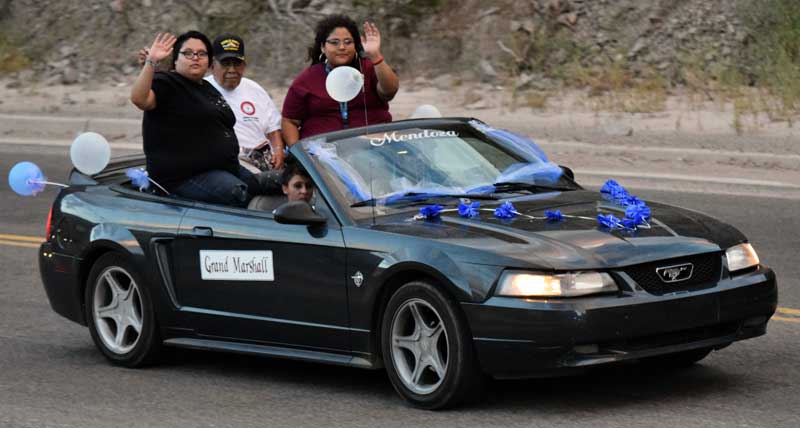 Local officials had hoped the Hill Climb would bring more spectators than the event drew. A woman who had attended the SalsaFest at Safford in neighboring Graham County said that event may have been a big reason more people were not at the Hill Climb. She noted that she saw several people from Greenlee County, of which Clifton is the county seat, who attended the festival.