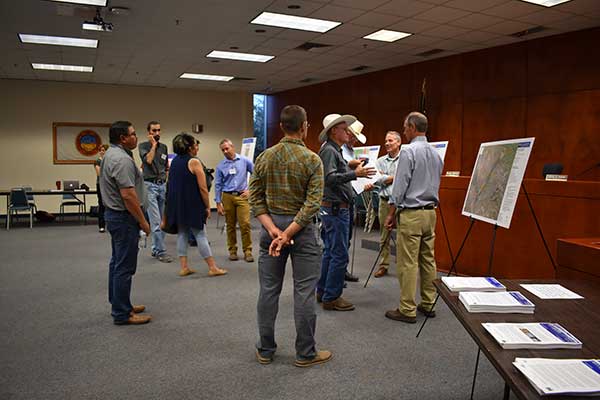 A public scoping meeting for a proposed Gila River water diversion project in New Mexico, was held on Friday, July 13, 2018 at the Graham County General Services Building. Representatives from the New Mexico Unit of the Central Arizona Project, and Bureau of Reclamation were on hand to discuss the project and answer questions.

The Arizona Water Settlement Act (AWSA) of 2004 ratified the Consumptive Use and Forbearance Agreement (CUFA), signed by Gila River users downstream of New Mexico. The Agreement details the conditions that must be met for New Mexico to be able to divert water from the Gila River and its tributaries in New Mexico, including the San Francisco River. The Colorado River Basin Project Act of 1968 as amended by the AWSA requires that CAP water be delivered to some downstream users in Arizona in exchange for consumptive use in New Mexico.

Basically, that means that the water taken for the project cannot cut into the water allocated to farmers in the Gila Valley. Water levels at the San Carlos Reservoir must be at least 30,000 acre-feet of storage before water is diverted in New Mexico. The CUFA sets the parameters by which they can take water for the proposed diversion structures. During the winter months, for example, the project could take water and store it in holding facilities for agriculture use in the summer. The downstream demand has been takien into consideration and models have been constructed to determine the demand and when there is water available for storage.

Currently the project is in the environmental impact study phase. The study should be completed by late 2018 or early 2019 and public comment will be sought again.

Public comment on the project can be made until July 20, 2018. For more information on the project and to submit comment, visit http://nmuniteis.com.