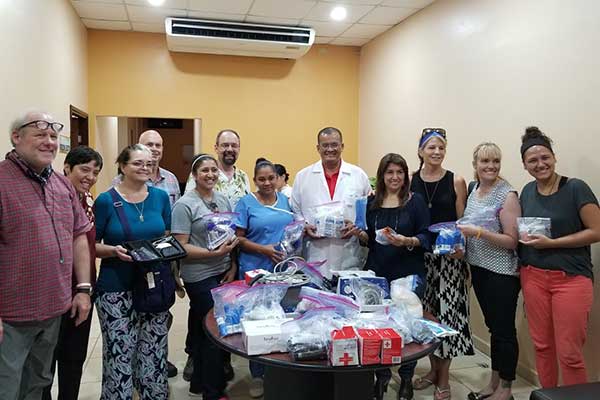 A group of healthcare professionals recently spent a week in Honduras providing medical services and training to people in the town of Nacaome.

Gila Valley Medical Projects is a local group of volunteer healthcare professionals that has been taking yearly trips to Nacaome, Honduras since 2009. The annual trip is scheduled for the last week of June and costs each participant about $1500.

Shelley Vaughn is the project coordinator. Vaughn and her husband Jeff started going to Honduras in 2006 with Pam Burwell. Burwell first went to Honduras in 2001 because of Hurricane Mitch, which was the second deadliest Atlantic hurricane on record, causing over 7,000 fatalities in Honduras.

Jeff Vaughn met Burwell in Morenci, where he served as the Emergency Medical Services Manager for about 20 years. Burwell was working there as a temporary Physicians Assistant. When Shelley graduated nursing school in 2005, Burwell invited her and Jeff to go to Honduras. The Vaughns took their first trip in January of 2006. They provided healthcare services in Danli, a city located about 56 miles southeast of Tegucigalpa.

In 2008 Burwell asked the Vaughns if they would take over the annual project because she was busy working on other projects in Nigeria, Cambodia and Haiti. In May of that year the Vaughns took an exploratory trip to Honduras and met with Brenda Puerto Mejia, a school teacher (and now vice-mayor) in Nacaome. The city of 58,000 people is about two hours southeast of the capital city of Tegucigalpa.

Mejia’s father was a carpenter and built the family home one room at a time. Now it has about ten rooms with a courtyard in the middle. Mejia and her husband have three children. The oldest, Daniela was in medical school. The middle child was in college studying law and the youngest was in high school. Mejia and her husband welcomed the idea of the medical team coming to their community. Jeff and Shelley Vaughn took their first trip as project coordinators in January of 2009 with Dr. Lynn Smith serving as their medical director.

The Mejia family arranges all of the transportation for the group and the group stays with the Mejia family. There is no running water, so the group takes “bucket” baths. The toilets have to be flushed with a bucket of water.

Originally the group spent two weeks in Honduras and they stayed at the local health clinic. They saw about 200 patients a day. The community in general was not in good health due to poor hygiene and poor living conditions. The group takes all of their own medications which they purchase. During the first few years the group ran out of pain medication by the second week. But now they have a better supply and are able to give their Honduran patients a thirty-day supply of ibuprofen or Tylenol. 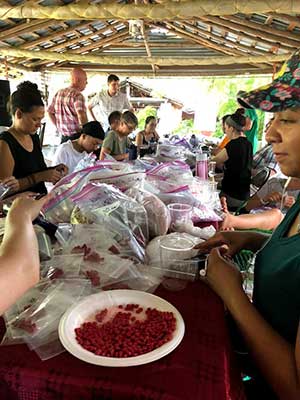 The team takes approximately $4,000 of medications with them. They have developed a formula to determine how much medication to take based on the health needs. Randy Bryce, Mount Graham Regional Medical Center, had been the volunteer pharmacist and ensures that the group’s medications are ordered correctly each year and that the groups has what they need.

During the first several years the group wasn’t able to raise enough money to pay for the meds, so they covered the cost themselves. As volunteers, the group also pays for their own airline tickets, and pays the host family.  For the first several years, each volunteer would pay $400 to buy the medications. Now that they’re better known in Graham County they hold a dinner every March that generally raises enough money to pay for the medication. EAC nursing faculty members, Amy Ollerton and Sara Lemley are both instrumental with the annual dinner fundraiser and nursing student participation.

When the group arrives, they divide up into two teams. The physicians and nurse practitioners see patients, while the nurses, students and other volunteers run the pharmacy and provide health training. This year, naturopathic physician, Sara Polanco, also provided acupuncture.

Dr. Gail Guerrero served as the medical director. In addition to Dr. Guerrero, there were four other providers as well as nurse practitioners, nurses, students, a dentist and dental hygienist, and other volunteers:

Dr. Eric Curtis, a dentist in Safford, went as an interpreter and provided training.

Since 2015 when their group started taking nursing students, they dropped from two weeks to one week. It was becoming difficult to get providers to spend two weeks because of the time it required them to be away from their practices. They also moved the trip from January to June. The summer schedule accommodated both physicians and nursing students. Doctors were reluctant to leave their practices in January because of flu season and nursing student were out of school in the summer so moving the trip to June accommodated both situations.

Now the group goes the last week of June and spends a week. This year the group saw 1,377 patients. This year they also found that the town of Nacaome is a lot healthier. Vaughn says the improvement is not necessarily due to her group, but every year they go they fill out a health department form for the local clinic and they chart down the number of patients they see. The clinic is able to turn that in and show the Department of Health how many people need help.

Now there are more local doctors to provide healthcare for the community. The clinic sees about 300 patients per day, but they have about 10 providers now. That’s something they didn’t have when the group started going there in 2009.

In 2015, when they cut down the trip to one week, they made arrangements with the local Red Cross to take half the team to away clinics in rural areas. Vaughn says they found that people in these areas are still very sick. Next year the team may only spend one day in Nacaome. The rest of the time they’ll divide up and visit rural areas.

Andrew Bumbernick is a nurse who went with the group in 2012. He met the host family’s daughter, Daniela, who was in medical school. They communicated via skype and other electronic means for a year. When Andrew went down the second year, the couple got a little more serious and Andrew asked Daniela’s parents for permission to date their daughter. Honduras still has a formal culture in which men ask permission to date a young lady. Daniela’s parents agreed. When Andrew proposed, Daniela’s father was a little uncomfortable so they continued dating. In May of 2015, Daniela came to visit Andrew for a week, accompanied by her sister. The couple were married in Las Vegas. In December of that year they had a traditional church wedding in Honduras.