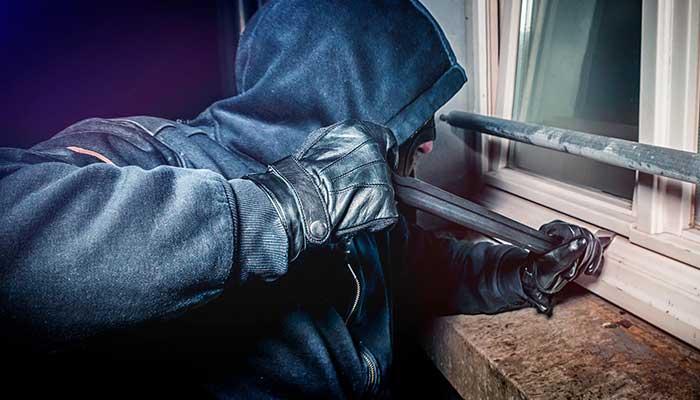 Safford police were dispatched to a home on Cherokee Lane at about 12:30 in the morning Friday in reference to a possible home invasion in progress. While en route to the scene, officers were notified that there was broken glass from a window inside the house and that there may still be somebody inside the residence. The alarm system showed that the garage door alarm had been activated.

Upon arrival, officers announced themselves and entered the residence. The woman advised that she was in her bedroom and was the one who unlocked the doors.  Two officers entered the house and cleared all the rooms, making sure the suspect was no longer on the scene.

The intruder apparently entered through a window on the west side of the house. There was broken glass in the living room/kitchen area and a shoe print on the couch. The sliding glass door leading to the back yard was broken and open. In the dining area, a purse was on the floor with the wallet open and cards scattered next to it. Once the house was secured, officers went into the backyard. They found an Igloo water cooler underneath the window that was broken. There was a footprint on the white lid of the cooler.

When authorities interviewed the woman, she told them she had been asleep and woke up to a noise in the living room. She heard more movement, then saw a flashlight coming from the area. She called 911 to report an intruder in her home. Valley Security also contacted dispatch to report a breach in the security system. Dispatch advised the woman to unlock the front door and then lock herself in her bedroom and wait for police.

When police showed the woman her purse that was scattered on the floor, she told them the purse was originally on a bar stool and that it had $100 in cash that was missing. The woman told police that she didn’t know who could have broken into her home. One of the officers told her that it appeared that the suspect knew what they were looking for and had targeted her purse.

Two officers located shoe prints in the alley that matched the ones on the couch and water cooler. Relatives arrived on the scene and suggested a possible suspect that lives in the trailer park on Golf Course Road. Officers found tracks on Canal Road near the trailer park, but didn’t have information about which space the suspect lives in.

The case was turned over to Safford Detectives.