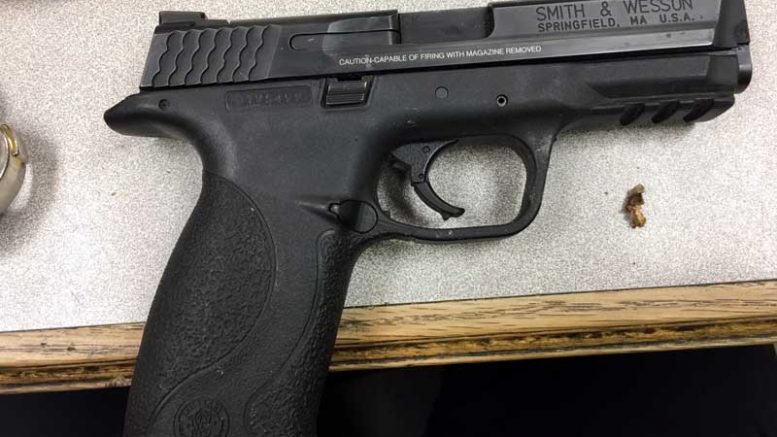 Contributed Photo/Courtesy SPD: A prohibited possessor was found with this 9mm gun among numerous other weapons during a traffic stop.

SAFFORD – A man who is believed to be a prohibited possessor of weapons due to a felonious history was found to have not only a gun and ammunition but a plethora of various weapons.

According to a Safford Police report, Gabriel Greg Brockmeier, 40, of Thatcher, was eastbound on 4th Street in a blue Jeep when he failed to use his turn signal while making a right turn onto Central Avenue. The officer soon caught up with Brockmeier and performed a traffic stop at the Giant gas station at 105 E. U.S. Highway 70. In addition to the failure to use his turn signal, Brockmeier’s license plate was expired and he did not have the required automobile registration or insurance, according to the report.

As per their usual line of questioning, the officer began with asking if there were any guns or weapons in the vehicle and Brockmeier allegedly denied having any in the Jeep.

Since the Jeep didn’t have registration or insurance, the officer began the process of impounding it, which includes an inventory of all the items inside the vehicle. Upon starting his inventory, the officer located a bag in the back seat behind the driver. Inside the bag was a Smith & Wesson M&P 9mm semiautomatic pistol with a fully loaded magazine. Also in the bag were several fixed-blade knives, additional 9mm ammunition, 12-gauge ammunition, a set of brass knuckles and a battle axe/hatchet with a pointed end. 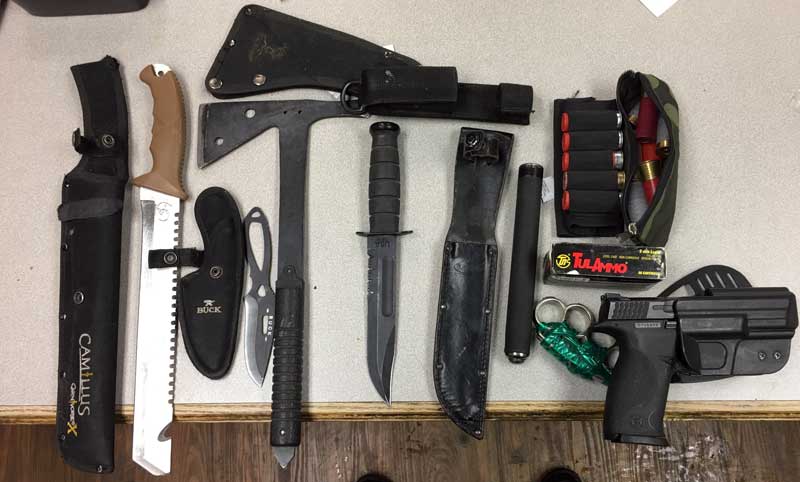 Contributed Photo/Courtesy SPD: This picture shows the variety of knives and weapons the prohibited possessor had in his Jeep.

The officer believed Brockmeier to be a prohibited possessor of weapons due to his felonious history, including guilty charges of theft and burglary. Brockmeier had his civil rights restored in 2004 for those charges, however, he was sent back to prison in 2009 on an aggravated DUI charge, which gave him a new felony. A person who has been found guilty of a felony and who has not had their rights restored to them by the court may not possess any weapons. Brockmeier allegedly said he thought he was allowed to have weapons and didn’t think it was an issue.

Brockmeier was given a ride to a residence on 8th Avenue and released. The officer confiscated the weapons and submitted his report to the Graham County Attorney’s Office for review with a suggestion of a charge of misconduct involving weapons, as well as transportation violations of not having the vehicle currently registered or insured.