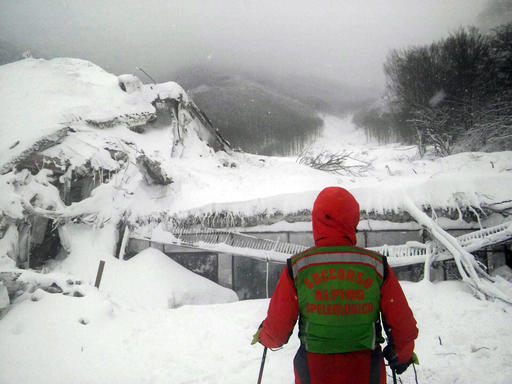 A rescuer stands in front of the Rigopiano Hotel hit by an avalanche in Farindola, Italy, early Thursday, Jan. 19, 2017. Rescue workers were met with an eerie silence Thursday when they reached a four-star spa hotel struck by an avalanche in a mountainous earthquake-stricken region of central Italy. At least 30 people were missing, including at least two children, authorities said. (Corpo Nazionale Soccorso Alpino e Speleologico/The National Alpine Cliff and Cave Rescue Corps (CNSAS) via AP)

PENNE, Italy (AP) — Rescue workers reported no signs of life Thursday at a four-star hotel buried by an avalanche in the mountains of earthquake-stricken central Italy. Two bodies were recovered of the estimated 30 people trapped inside as the risk of more avalanches slowed the search effort.

Two people escaped the devastation at the Hotel Rigopiano, in the mountains of the Gran Sasso range, and called for help, but it took hours for responders to reach the remote zone on skis.

Days of heavy snowfall had knocked out electricity and phone lines in many central Italian towns and hamlets, and four powerful earthquakes struck the region on Wednesday.

It wasn’t immediately clear if any of the quakes triggered the avalanche. But firefighters said the sheer violence of the 300-yard-wide (meter) snow slide on Wednesday uprooted trees in its wake and wiped out parts of the hotel.

“There are mattresses that are hundreds of meters away from where the building was,” firefighters’ spokesman Luca Cari told the ANSA news agency.

The hotel in the Abruzzo region is about 30 miles (45 kilometers) from the coastal city of Pescara, at an altitude of about 3,940 feet (1,200 meters). The area, which has been buried under as much as nine feet (three meters) of snowfall for days, is located in the broad swath of central Italy between Rieti and Teramo that was jolted by Wednesday’s quakes, one of which had a 5.7 magnitude.

Accounts emerged of hotel guests messaging rescuers and friends for help Wednesday, with at least one attempt at raising the alarm rebuffed for several hours.

Giampiero Parete, a chef vacationing at the hotel, called his boss when the avalanche struck and begged him to mobilize rescue crews. His wife Adriana and two children, Ludovica and Gianfilippo, were trapped inside, the employer, Quintino Marcella, told The Associated Press.

Parete had left the hotel briefly to get some medicine for his wife from their car, and survived as a result.

“He said the hotel was submerged and to call rescue crews,” Marcella said, adding that he phoned police and the Pescara prefect’s office, but that no one believed him. “The prefect’s office said it wasn’t true, because everything was OK at the hotel.”

Marcella said he insisted, and called other emergency numbers until someone finally took him seriously and mobilized a rescue at 8 p.m., more than two hours later.

When rescuers on skis arrived at the hotel in the early morning hours of Thursday, they found just two people alive: Parete and Fabio Salzetta, identified by Italian media as a hotel maintenance worker. There were no other signs of life, with rescue crews saying their shouts received no replies.

Walter Milan, spokesman for the National Alpine rescue corps, said rescue teams tried to reach the site in a snowplow but were blocked by uprooted trees and rocks on the road. Crews donned cross-country skis for the final seven-kilometer, two-hour stretch to reach the hotel.

“The access is not easy, the bad weather didn’t help. There is a lot of snow but I have to say that our work is going on quickly considering the size of the avalanche,” he told reporters in Penne, the staging area for the rescue.

He said the search effort consisted first of doing a sight and sound survey of the area, and then breaking up the disaster zone into smaller pockets and moving to investigate each quadrant.

Heavy equipment — snowplows and other earthmoving equipment — were struggling to reach the area and only 25 vehicles had arrived, along with 135 rescue workers, said Civil Protection operations chief Titi Postiglione. She said the risk of further avalanches was slowing the delicate work.

“It’s an enormously complex situation, and we are very concerned,” she said.

Parete, the chef, was being treated for hypothermia at a hospital in Pescara. The Romanian foreign ministry reported three Romanian citizens missing in the hotel — an adult and two children, who were believed to be Parete’s family. 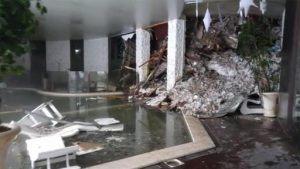 This photo taken from a video shows show piles of snow and rubble cascading down the stairway into the foyer of the hotel Rigopiano in Farindola, Italy, early Thursday, Jan. 19, 2017. A hotel in the mountainous region hit again by quakes has been covered by an avalanche, with reports of dead. Italian media say the avalanche covered the three-story hotel in the central region of Abruzzo, on Wednesday evening. (Italian Finance Police via AP)

Video shot by rescue teams entering the still-standing parts of the hotel showed huge piles of filthy snow and debris piled up inside the corridors, stairwells and the indoor pool area. There was no sound except for the steps of the cameraman. The largest wall of snow was in the pool area, where plastic lounge chairs were flipped on their sides and Christmas decorations still dangled from the ceiling.

The bar area appeared flooded, with nearby cracked skylights covered with snow outside.

Aerial video shot by helicopter crews showed rescue workers on top of the snow-covered hotel, digging to try to get in. Later in the day, a helicopter brought in boxes of food for rescue teams.

Civil protection authorities said that about 30 people were missing. By Thursday afternoon, two bodies had been removed.

Premier Paolo Gentiloni, arriving at the regional civil protection headquarters at midday Thursday, sought to deflect criticism of the rescue work and urged authorities to redouble efforts to reach people still isolated by the quakes and snow across the quake zone.

House-bound residents have been complaining for days of being without electricity and phone service because of what Gentiloni called a “record snowfall.”

“I ask everyone if possible to multiply their efforts,” he said. “I ask politicians to show sobriety respecting the difficulty of the situation and the commitment of civil and military crews who are responding.”

The buried hotel was just one of several rescues underway: Police video showed a gray-haired man being led to safety by rescuers through a path dug through deep snow elsewhere else in the region.

Snow continued to fall Thursday with reports of people being isolated in many places. Daiana Nguyen, a resident of a town in the province of Teramo, told SKY TG24 that 10 feet (three meters) of snow had fallen and that people were “completely isolated.”

“They talk about sending in the army: Thirty to 40 men came with shovels. We need heavy machinery!” she said.

The timing of the avalanche remained unclear, but the hotel posted a notice on its Facebook page that its phones were down early in the morning, around the time of the first of Wednesday’s quakes.

Gianluca Valensise, seismologist at Italy’s national vulcanology center, said it wasn’t clear if the quakes triggered the avalanche, since so much snow had accumulated in recent days. The closest monitors to the hotel didn’t indicate a strong ground acceleration even during the biggest quake, suggesting it wasn’t felt particularly strongly in the mountains.

“At the most it was a trigger, but certainly not the reason,” he said. “The avalanche certainly would have come down sooner or later, but the distance from the epicenter is quite substantial.”

Marcella, the restaurant owner, said he received the call from Parete at around 5:30 p.m. He reported that all of the guests had checked out and were waiting for the roads to be cleared Wednesday afternoon when the avalanche struck.

The mountainous region of central Italy has been struck by a series of quakes since August that destroyed homes and historic centers in dozens of towns and hamlets. A deadly quake in August killed nearly 300 people. No one died in the strong aftershocks in October largely because population centers had already been evacuated.