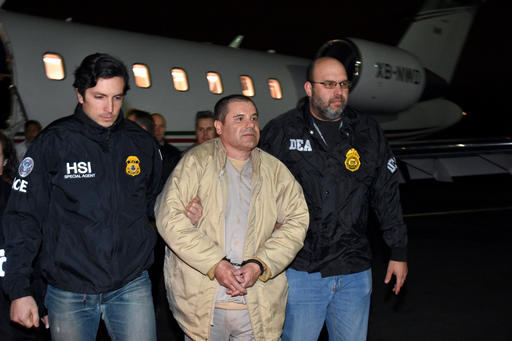 In this photo provided by U.S. law enforcement, authorities escort Joaquin "El Chapo" Guzman, center, from a plane to a waiting caravan of SUVs at Long Island MacArthur Airport on Thursday, Jan. 19, 2017, in Ronkonkoma, N.Y. The infamous drug kingpin who twice escaped from maximum-security prisons in Mexico was extradited at the request of the U.S. to face drug trafficking and other charges, and landed in New York late Thursday, a federal law enforcement official said. (U.S. law enforcement via AP)

NEW YORK (AP) — In a scene U.S. authorities had dreamed of for decades, Mexican drug lord and escape artist Joaquin “El Chapo” Guzman was hauled into an American courtroom Friday and then taken away to an ultra-secure jail that has held some of the world’s most dangerous terrorists and mobsters.

Holding his unshackled hands behind his back, a dazed-looking Guzman quietly entered a not-guilty plea to drug trafficking and other charges at a Brooklyn courthouse ringed by squad cars, officers with assault rifles, and bomb-sniffing dogs.

“He’s a man known for a life of crime, violence, death and destruction, and now he’ll have to answer for that,” Robert Capers, the U.S. attorney in Brooklyn, said at a news conference.

The court appearance came hours after Guzman’s Thursday night extradition from Mexico, where he had become something of a folk hero for two brazen prison escapes.

Guzman, who is in his 50s, was ordered held without bail in a special Manhattan jail unit where other high-risk inmates — including Mafia boss John Gotti and several close associates of Osama bin Laden — spent their time awaiting trial.

“It is difficult to imagine another person with a greater risk of fleeing prosecution,” prosecutors wrote in court papers.

Prosecutors described Guzman as the murderous overseer of a three-decade campaign of smuggling, brutality and corruption that made his Sinaloa cartel a fortune while fueling an epidemic of cocaine abuse and related violence in the U.S. in the 1980s and ’90s.

Guzman faces the possibility of life in prison. To get Mexico to hand him over, prosecutors agreed not to seek the death penalty. They are also demanding he forfeit $14 billion in assets.

Outside court, Guzman defense attorney Michael Schneider said: “I haven’t seen any evidence that indicates to me that Mr. Guzman’s done anything wrong.” He also said he would look into whether his client was extradited properly to New York.

The U.S. has been trying to get custody of Guzman since he was first indicted in California in the early 1990s.

American authorities finally got their wish on the eve of Donald Trump’s presidential inauguration, though it was not clear if the timing of the extradition was intended as a sign of respect to the Republican or some kind of slap, perhaps an effort to let outgoing President Barack Obama take the credit.

While Guzman faces federal charges in several U.S. states, federal prosecutors in Brooklyn won the jockeying to get the case. The U.S. attorney’s office in Brooklyn has substantial experience prosecuting international drug cartel cases and was once led by outgoing U.S. Attorney General Loretta Lynch.

New York City also boasts one of the most secure lockups in the United States, the Metropolitan Correctional Center in lower Manhattan. The drab-looking building is protected by steel barricades that can stop up to 7 1/2 tons of speeding truck, and the area is watched by cameras capable of reading a newspaper a block away.

The jail’s inmates have included Ramzi Yousef, who was the architect of the 1993 World Trade Center bombing, and Ponzi king Bernard Madoff.

In the special high-security wing for the riskiest inmates, around a dozen prisoners spend 23 hours a day in roughly 20-by-12-foot cells, prohibited from communicating with one another. Meals are eaten in cells, and exercise is in a recreation area specifically for these inmates.

Only a limited number of carefully vetted jailers would be allowed access to an inmate with Guzman’s wealth and potential to corrupt people, said Catherine Linaweaver, a former Metropolitan Correction Center warden who retired in 2014.

The jail saw an audacious escape attempt in 1982, when two armed people in a hijacked sightseeing helicopter tried to pluck an inmate off a roof. Four years earlier, three prisoners broke out by cutting through window bars.

Guzman, whose nickname means “Shorty,” presided over a syndicate that funneled tons of cocaine from South America into the U.S. via tunnels, tanker trucks, planes, container ships, speedboats and even submarines, prosecutors said.

Initially arrested in 1993, he broke out of a maximum-security Mexican prison in 2001, apparently in a laundry cart, and became a folk legend among some Mexicans, immortalized in song.

He was caught in 2014 but escaped again, this time through a hole in his prison cell shower. A specially rigged motorcycle on rails whisked him to freedom through a mile-long tunnel. He was recaptured in a January 2016 shootout that killed five associates.