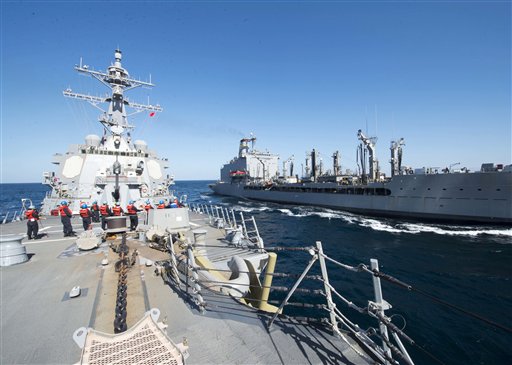 In a letter to the defense minister published on the president’s website, Rouhani said Iran won’t accept any limitations on its missile program.

A senior U.S. official told the AP on Wednesday that America is considering designating a number of additional targets for sanctions related to Iran’s ballistic missile program.

Both the U.S. and Iran insist the missile program is not part of a landmark agreement Tehran reached with world powers in July that is to lift international sanctions in exchange for Iran curbing its nuclear program.

“Apparently, the U.S. government … is considering adding new individuals and institutions to the list of its previous oppressive sanctions,” Rouhani said in the letter. “It’s necessary to continue with greater speed and seriousness the plan for production of various missiles needed by the armed forces within the approved defense policies,” he wrote.

Rouhani added that the “development and production of Iran’s ballistic missiles, which have not been designed to carry nuclear warheads, are important conventional instruments to defend the country and will continue.”

Iran had earlier denied U.S. accusations that it launched a provocative rocket test last week near Western warships in the Strait of Hormuz, dismissing the claim as “psychological warfare.”

Gen. Ramezan Sharif, a Revolutionary Guard spokesman, said its forces did not carry out any drills in the key Persian Gulf waterway. Sharif said the security of the strategic Persian Gulf remains among Iran’s top priorities. His comments were posted on the Guard’s website.

While the rockets weren’t fired in the direction of any ships, Raines said Iran’s actions were “highly provocative.”

“Firing weapons so close to passing coalition ships and commercial traffic within an internationally recognized maritime traffic lane is unsafe, unprofessional and inconsistent with international maritime law,” he said.

Nearly a third of all oil traded by sea passes through the Strait of Hormuz, which has been the scene of past confrontations between America and Iran, including a one-day naval battle in 1988, during the Iran-Iraq war.