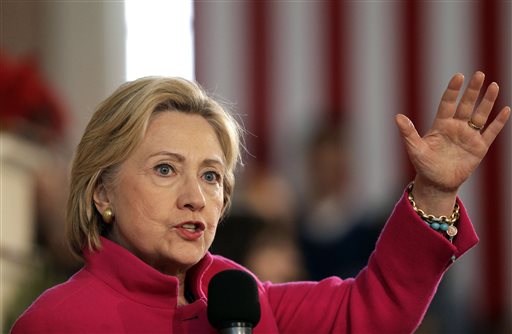 FILE - In this Dec. 29, 2015 file photo, Democratic presidential candidate Hillary Clinton speaks during a campaign event at South Church in Portsmouth, N.H. The State Department will be delivering a New Year's Eve batch of more emails from Hillary Clinton's time as secretary of state, bringing 2015 to a close for the Democratic presidential front-runner. Clinton has faced questions about whether her use of a private email server was sufficient to ensure the security of government information and retention of records. (AP Photo/Steven Senne, File)

WASHINGTON (AP) — The State Department will be delivering a New Year’s Eve batch of more emails from Hillary Clinton’s time as secretary of state, bringing 2015 to a close for the Democratic presidential front-runner.

Clinton has faced questions about whether her use of a private email server was sufficient to ensure the security of government information and retention of records. The State Department has released installments of her emails every month since May.

Thursday’s emails will be the second-to-last set of messages released to the public with the final segment expected just before the Iowa caucuses on Feb. 1.

Here are some questions and answers about Clinton’s email:

Q: What emails are these?

A: These are the work-related emails that Clinton sent and received on the private, unsecured server in her home in New York while she was President Barack Obama’s secretary of state from 2009 through January 2013. She turned over 55,000 pages of emails to the State Department for the historical record and to be released to the public. Clinton contends that she never sent or received emails that were marked classified at the time but some emails on her server were later deemed top secret or included confidential or sensitive information.

Q: What have we learned so far?

A: The messages have shown how Obama’s secretary of state dealt with a series of foreign policy hurdles, from the Arab Spring in the Middle East to the deadly 2012 attacks in Benghazi, Libya, and efforts to curb Iran’s nuclear ambitions. It has also offered a more private window into Clinton’s daily life, showing her asking an aide to help her find Showtime’s CIA-focused drama “Homeland,” getting political intelligence from longtime allies and managing a busy schedule and flights around the globe.

A: By court order, the State Department is required to release as many of her emails as they can in a single installment on the last weekday of every month. The emails have been disseminated in increments that allow the department to review the emails and redact sensitive information. The blacked out material has ranged from actual secrets to the personal addresses and emails of people with whom Clinton has corresponded.

Q: How many emails are there?

A: It has varied from month to month, but the State Department estimates that this batch will include about 5,500 pages of emails. While the documents tend to be voluminous, many have included terse replies from Clinton, such as, “Pls print,” or “Ok. Thx.”

Q: Will the State Department meet its court-ordered goal of 82 percent by the end of 2015?

Q: When and where will the emails be posted?

A: The State Department is expected to post them on its website Thursday. Past emails have been released here: https://www.foia.state.gov/Learn/New.aspx.