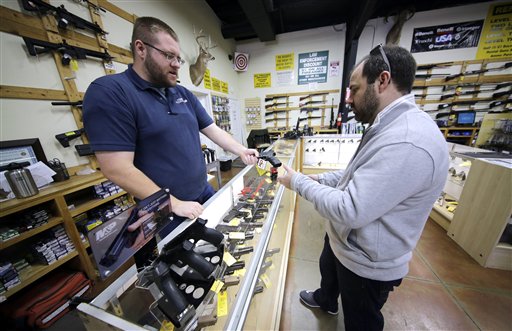 Mike Howse, left, helps David Foley as he shops for a handgun at the Spring Guns and Ammo store Monday, Jan. 4, 2016, in Spring, Texas. President Barack Obama defended his plans to tighten the nation's gun-control restrictions on his own, insisting Monday that the steps he'll announce fall within his legal authority and uphold the constitutional right to own a gun. (AP Photo/David J. Phillip)

Obama’s plan to broaden background checks forms the centerpiece of a broader package of gun control measures the president plans to take on his own in his final year in office. Although Obama can’t unilaterally change gun laws, the president is hoping that beefing up enforcement of existing laws can prevent at least some gun deaths in a country rife with them.

“This is not going to solve every violent crime in this country,” Obama said. Still, he added, “It will potentially save lives and spare families the pain of these extraordinary losses.”

Under current law, only federally licensed gun dealers must conduct background checks on buyers, but many who sell guns at flea markets, on websites or in other informal settings don’t register as dealers. Gun control advocates say that loophole is exploited to skirt the background check requirement.

Now, the Justice Department’s Bureau of Alcohol, Tobacco, Firearms and Explosives will issue updated guidance that says the government should deem anyone “in the business” of selling guns to be a dealer, regardless of where he or she sells the guns. To that end, the government will consider other factors, including how many guns a person sells and how frequently, and whether those guns are sold for a profit.

The executive actions on gun control fall far short of what Obama and likeminded lawmakers attempted to accomplish with legislation in 2013, after a massacre at a Connecticut elementary school that shook the nation’s conscience. Even still, the more modest measures were sure to spark legal challenges from those who oppose any new impediments to buying guns.

Obama’s announcement was hailed by Democratic lawmakers and gun control groups like the Brady Campaign to Prevent Gun Violence, which claimed Obama was making history with “bold and meaningful action” that would make all Americans safer. Hillary Clinton, at a rally in Iowa, said she was “so proud” of Obama but warned that the next president could easily undo his changes.

“I won’t wipe it away,” Clinton said.

“I will work with my colleagues to respond appropriately to ensure the Constitution is respected,” Corker said.

Far from mandating background checks for all gun sales, the new guidance still exempts collectors and gun hobbyists, and the exact definition of who must register as a dealer and conduct background checks remains exceedingly vague. The administration did not issue a number for how many guns someone must sell to be considered a dealer, instead saying it planned to remind people that courts have deemed people to be dealers in some cases even if they only sell a handful of guns.

And the background check provision rests in the murky realm of agency guidelines, which have less force than full-fledged federal regulations and can easily be rescinded. Many of the Republican presidential candidates running to succeed Obama have vowed to rip up his new gun restrictions upon taking office.

In an attempt to prevent gun purchases from falling through the cracks, the FBI will hire 230 more examiners to process background checks, the White House said, an increase of about 50 percent. Many of the roughly 63,000 background check requests each day are processed within seconds. But if the system kicks back a request for further review, the government only has three days before federal law says the buyer can return and buy the gun without being cleared.

That weak spot in the system came under scrutiny last summer when the FBI revealed that Dylann Roof, the accused gunman in the Charleston, S.C., church massacre, was improperly allowed to buy a gun because incomplete record-keeping and miscommunication among authorities delayed processing of his background check beyond the three-day limit.

The White House also said it planned to ask Congress for $500 million to improve mental health care, and Obama issued a memorandum directing federal agencies to conduct or sponsor research into smart gun technology that reduces the risk of accidental gun discharges. The Obama administration also plans to complete a rule, already in the works, to close another loophole that allows trusts or corporations to purchase sawed-off shotguns, machine guns and similar weapons without background checks.

Obama planned to announce the new measures at an event at the White House on Tuesday as he continued a weeklong push to promote the gun effort and push back on its critics.

He met at the White House on Monday with Democratic lawmakers who have supported stricter gun control, and planned to take his argument to prime time Thursday with a televised town hall discussion. The initiative also promised to be prominent in Obama’s final State of the Union address next week.

Whether the new steps will effectively prevent future gun deaths remained unclear. Philip Cook, a Duke University professor who researches gun violence and policy, said surveys of prisoners don’t show gun shows to be a major direct source of weapons used in violent crime. The attorney general, asked how many dealers would be newly forced to register, declined to give a number.

Associated Press writers Eric Tucker, Alicia A. Caldwell and Stacy A. Anderson in Washington and Ken Thomas in Des Moines, Iowa, contributed to this report.

Reach Josh Lederman on Twitter at http://twitter.com/joshledermanAP. His work can be found at http://bigstory.ap.org/author/josh-lederman