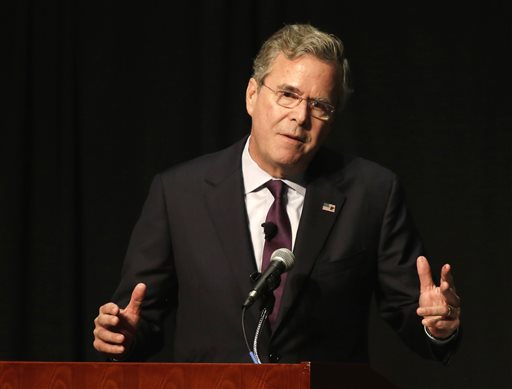 FILE - In this Dec. 28, 2015, file photo, Republican presidential candidate, former Florida Gov. Jeb Bush speaks in West Palm Beach, Fla. Despite a year of campaigning, 10 televised debates and millions of dollars in advertising, most people in even the earliest voting presidential voting states are just now beginning to focus on their choices in the 2016 campaign. (AP Photo/Terry Renna, File)

WASHINGTON (AP) — The latest developments in the 2016 presidential campaign (all times EST):

Former Florida Gov. Jeb Bush is rolling out a new set of policies aimed at curbing addiction and stopping the flow of illegal drugs. His proposal comes a day before he joins other presidential hopefuls at an addiction forum in early-voting New Hampshire, where an estimated 400 people died from drug overdoses in 2015.

Bush’s team says his new policy focuses on heroin and other drug abuse as both a health and criminal justice issue. His ideas include creating more drug courts to send non-violent drug offenders through treatment programs and cracking down on the overprescribing of painkillers and the flow of illicit drugs into the country. He says he’d make the Director of the Office of the National Drug Control Policy a cabinet-level position.

A summary of Bush’s plans provided by the campaign do not outline how much Bush would spend on drug-related policies. But his plan suggests the federal government is currently spending money inefficiently, and he promises a review and overhaul of spending to focus on evidence-based practices. Several presidential candidates have visited a peer-based recovery center while campaigning in New Hampshire, and Bush specifically highlights support for such programs in his plan.

Republican presidential candidate Donald Trump’s campaign says they intentionally used footage of Morocco in a television ad that touches on U.S. border security. The campaign said in a statement the images were “selected to demonstrate the severe impact of an open border and the very real threat Americans face if we do not immediately build a wall and stop illegal immigration.”

The campaign insists “the biased mainstream media doesn’t understand, but Americans who want to protect their jobs and their families do.”

The billionaire celebrity launched his campaign characterizing Mexican immigrants as criminals and rapists, and promising to build a wall “with a big, beautiful door,” to stop illegal immigration from Mexico.

The Democratic presidential candidate, in Davenport Monday, said that Republicans are “willing to turn their back on 19 million Americans” who have benefited from the law. She warned it would empower the insurance and drug industry.

The legislation will be considered in the House later this week and is expected to mark the first time a bill repealing the health care law reaches Obama’s desk. Obama will veto the measure, which would repeal the law and cut money for Planned Parenthood.

Clinton said Republicans have “no plan” of their own and only want to “undo what Democrats have fought for decades.”

She said if a Republican is in the White House, “it will be repealed and then you will have to start all over again.”

The longstanding fight over the so-called Obamacare law is expected to continue during January. GOP leaders in Congress are planning to hold a veto override vote later this month to coincide with events in Washington with anti-abortion activists.

Supporters of Republican presidential candidate Ted Cruz say they are spending $1 million on television and radio advertisements that portray rival Marco Rubio as unserious — using fantasy football as a means for getting their message across. Left unsaid is that the Rubio footage included is a spoof made by the candidate himself.

The 30-second TV version of the ad opens with images of armed soldiers and a warning that the Islamic State terrorist group is “plotting to kill Americans.” It soon pivots to the question, “What would Marco Rubio’s leadership look like?” and shows him at a laptop computer and on a mobile phone. “Yeah, I know I have a debate, but I’ve got to get this fantasy football thing right, OK?” The ad concludes by saying “America can’t afford to gamble with its safety.”

The fantasy football clip is from Rubio’s own campaign. It was meant as comedy relief before the GOP debate in October. The campaign put the video on Youtube and included a link to sign up to support Rubio.

The anti-Rubio ad is paid for mostly by Robert Mercer, a New York hedge fund magnate who is contributing to a super political action committee that faces no campaign finance restrictions and has pledged support to Cruz.

Rubio’s aides dismissed the strategy, with his New Hampshire-based senior adviser Jim Merrill writing on Twitter that the ad is “redefining dumb.”

Texas Sen. Ted Cruz is speaking out against armed protesters who have taken over a national wildlife refuge in Oregon.

Cruz told reporters Monday before a campaign stop in Boone, Iowa, that he hopes the protesters will “stand down peaceably” with no violent confrontation “sooner rather than later.”

Jeb Bush is hinting strongly that his closing argument to New Hampshire voters will be about U.S. military buildup specifically aimed at defeating the Islamic State group.

In a new television advertisement Monday, the former Florida governor, whose campaign rests on how he competes in the leadoff primary next month, features excerpts from a speech he delivered last month in South Carolina. The ad debuted as he gears up for a three-day campaign trip in New Hampshire beginning Tuesday.

Bush has called for a broad international coalition led by the United States and Arab nations to destroy the group, now rooted in Iraq, Syria and elsewhere in the region. The group claimed responsibility for the November bombings and shootings in Paris in which roughly 130 were killed. U.S. residents, said to have been loyal to the militant group, were also responsible for the deadly shootings in San Bernadino, Calif. last month.

Though Bush is not a military veteran, he has been traveling throughout New Hampshire frequently with retired military veterans and Congressional Medal of Honor recipients, to boost his national security credentials. The ad features footage from a speech gave at the Military College of the South, known as the Citadel, in Charleston South Carolina last month.

Bush is scheduled to campaign in Dover Tuesday.

Marco Rubio is lashing out at Republican rivals in a New Hampshire speech focused on national security.

The Florida Republican declined to call them out by name in the Monday morning address, but said some Republican presidential candidates would weaken the nation’s military and intelligence programs designed to prevent terrorism.

“They talk tough,” Rubio said in prepared remarks, “yet they would strip us of the ability to keep our people safe.”

The shot, and others like it, was a clear reference to Texas Sen. Ted Cruz and Kentucky Sen. Rand Paul.

Cruz in particular has emerged as a top competitor to Rubio with Iowa’s leadoff caucuses less than a month away. Cruz has called for limits on U.S. intervention abroad, while Rubio has aligned himself with his party’s national security hawks.

The Florida senator is looking to strengthen the U.S. government’s intelligence gathering programs at home. He also said in the Monday address he has “no qualms” about treating Americans as enemy combatants if they betray their country by refusing to disclose “actionable information” about terrorist threats.

Republican presidential candidate Chris Christie will lay out the case for his candidacy in a speech Monday that will paint him not only as the only candidate who understands the anger felt by GOP voters, but the only one who has the experience to fix what’s broken.

“It’s not enough to just express anger–we must also elect someone who knows how to get things done,” the New Jersey governor will say, according to excerpts released by his campaign early Monday.

The speech appears aimed at trying to sell Christie as a less risky alternative to Trump.

It takes numerous veiled shots at the billionaire businessman who dominated the race in late 2015.

“These times and these challenges demand a grown-up,” the preview detailed.

Christie closed out the year with growing momentum in early-voting New Hampshire.

He’ll also call on the Republican Party to unite behind a single candidate and focus on defeating Democratic front-runner Hillary Clinton.

The ad is the billionaire businessman’s first foray into the world of television advertising after spending 2015 dominating polls and headlines while largely avoiding major spending.

“The politicians can pretend it’s something else. But Donald Trump calls it radical Islamic terrorism. That’s why he’s calling for a temporary shutdown of Muslims entering the United States until we can figure out what’s going on,” a narrator says.

The ad continues by saying that Trump will “quickly cut the head off ISIS and take their oil,” using an acronym for the Islamic State group. “He’ll stop illegal immigrants by building a wall on our southern border that Mexico will pay for.”

It ends with Trump, at one of his rallies, vowing to “make America great again.”

The ad will begin airing in Iowa and New Hampshire on Tuesday, Trump’s campaign said in a statement.

Republican presidential candidate Donald Trump has debuted his first campaign ad, which is set to air in early voting states of Iowa and New Hampshire.

The billionaire businessman said in a statement Monday he will begin spending at least $2 million dollars per week on his campaign, with $1.1 million allocated to television ads in Iowa and close to $1 million on TV ads in New Hampshire

The initial ad, scheduled to begin airing on Tuesday, focuses on key issues including national security and illegal immigration.

Trump has already aired radio ads in the first three primary states. The Iowa caucus — the first in early voting — is scheduled for Feb. 1.