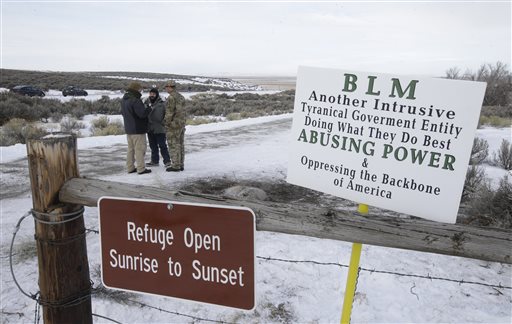 Members of the group occupying the Malheur National Wildlife Refuge headquarters stand guard Monday, Jan. 4, 2016, near Burns, Ore. The group calls itself Citizens for Constitutional Freedom and has sent a "demand for redress" to local, state and federal officials. The armed anti-government group took over the remote national wildlife refuge in Oregon as part of a decades-long fight over public lands in the West. (AP Photo/Rick Bowmer)

An armed group occupying the headquarters of a national wildlife refuge in southeastern Oregon wants the federal government to relinquish the land to local officials so it becomes more accessible for ranching, mining and other uses.

Less visible efforts to wrest control of federal lands date back more than a century in the West, where the U.S. government manages most of the land in some states.

HOW MUCH LAND DOES THE FEDERAL GOVERNMENT OWN?

It controls about a million square miles, mostly in the West, according to the Congressional Research Service. It owns 85 percent of Nevada, 66 percent of Utah, 62 percent of both Idaho and Alaska, and 53 percent of Oregon.

Most of the land is managed by U.S. agencies including the Forest Service, Bureau of Land Management, Fish and Wildlife Service and National Park Service.

The federal government also owns significant portions of California and Wyoming, at 48 percent each;Arizona, at 42 percent; Colorado, at 36 percent; New Mexico, at 35 percent; Montana, at 29 percent; and Washington state, at 28 percent.

HOW DID THE GOVERNMENT ACQUIRE SO MUCH LAND?

As the country expanded West, the federal government sought to protect some areas, such as Yellowstone National Park in 1872, and took control in the 1900s of unclaimed areas that were generally too harsh and difficult for homesteaders to make a living.

For example, the U.S. Bureau of Land Management administers much of the sagebrush steppe of the Great Basin, which is habitat for the imperiled sage grouse but unsuitable for farming.

IS THE LAND-CONTROL CONFLICT NEW?

No. The debate over management of federal land has spanned decades. Some state officials and others contend that state control would mean less regulation and greater freedom for ranchers, miners, recreationists and others, boosting state income.

Critics of that view say the land would be too expensive for states to maintain and would be sold off to private interests, cutting off access to the public.

Congress approved a law in 1976 saying that remaining public land would stay under federal control.

WHAT EFFORTS ARE STATES MAKING TO CONTROL FEDERAL LAND?

State lawmakers, notably in Utah and Idaho, have sought a legal way to take control of federal land. However, Idaho Attorney General Lawrence Wasden has said the state’s constitution gave up claims to the land when Idaho joined the union.

Congress has the authority to turn over federal land to the states, but efforts to pass such a law have failed so far.

WHAT’S SPECIAL ABOUT THE LAND IN OREGON?

President Theodore Roosevelt created the Malheur National Wildlife Refuge in 1908. Administered by the U.S. Fish and Wildlife Service, the 300-square-mile refuge is partly a marshland that’s a key rest area in the Oregon high desert for migrating birds.

The number of migrating shorebirds qualifies the refuge as a Regional Western Hemispheric Shorebird Reserve, the wildlife service says. It also supports more than 20 percent of the state’s breeding population of greater sandhill cranes, as well as many other species.

Birding is a popular pastime at the refuge, which also draws anglers, hunters and wildlife watchers.