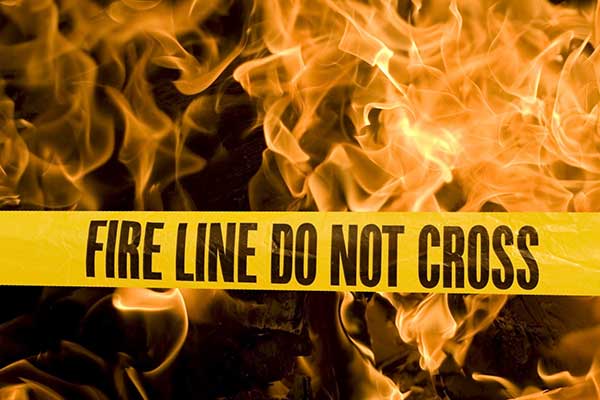 SAFFORD – On Monday, as an officer was leaving the police station, he noticed some smoke coming from the area of Court Street. The officer responded to the area of the Court Street Apartments where he found a fire that was rapidly growing in the bottom level garage area of one of the apartments.

The officer attempted to approach the stairway to the front door, however, the fire was too hot and he was unable. A woman from another residence came outside and authorities asked if anyone lived in the apartment. The woman stated that a female lived there and noted that her car was there. The officer went to the other side of the residence and yelled for any occupants to come to the window. There was no response, so the officer climbed on some wood that was leaned against the building and broke the window with a piece of cement. The officer yelled again and this time heard a woman respond. The officer told her to get out of the house because it was on fire and instructed her to come to him.

Another officer had arrived to the scene and was informed that someone was inside. The neighbors had brought their hose out and the second officer took the hose and started to spray the front of the apartment and the woman ran out the front door. Authorities confirmed there was no one else in the apartment and evacuated nearby residences. The officers continued to spray the apartment to try and prevent the fire from spreading until Safford Fire arrived on the scene.

When the officer spoke with the woman of the residence, she stated she was asleep and was awakened by the breaking window. She reported she didn’t know what could have started the fire. Witnesses reported to police that a homeless man was seen the last couple of days in the carport under the apartment where the fire appeared to originate. The day before, the man had been told he could not stay there because he would scare the renter. The man left the area on a bike. The homeless man was believed to have been seen hanging out with other homeless people at Firth Park and the nearby motel. Authorities attempted to locate the man matching the description given, but were unsuccessful.