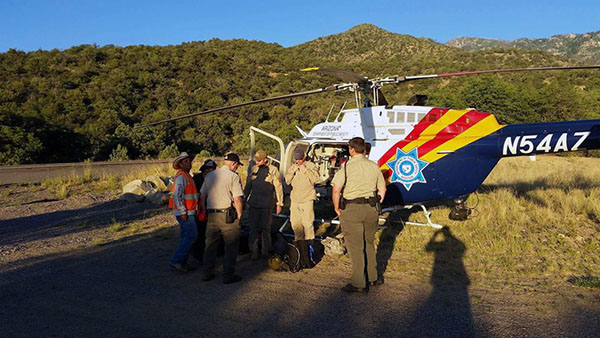 MOUNT GRAHAM – Members of the Graham County Search and Rescue Team traversed dangerous terrain through the night Sunday to reach a stranded hiker on Mount Graham. The hiker was extricated by helicopter the following morning.

Caleb Black, 26, of Oklahoma, intended to hike the Pack Trail from Noon Creek to Plain View Peak on Sunday but ended up getting lost in a canyon above the Maryjilda area, according to Lt. Jerry Nelson, Graham County SAR coordinator.

“He got off on the wrong trail somewhere in there up over where he was,” Nelson said. “It looked like he tried to cross country a little bit and that’s where he got hung up.”

County Dispatch received a call from Black’s father at about 1:02 p.m. on Sunday indicating he was lost on the mountain. Black had apparently been able to text his father of his situation.

Rescuers, with the assistance of an Arizona Department of Public Safety Ranger helicopter, located Black just before twilight but the loss of light delayed the use of the helicopter in the rescue until the following morning. Instead, rescuers dropped water and Gatorade down to Black and a ground team began hiking in to him – a trek that would take nine hours to complete.

“We started at 5 o’clock in the evening to hike up to him . . . (but) we didn’t get to him until Sunday morning,” Nelson said. “That’s how rough and rugged that place is. We knew we had to try to get somebody up to him in case the helicopter wasn’t going to be able to short-haul him.”

The helicopter lifted Black out of the canyon and flew him to the command station set up at Noon Creek. Black was then transported to Mt. Graham Regional Medical Center by Southwest Ambulance, where he was treated for dehydration and exhaustion and released. Nelson said Black would have likely perished on the mountain without the assistance of the team of rescuers.

“He would have never been able to walk out of the canyon,” he said.

The Graham County SAR Team advises hikers to always tell others the area to be hiked, know the area well and bring plenty of water.

“During the daytime, that heat up there will dehydrate you in a hurry,” Nelson said.