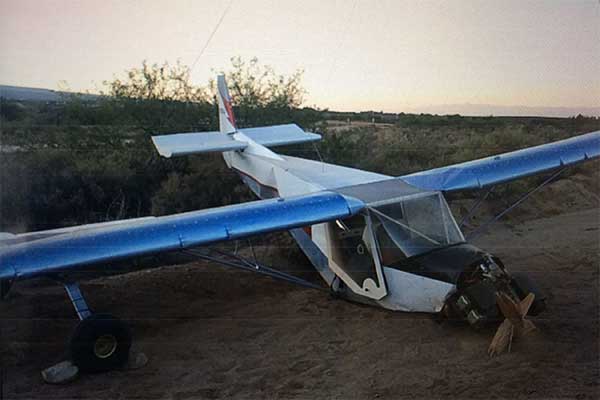 Graham County Sheriff’s deputies were notified of a plane crash in the Artesia area Saturday afternoon at approximately 5:00 p.m. Deputies were dispatched to the area of Artesia Road and Stockton Road where a private plane was sitting in a sandy wash upright with the nose of the plane facing southeast. Two men were standing by the plane. The deputy asked the men if they were okay. Both men declined medical attention.

The pilot, identified as Ronald White, said that they had left the Safford Airport and had been flying for less than an hour when they approached the area of the monastery, which is located about 10 miles south of Safford. The pilot said that a black object that appeared to be a large bird struck the propeller. The impact caused one of the propeller blades to break loose, causing the plane to shake uncontrollably. The pilot shut the engine down and attempted to land the plane on Stockton Road but without power, the pilot was unable glide to the road and was forced to set the plane down in a wash instead.

The hard landing in sand sheared the rear landing gear off and folded the front landing gear up under the plane. Both wings were damaged as well as the fuselage. The propeller was broken. The pilot said that one side of the propeller broke off when the bird hit it and the other side was damaged in the crash.

The Federal Aviation Administration (FAA) was contacted, who asked the deputies to secure the scene and have everyone step away from the plane. The area was secured and blocked by patrol vehicles. When FAA officials released the plane, it was dismantled. The wings were placed on a flatbed trailer. A man who lived nearby offered some equipment to lift the plane onto a trailer. Authorities remained on the scene until the plane was removed.