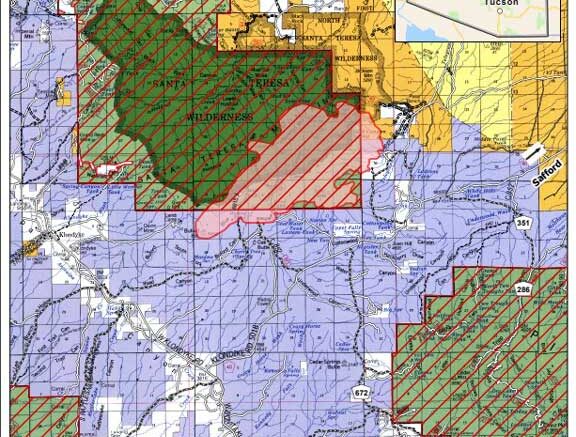 KLONDYKE — Residents north of Aravaipa-Klondyke Road, as well as those to the southeast, were forced to leave their homes Sunday due to spread of the Pinnacle fire.

As of Monday morning, the fire in the Santa Teresa Mountains area has grown to 9,911 acres and is at 0-percent containment. Expectation is that the fire will continue to move northward.

The fire is producing light to moderate smoke that is blanketing the Gila Valley, with air quality defined as moderate, which means sensitive individuals should consider limiting prolonged exposure and avoiding heavy exertion. Weather forecasts call for high pressure building in the area, which could worsen smoke impact.

Firefighters, battling 110-plus degree temperatures with no moisture in the air, will focus on the southern and eastern perimeters of the fire, with emphasis on structure protection as well as seeking out defensible terrain and natural barriers.

Cause of the fire has not yet been determined and remains under investigation.