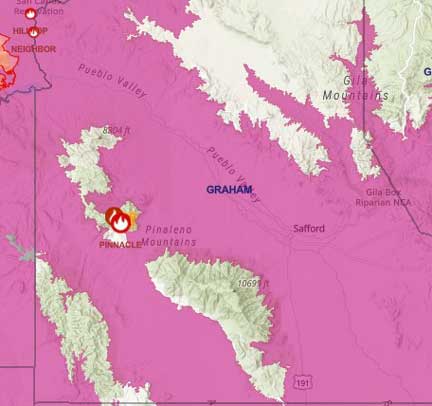 SAFFORD — The Pinnacle fire, west of Safford and north of Klondyke, has grown to about 1,800 acres.

The fire started Thursday in a remote location of the Pinaleno Mountains, and firefighters are positioning for indirect engagement. Cause of the fire is currently undetermined.

The Hobo fire in Greenlee County, northeast of Morenci, is at 600 acres burned and remains at 0-percent containment.

Firefighters are starting to gain ground on the Mescal fire, on the San Carlos Apache Reservation. The fire is at 72,250 acres and is at 77-percent containment. Fire activity is declining and hot spots are decreasing.

However, the Telegraph fire, near Globe, is at 86,529 acres and just 38-percent containment. Slowing firefighting efforts Thursday was the presence of an unauthorized unmanned aerial vehicle, which forced firefighting aircraft to be grounded for a period of time.

Thus far, 20 structures have been lost to the wildfire.

State Routes 77 and 177 have been re-opened to traffic; however, U.S. Highway 60, between Superior and Globe, remains closed.