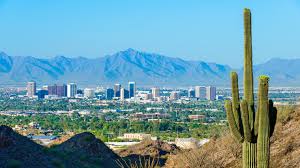 PHOENIX (AP) — Arizona is regularly rattled by small earthquakes, but every now and then the ground shakes hard enough to be felt in its populous Phoenix metro area.

That was the case Sunday night when three small quakes centered in central Arizona rattled houses and jolted residents over at least a 160 mile span.

The quakes were felt from as far south as Casa Grande to as far north as Flagstaff, said Michael Conway, chief of the Geologic Extension Service of the Arizona Geological Survey.

WHERE DO MOST ARIZONA EARTHQUAKES OCCUR?

Look north, in a region known as the Colorado Plateau, including the Grand Canyon, Flagstaff and high country along the Mogollon Rim.

Another part of the state that frequently feels seismic activity is southeastern Arizona, though many of the quakes there are actually centered on the other side of the New Mexico line.

On the other hand, earthquake activity as far south in the transition zone between the Colorado Plateau and the valley-and-mountain areas that include Phoenix, are fairly rare, Brumbaugh said.

The USGS lists the largest earthquake in Arizona as a magnitude 5.6 on the Arizona-Utah border on July 21, 1959.

IS THE PHOENIX AREA PRONE TO EARTHQUAKES?

Not really, though quakes elsewhere are sometimes felt in the metro area.

The USGS website recorded scores of responses from people in Phoenix suburbs who reported feeling at least one of Sunday’s quakes.

“There isn’t a lot of hazard in the Phoenix area from a local event,” Conway said.

While some residents took to social media to make light of the light shaking, others said they were scared.

“It did worry me. It was quite a shake,” said Tami Barto, a Black Canyon City service station manager who said her dogs were rattled by the quakes.

Social media posts included photos of knocked over lawn chairs, garbage cans and even a cactus with the phrase “We will rebuild.”

Others lamented sleeping through the quakes.

Eladio Albornoz Jr. of Mesa said he’s been through much stronger earthquakes in his native Venezuela, so at first he thought the shaking he felt while on his couch was someone playing a joke on him.

“I sat down again and I felt another move. So I was like ‘whoa this is not normal’ and then I read Twitter and everything and found out that it was a quake,” he said.

Shortly after he posted to Facebook, “This little earthquake made me think my house was haunted.”

IS ARIZONA PREPARING FOR A MAJOR QUAKE?

The state Department of Emergency and Military Affairs on Wednesday hosts a statewide exercise to practice responding to a magnitude 7.0 earthquake.

Conway said Sunday night’s shaking in the Phoenix area will likely be noted during preparedness training in schools and other places.

That training urges people to drop down, find overhead cover such as a table and hold on.