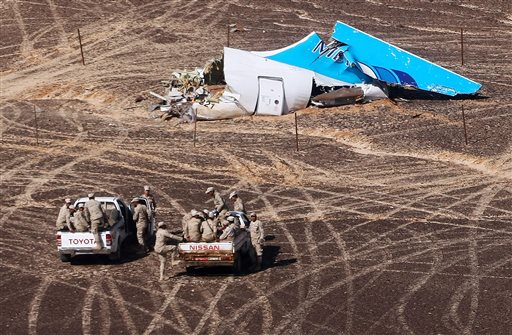 In this photo made available Monday, Nov. 2, 2015, and provided by Russian Emergency Situations Ministry, Egyptian Military on cars approach a plane's tail at the wreckage of a passenger jet bound for St. Petersburg in Russia that crashed in Hassana, Egypt, on Sunday, Nov. 1, 2015. The Russian cargo plane on Monday brought the first bodies of Russian victims killed in a plane crash in Egypt home to St. Petersburg, a city awash in grief for its missing residents. (Maxim Grigoriev/Russian Ministry for Emergency Situations via AP)

NEW YORK (AP) — Investigators are still trying to determine what led to the sudden and catastrophic breakup of a Metrojet plane Saturday over Egypt’s Sinai Peninsula, just 23 minutes after the Russian-operated jetliner took off from the resort of Sharm el-Sheikh.

The Airbus A321-200 was flying at 31,000 feet when the disaster occurred, killing all 224 people aboard, the vast majority of them Russians.

That is generally the safest part of any flight. Just 9 percent of fatal accidents happen when a plane is at cruising altitude, according to a statistical summary of commercial jet accidents done by Boeing.

Typically, such midair breakups are caused by external threats, such as a bomb or a missile, or a massive structural failure from either metal fatigue or an on-board fire.

Here’s a closer look at some of the potential causes of the crash and what investigators will be looking for.

Q: Could this have been a mechanical problem?

A: The airline itself has said no to such a technical failure but investigators have not ruled out anything yet, especially a mechanical issue.

Most aircraft are made of aluminum which is susceptible to corrosion over time. The constant pressurization and depressurization of the cabin for takeoff and landing also puts great stress on the airframe and can eventually lead to tiny cracks. If unchecked, those cracks can grow and threaten the plane’s structural integrity.

In April 2011, a Southwest Airlines Boeing 737 made an emergency landing shortly after takeoff from Phoenix, Arizona after the plane’s fuselage ruptured, causing a 5-foot tear. The plane, with 118 people on board, landed safely. In 1988, a 19-year-old Aloha Airlines Boeing 737-200 that had made frequent, short hops among the Hawaiian islands lost a large part of its roof. Corrosion and metal fatigue were to blame.

Q: Could a prior repair be to blame?

A: The Airbus A321-200 was fixed following an incident in 2001 in which its tail hit the runway. If cracks in the tail section were not properly repaired, they could have grown over the past 14 years and led to a tear under pressure. Jets go through a heavy maintenance check every few years that should have spotted such issues. If the tail were to be lost in flight, pilots would have little control over the jet. In 1985, a Japan Airlines Boeing 747 had an explosive decompression that led to a crash killing 520 people. Investigators eventually blamed the crash on prior faulty repairs.

Q: What about a bomb?

A: Several planes have been brought down, including Pan Am Flight 103 between London and New York in December 1988. There was also an Air India flight in June 1985 between Montreal and London and a plane in September 1989 flown by French airline Union des Transports Aériens that blew up over the Sahara.

Investigators will look for traces of explosives on the wreckage. They will also use microscopes to look at the tearing patterns on the metals and to see if there are tiny divots, indicative of an explosion.

Q: What else could cause such a breakup?

A: There could have been a massive explosion inside the jet from a spark in the fuel tanks or a rapid fire of something in the cargo hold. The 1996 crash of TWA 800 resulted from an explosion in the center wing fuel tank. That same year, the crash of ValuJet Airlines Flight 592 in the Florida Everglades was blamed on a fire in the cargo hold. More recently, a UPS jet in 2010 crashed after leaving Dubai. Investigators later blamed a fire, traced back to lithium batteries in the cargo hold, for the crash.

Q: Could the plane be shot down by a surface-to-air missile?

A: Probably not. A local affiliate of the extremist Islamic State group has claimed it brought down the aircraft, but intelligence experts say they don’t have sophisticated weapons capable of reaching the 31,000-foot elevation the plane was flying at when the disaster occurred. Advanced military missiles have brought down other planes. Malaysia Airlines Flight 17 was shot down by a surface-to-air missile in July 2014 while flying at 33,000 feet over eastern Ukraine, according to a report from the Dutch Safety Board. Korean Airlines Flight 007 was shot down in 1983 by a Soviet fighter jet, and in 1988, the U.S. Navy cruiser USS Vincennes shot down Iran Air Flight 655 in the Persian Gulf.

Q: What about a midair collision?

A: The crash could have been caused by hitting another jet, but no other planes are reported missing and there does not appear to be debris from another plane, ruling out that scenario.

Q: What can we tell from the wreckage?

A: Parts of the jet are scattered across a 7.7-square mile area. That indicates the plane most likely broke apart at a high elevation. When planes crash intact, the debris field is typically more compact. Also, the parts of the plane tend to be broken into smaller pieces than in this crash.

Q: What is the most important evidence in the wreckage?

A: The black boxes, which are actually orange. The flight-data and cockpit-voice recorders will reveal the plane’s speed, altitude, direction and the pilots’ actions during the flight. The cockpit recorder will capture the pilots’ final words. Investigators will also listen for an explosion and see if any of the critical systems malfunctioned.

A: The countries of the former Soviet Union have one of the worst aviation safety records in the world. Only Africa sees more plane crashes than the former Soviet nations, called the Commonwealth of Independent States.

From 2010 to 2014, there were 2.71 jets lost per 1 million flights in those nine nations, compared with a worldwide rate of 0.45, according to the International Air Transport Association. North America has one of the safest records with just 0.13 planes lost per million flights. That means there were 21 times as many crashes in the former Soviet nations than in the U.S., Canada and Mexico.

Q: What do we know about this plane?

At the end of September, there were some 6,500 A320 family jets flying with more than 300 airlines worldwide.

Scott Mayerowitz can be reached at http://twitter.com/GlobeTrotScott.