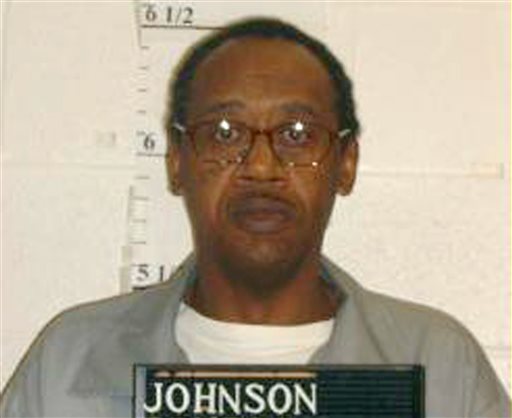 ST. LOUIS (AP) — The U.S. Supreme Court on Tuesday put on hold the execution of a Missouri man convicted beating three people to death with a claw hammer while a lower court considers an appeal.

Ernest Lee Johnson claims the execution drug could cause painful seizures because he still has part of a benign tumor in his brain, and surgery to remove the rest of the tumor in 2008 forced removal of up to 20 percent of his brain tissue.

The Supreme Court granted a stay while the 8th U.S. Circuit Court of Appeals considers whether his complaint was properly dismissed. It wasn’t immediately clear how quickly the appeals court might rule.

Johnson, 55, had been scheduled to die at 6 p.m. at the Missouri state prison in Bonne Terre.

A second appeal, to the Missouri Supreme Court, claims Johnson’s life should be spared because he is mentally disabled.

The Missouri Attorney General’s Office says both claims are without merit.

All three workers were beaten to death with a claw hammer, but Bratcher was also stabbed at least 10 times with a screwdriver and Jones was shot in the face.

Johnson grew up in a troubled home and his attorney, Jeremy Weis, said his IQ was measured at 63 while still in elementary school. Testing after his conviction measured the IQ at 67, still a level considered mentally disabled.

He was already on death row in 2001 when the U.S. Supreme Court ruled that executing the mentally disabled was unconstitutionally cruel and a new sentencing hearing was ordered. Johnson was again sentenced to death in 2003. The Missouri Supreme Court tossed that sentence, too, forcing another sentencing hearing. In 2006, Johnson was sentenced to death for a third time.

The brain tumor was removed in an operation in 2008. While benign, doctors could not remove the entire tumor. Weis said the combination of the remaining tumor and the fact that Johnson lost about one-fifth of his brain has left him prone to seizures and with difficulty walking.

Missouri’s execution drug is a form of pentobarbital believed to be manufactured by a compounding pharmacy — the state won’t say where it gets it. Weis cites a medical review by Dr. Joel Zivot, who examined MRI images of Johnson’s brain and found “significant brain damage and defects that resulted from the tumor and the surgical procedure,” according to court filings.

“Mr. Johnson faces a significant medical risk for a serious seizure as the direct result of the combination of the Missouri lethal injection protocol and Mr. Johnson’s permanent and disabling neurologic disease,” Zivot wrote.

Court filings by the Attorney General’s office note that Missouri has carried out 18 “rapid and painless” executions since it went to the one-drug method in November 2013.

Other death row inmates have had mixed success in pursuing claims that medical conditions should preclude them from execution.

In May 2014, the U.S. Supreme Court stopped the execution of Missouri inmate Russell Bucklew, who claimed the execution drug could cause suffering due to a rare congenital condition that causes weakened and malformed blood vessels as well as tumors in his nose and throat. The case was sent back to U.S. District Court, but remains unresolved.

In March, Cecil Clayton claimed a sawmill accident that damaged his brain in the 1970s should prohibit execution. The courts disagreed, and Clayton, 74, was put to death.