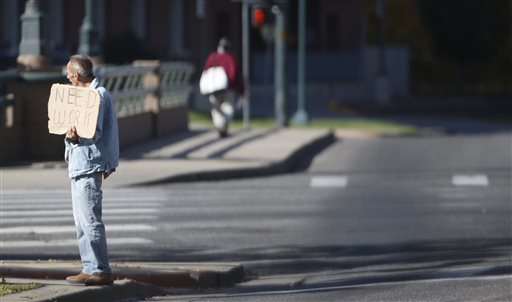 FILE - In this Thursday, Oct. 15, 2015, file photo, a man holds a placard while soliciting motorists for work at a major intersection just south of downtown Denver. Cities trying to limit panhandling in downtowns and tourists areas are facing a new legal hurdle because of a recent Supreme Court ruling that seemingly has nothing to do with asking for money. (AP Photo/David Zalubowski, file)

DENVER (AP) — Cities trying to limit panhandling in downtowns and tourist areas are facing a new legal hurdle because of a recent Supreme Court ruling that seemingly has nothing to do with asking for money.

Federal judges in at least three states have cited a June ruling by the high court on the size of church signs as a reason for overturning anti-panhandling laws or sending cases disputing those laws back to lower courts for review. One of those cases — in the western Colorado city of Grand Junction — has spurred Colorado communities including Denver and Boulder to suspend or change their laws restricting where and when people can panhandle.

The reason is something called content discrimination. The Supreme Court ruled that the town of Gilbert,Arizona, did not have the right to limit the size of signs put up to direct worshippers to services at a small church because the town didn’t set the same limits for real estate or political signs. The same issue has been raised in lawsuits filed by the American Civil Liberties Union and other groups challenging anti-panhandling laws.

U.S. District Judge Christine Arguello ruled on Sept. 30 that it was unconstitutional for Grand Junction to bar people from asking for money after dark and near bus stops and restaurant patios because they singled out a kind of speech — asking for money — for special treatment without a compelling reason.

Arguello had concluded earlier in the case brought by the state ACLU that the law was discriminatory but said the Supreme Court church signs ruling made it clear that laws that limit speech on broad topics, not just particular viewpoints, also amount to content discrimination. She let stand parts of the law that prohibit panhandlers from threatening people.

After the Grand Junction ruling, Boulder quickly got rid of panhandling restrictions along its pedestrian mall, Longmont suspended its enforcement of panhandling laws and the Denver City Council is considering removing its restrictions on when and where panhandlers can solicit money but plans to keeping its ban on threatening behavior. Colorado Springs also suspended portions of its law at the urging of the ACLU before the Grand Junction ruling.

Appeals courts also have sent challenges to anti-panhandling laws in Worcester, Massachusetts, and Springfield, Illinois, back to lower courts to reconsider them in light of the Supreme Court’s ruling. Decisions on both are still pending.

The debate over panhandling laws comes at a time when more cities have sought to restrict where people can ask for money. The National Law Center on Homelessness & Poverty says 76 percent of cities banned panhandling in some locations in 2014, a 20 percent increase since 2011. Many cities say the laws are meant not to discourage giving to people in need but to protect residents and help keep their communities safe.

Mark Silverstein, legal director of the ACLU of Colorado, thinks most panhandling laws nationally have been written so broadly that many of them also will have to be changed because of the ruling. His lawyers plan to tell cities in Colorado about the changes they think are needed.

“The government can’t pass a law to ban all speech that’s annoying or irritating,” he said.

But some cities are not giving up. The city of Worcester plans to fight to keep its limits banning panhandling near bus stops and ATMs as well as standing in medians for any reasons.

“We see it (panhandling restrictions) as one important piece of the puzzle of dealing with the opioid crisis in the country,” city solicitor David Moore said.

In Springfield, panhandlers are barred from going up to people and directly asking for money in the city’s historic downtown, where tourists flock to see Abraham Lincoln’s house. Panhandlers are still allowed to hold signs soliciting donations, city corporation counsel Jim Zerkle said. The city has filed arguments in favor of keeping the law.

In Denver, it’s not clear how much of a difference the proposed changes will make on the street. The city says it’s averaged about 300 panhandling citations a year since its law took effect in 2000 and roughly two-thirds of those violations involved aggressive behavior, rather than violating the time and place limits it’s considering scrapping.

On a recent day, William Jones, 69, was one of several panhandlers set up along the city’s 16th Street Pedestrian Mall not far from one of the parking meters the city installed to raise money for the homeless and discourage panhandling.

Jones, a Navy veteran who has worked breaking horses, as a restaurant cook and in construction, said he does not care for the aggressive style. He sat on his walker with a sign, saying good morning people and waved back at a passing bus driver and an outreach worker from a homeless shelter.