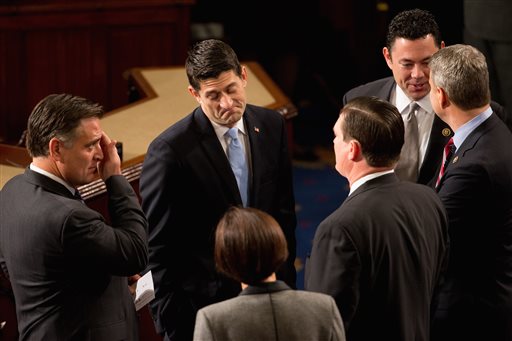 Rep. Paul Ryan, R-Wis. speaks with members of Congress in the House Chamber on Capitol Hill in Washington, Thursday, Oct. 29, 2015, before he is expected to be voted in as the new House Speaker. Rep. Jason Chaffetz, R-Utah is second from right. (AP Photo/Andrew Harnik)

WASHINGTON (AP) — The ambitious budget and debt deal cleared a major hurdle in the Senate early Friday, setting the stage for Congress to pass the measure and send it to President Barack Obama.

The Senate voted 63-35, gaining the 60 votes necessary to end any delaying tactics. Several of the GOP presidential candidates had criticized the legislation, which is aimed at averting a catastrophic default, avoiding a partial shutdown and setting government spending priorities for two years.

Obama negotiated the accord with Republican and Democratic leaders who were intent on steering Congress away from the brinkmanship and shutdown threats that have haunted lawmakers for years. Former Speaker John Boehner felt a particular urgency days before leaving Congress, while lawmakers looked ahead to presidential and congressional elections next year.

The opposition was strong in the Senate, and White House hopeful Sen. Rand Paul, R-Ky., left the campaign trail and returned to the Capitol to criticize the deal as excessive Washington spending.

Cruz canceled campaign events in Nevada to return to Washington for the votes. Speaking on the Senate floor late Thursday, he said the Republican majorities had given Obama a “diamond-encrusted, glow-in-the-dark Amex card” for government spending.

“It’s a pretty nifty card,” Cruz said. “You don’t have to pay for it, you get to spend it and it’s somebody else’s problem.”

The agreement would raise the government debt ceiling until March 2017, removing the threat of an unprecedented national default just days from now. At the same time, it would set the budget of the government through the 2016 and 2017 fiscal years and ease punishing spending caps by providing $80 billion more for military and domestic programs, paid for with a hodgepodge of spending cuts and revenue increases touching areas from tax compliance to spectrum auctions.

The deal would also avert a looming shortfall in the Social Security disability trust fund that threatened to slash benefits, and head off an unprecedented increase in Medicare premiums for outpatient care for about 15 million beneficiaries.

The promise of more money for the military ensured support from defense hawks like Sen. John McCain, R-Ariz., chairman of the Armed Services Committee, while additional funds for domestic programs pleased Democrats.

Obama and Democratic allies like House Minority Leader Nancy Pelosi of California were big winners in the talks, but GOP leaders cleared away political land mines confronting the party on the eve of 2016 campaigns to win back the White House and maintain its grip on the Senate.

The measure leaves a clean slate for new Speaker Paul Ryan, R-Wis., as he begins his leadership of the House.

Obama had repeatedly said he would not negotiate budget concessions in exchange for increasing the debt limit, though he did agree to package the debt and budget provisions.

“I am as frustrated by the refusal of this administration to even engage on this (debt limit) issue,” said Finance Committee Chairman Orrin Hatch, R-Utah. “However, the president’s refusal to be reasonable and do his job when it comes to our debt is no excuse for Congress failing to do its job and prevent a default.”

The budget relief would lift caps on the appropriated spending passed by Congress each year by $50 billion in 2016 and $30 billion in 2017, evenly divided between defense and domestic. Another $16 billion or so would come each year in the form of inflated war spending, evenly split between the Defense and State departments.

The Appropriations committees will have to write legislation to reflect the spending and face a Dec. 11 deadline.

The cuts include curbs on Medicare payments for outpatient services provided by certain hospitals and an extension of a 2-percentage-point cut in Medicare payments to doctors through the end of a 10-year budget. There’s also a drawdown from the Strategic Petroleum Reserve, and savings reaped from a Justice Department fund for crime victims that involves assets seized from criminals.